The National Union of the Homeless and Food Not Bombs presents:

Memorial Day, 2020 Veterans, homelessness and  hunger in a time of pandemic.

Forty years of feeding the people and organizing the homeless. 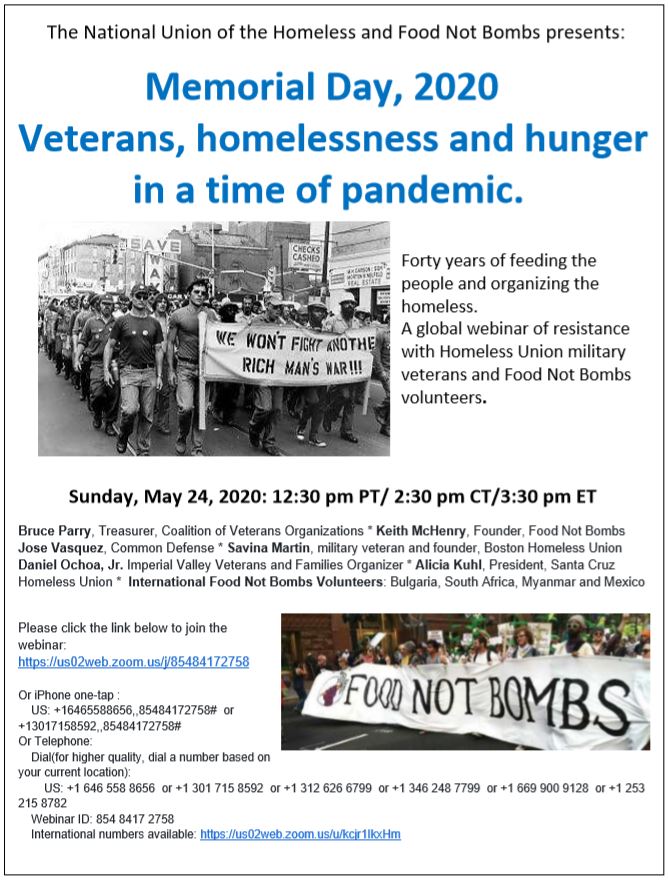 Officers and Supporters of the National Union of the Homeless:

We had originally planned a Memorial Day webinar for May 24, 2020 focused on veterans, homelessness and the pandemic. However, we became aware that because of the lockdown, a public celebration and concert marking the 40th Anniversary of Food Not Bombs scheduled for the same day in Santa Cruz could not take place. We decided we could not let the anniversary of an organization that has been with the Homeless Union movement from the beginning go unrecognized. And so we have expanded the Memorial Day webinar and have put together a fantastic team of military veterans, Homeless Union leaders and Food Not Bombs volunteers from around the world. We are especially honored to have Brother Keith McHenry, creator of Food Not Bombs and now an officer in our National Union join the program.

Food Not Bombs (FNB) was established in 1980, when Ronald Reagan became president and began an unprecedented shift of funding away from programs for poor people and into a massive expansion of the military budget including “Star Wars” and other war profiteering projects. FNB responded by feeding poor and homeless people in the parks and on the streets; its name was a political protest saying “we should be feeding the hungry, not feeding the military industrial complex: Food, NOT Bombs!”

FNB was with the original Homeless Union from the beginning, cooking for the homeless and supporting the Union actively. Keith McHenry, who founded FNB, was beaten and arrested in San Francisco and Oakland for helping us with our housing takeovers. In the film “Takeover”, you can see Keith being clubbed by police after a confrontation at Oakland City Hall. Keith has been arrested hundreds of times by defying laws against feeding the poor and homeless. He still suffers from nerve damage from a savage beating by the San Francisco police while in custody and has spent over 500 nights in jail. Today, Food Not Bombs has over 400 chapters in the U.S. and 1,000 across the world. It is the longest running poor people’s “Project Survival” in history.

Keith joined the Santa Cruz Homeless early last year and since then has forged a real partnership with the Union that we hope will become a national and world-wide model. FNB had originally scheduled a major 40th Anniversary rally and concert in Santa Cruz for May 24, which now cannot take place because of the pandemic. In discussing the situation with Keith we would like to now propose is that we go ahead with our Memorial Day Homeless Union Webinar on veterans, homelessness and the coronavirus crisis, but share the event with Food Not Bombs to mark its 40th anniversary. The Webinar will take place on Sunday, May 24, 2020, the day before the federal holiday on May 25.

This will be an International event that could possibly draw thousands of participants. Forty years since FNB was formed, we now see that the expansion of the military budget has come at the direct expense of the poor, including millions of poor, disabled and homeless veterans, made even more desperate and obvious by the current pandemic. This Memorial Day, we can bring these issues together to help build our Union and our movement.

Hoping you are all staying strong and safe,