Defunding the Police: On the road to abolishing oppressive policing 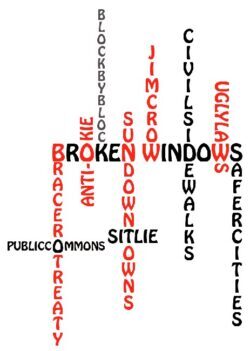 Black Lives Matter and other abolitionist groups are leading communities across the country to recognize that the criminal justice system is a powerhouse of violence and white supremacy. Policing was racist at birth, with its origins in scalping Indigenous people and kidnapping Black people escaping slavery. It has a long history of keeping non-white property owning people “under foot” and disempowered. From Reconstruction to Jim Crow and up to the present, the police budget has continued to grow, and so too have the oppressive laws that target poor people, Black people, Indigenous people, and people of color. Selective enforcement of the law is a pretext that justifies siphoning money from the public good and instead criminalizing peoples’ very existence. Abolition is the only solution. With that comes an opportunity to redirect funding away from the bloated police budget and into the hands of community members, who will support and empower rather than terrorize. As we work to defund the police, its racist, classist systems and laws must go as well. We need to eliminate the police force’s myriad Specialized Units, which, among other things, are tasked with responding to homelessness and enforcing the hundreds of laws that prohibit basic survival activities. We need to overturn Privatized Policing Programs, which use public money to bolster the power of property owners. We need to abolish policing once and for all, and in its place foster healthy, vibrant, and liberated communities.

In conjunction with defunding police departments more generally, eliminating the laws that police use to target poor and homeless people is a critical step towards a more just society. This country has a long and brutal history of enacting laws that specifically aim to remove the presence of poor people, especially Black people and Indigenous people, from our communities. Ugly Laws of the 1860s, the Sundown Towns, Anti-Okie Laws, and Jim Crow laws are a few examples of targeted laws that have wielded the power of police departments to enforce blatantly discriminatory, racist, and oppressive social control. Some, such as Vagrancy Laws criminalizing homelessness, were not overturned until 2018. This brutal history is in many ways a recent history, and a blatant injustice we live with now.

The books remain filled with laws that continue to criminalize basic survival activities, such as standing still (“loitering”), sitting, sleeping, laying down, eating, hanging out on the street corner, and sharing food. These laws are often deployed in the process of “sweeps”—evictions—of people with nowhere else to go. Today, they are used as a “tool” that addresses homelessness by criminalizing people with no housing and justifies inflated police budgets. These laws are selectively enforced to appease people in power and to try to make homelessness disappear, just as they have been used to appease and make others disappear in the past.  In 2018, WRAP member groups conducted a survey of 1,657 homeless people regarding their interaction with policing and the main “illegal offenses” that people are being targeted with. Eighty-two percent reported being harassed, cited, or arrested for sleeping, 77% for laying down, and 75% for loitering. Among those surveyed, 1,275 people reported that they had been targeted by the police based on their economic status, and 597 people said they were targeted because of their race. If these laws were ever enforced without discrimination, everyone would be guilty of breaking them; instead poor and homeless people — especially those who are Black, Indigenous, and Latinx — are targeted.

Too many laws deny people who are homeless basic civil and human rights and harm our communities. Decriminalizing survival activities, such as sleeping, standing still, and eating—eliminating key laws that facilitate white supremacist policing, in other words—is a simple solution and requires absolutely no funding. Additionally, eliminating such archaic laws would immediately allow for the reallocation of enforcement funding into local community control and efforts that promote health, education, and housing opportunities for all. With the elimination of clearly racist and oppressive legal codes, there would be no justification for the police to harass poor and homeless people, and end the incarceration of people based on their housing status, the color of their skin, or a disability. As we work to defund the police, these laws must go as well. 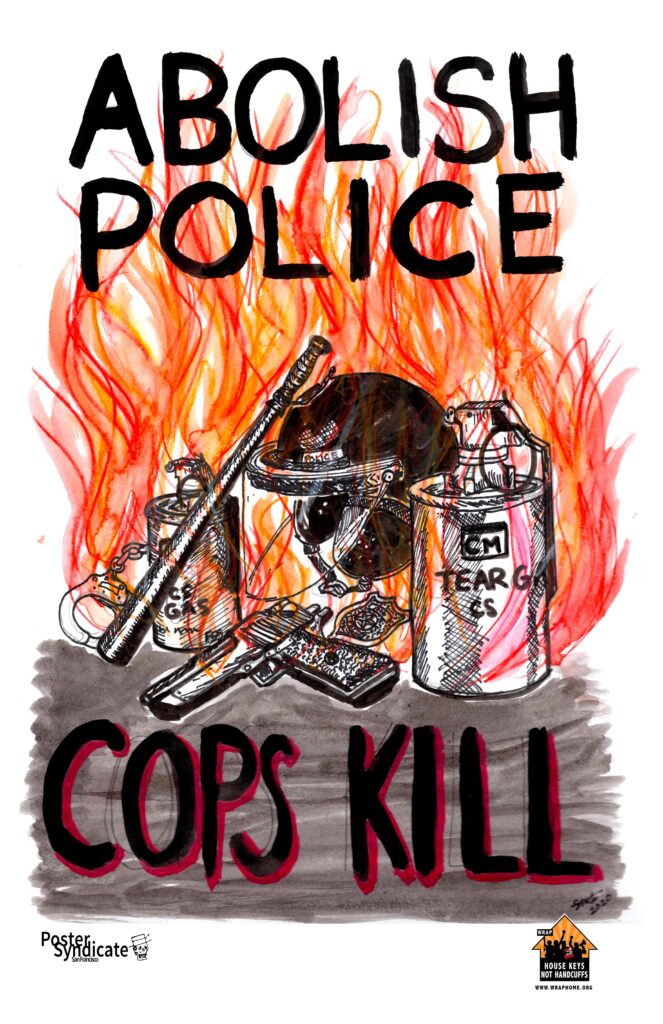 As communities look towards defunding oppressive and violent police forces and their discriminatory practices, it is also important to scrutinize the growing prevalence of Specialized Units within local police departments. Coinciding with the advent of contemporary homelessness in the early 1980s after Reagan cut HUD’s budget by nearly 80%, Specialized Units such as “Homeless Outreach Teams,” “Homeless Abatement Teams,” and “Homeless Liaison Officers” have spread like wildfire across the country. These units operate on the fallacy that police should be at the forefront of addressing social issues. We have borne witness to the lethal contradiction between the supposed intent of these units and their oppressive applications. Such specialized policing has perpetuated a myth that police departments need to pay special attention to, control, and eliminate the presence of people who are unhoused in our community. Disproportionately poor people of color — housed or unhoused — are the targets of police oppression. With Specialized Units, police departments have created an industry that drains millions and millions of dollars in local, federal, and corporate foundation funding under the guise of “helping” the homeless.

Irrefutably, police department staffing and funding has no bearing on solving homelessness. Millions of people are living without housing in the US, and the policing apparatus has never been capable of addressing this issue. Increasing cops will never decrease homelessness. Clearly, the sole purpose of policing in this context is not to address homelessness but rather to mitigate the visibility of homelessness and its impact on business and property interests. The millions spent perpetuating such fraud and oppression should immediately be cut from police departments and reallocated to the community, who can then dictate where those funds serve the greatest public benefit. For too long, police departments have exploited funding cuts for healthcare, housing, and residential treatment programs that should be at the service of community members. Instead, they have amalgamated funding, staffing, union power, and social control over issues of poverty, racism, classism, and ableism. This is a self-perpetuating machine. Specialized Units were never intended to help the people they target. Instead, they have become modus operandi for police departments intent on increasing their wealth and power — and those of largely white and often corporate property owners — by degrading and dehumanizing the existence of poor people.

Business Improvement Districts (BIDs) are key entities that legitimize the use of public funds to privately police public space. BIDs are bounded geographic areas in which mandatory fee assessments are levied on property owners, including public agencies. There are more than 1,200 BIDs in US cities, spanning a few to a few hundred blocks each. The vast majority of funds collected via BID assessments pay for private security and additional police patrols whose primary purpose is to surveil and control poor and homeless people within the BID. BIDs also use their funds to advocate for the enactment, preservation, and strengthening of local and state laws that violate the rights of poor and homeless people. The hyper-oppressive command and control policing that BIDs promote impacts our whole community, including street vendors, buskers, artists, day laborers, protestors, homeless people, local residents, and people who are shopping whom security guards deem untrustworthy. BIDs have a long and well-documented history of increasing violent conflicts between police, security, and poor and homeless people, the overwhelming majority of whom are BIPOC. In short, BIDs use legally required and publicly collected money to lobby for anti-poor people laws, ambassadors, police, and armed private security, who regularly arrest, cite, harass, and remove poor and homeless people from public spaces.

WRAP’s core member groups have long demanded that local governments end the criminalization of poor and homeless people and, especially relevant to this moment, stop all  public funding of and revenue collection related to BIDs. Dismantling the structures that allow for the private policing and criminalization of poor and homeless people is particularly urgent in this moment of community demands to defund police. Given the racist and oppressive history of policing in the US, we need to make sure that as public policing is defunded, private policing does not become the go-to solution.

Fund the People, Defund the Police 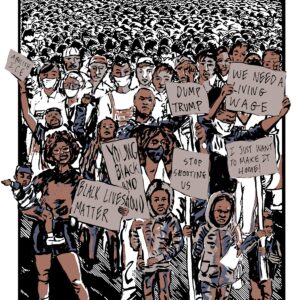 Making our communities safe requires not only the defunding of police departments, but also dismantling discriminatory laws that target survival activities such as sleeping, sitting, lying down, and eating in public space: removing such historically discriminatory laws from the books eliminates the justification for increased policing to enforce them, including Specialized Units and systems of publicly-funded private policing.

The recent seismic uprisings in support of dismantling racist, classist structures of policing have made clear that the romanticized refrains of Constitutionally-endowed equality and pursuit of happiness are bullshit. This framework applies only to white property owners and the wealthy elite, both historically and at present. The overwhelming majority of people in the US at the time this framework was drafted and implemented — women, Indigenous people, enslaved people, poor people, non-white people — were not among those included in the declaration, “All Men Are Created Equal” as it was written and remains celebrated today. The military apparatus, the distribution of wealth, the government and representation therein, and policing are the basis of suffering. For far too long, we have lived under systemic racism, systemic classism, and a systemic lack of meaningful representation within our structure of governance. As people today are calling to defund or abolish policing as an apparatus of oppression, we need to always stay mindful of police as one brick in the wall that has divided the “entitled” from the “non-entitled.” The entitled are prioritized within our local, state, and federal governmental structures. Meanwhile, those who are not entitled find their livelihood, healthcare, housing, employment, and education either completely ignored or addressed as matters of charity, and therefore only available to the worthy or the eligible or the compliant. When these structures of racism, colonization, and neoliberalism are finally torn down and reimagined, we will have created a form of community governance that sees in itself a structure that finally and truly embraces the American ideal of a government of the people, by the people, for the people.