As we saw with Mayor’s Feinstein, Agnos, Jordan, Brown and Lee before him, (acting, interim, political pawn) Farrell is using the power of his office to attack people in our community who have no home. He blames homeless people despite the fact that homelessness has been persistent and growing in every state and town throughout the U.S. since the early 1980’s. 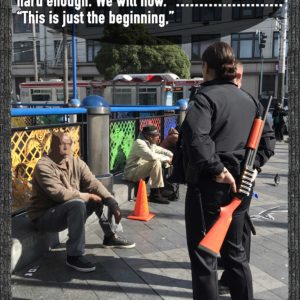 Feinstein matched her sweeps with a Hotline Hotel Program, Agnos with a plan and Multi-Service Centers, Jordan with Cops, Outreach Vans and more cops, Brown with – well, a call for Oaklands’ heat seeking police helicopters and a “Homeless Czar” and Lee with creating a giant new city bureaucracy. All of these “programs” premised on the fact that once people are swept they will never ever appear on our streets again. A failed premise, since everyone knows they have nowhere to go, and people are becoming newly homeless each day as they lose their housing to real estate speculators. Farrell seems to be relying on a combination of Jordan, with Police and DPW being the lead city departments mixed in a the rhetoric of Trump.

“There is a service resistant population that just wants to be there, again this is the population the contributes to the crime, to the arson, to the rapes, to the additional public safety issues.” – Farrell regarding homeless people in SF.
“When Mexico sends its people they are not sending the best….. they’re bringing drugs, they’re bringing crime. They’re rapists, and some, I assume, are good people.” – Trump regarding people from Mexico.

Though Farrell left out Trump’s disingenuous “some good people part” the intent of his language is the same. “These people” are evil, dangerous rapists and don’t want all the wonderful things we have to offer. Jordan at one point claimed we were selling guns out of our shopping carts, so really the Trump, Farrell, Jordan comparison is plain to see.

While we hear Jeff Kositsky, Mohammad Nuru and Mark Farrell talk on and on about all the “consistent and loving outreach” they are doing, the reality is this particular operation contained none of that. A small group of people in the Mission were moved 4 times on Friday. Each time the cops sweeping them told them where they had to move, which they did, only to then have another squad of cops show up and tell them they had to move to a different place, which they did again, and again, 4 times in one day. Consistent maybe, loving absolutely not and most of all – considering the people moved as told each time, resistant is not the word to describe them. And no services were ever offered, which is consistent as well.

Another consistent aspect of what is happening right now is the fact that it follows directly on the heels of another major push by the Tourist, Hotel and Business Improvement Districts to “Clean up SF’s Streets”. Clean up the streets may sound like brooms, street sweepers and garbage cans to you, yet to the Chronicle and business community “cleaning up the streets” is about the removal of people who have no option but to live in them. Four of the five photos that accompanied the article on April 16th, were pictures of houseless human beings, the other was of Joel D’Alessandro president of SF Travel, “The streets are filthy. There’s trash everywhere. It’s disgusting.” Sweeping people as though they are trash is not new, is not ultimately effective in addressing homelessness and certainly is not humane. It is also a response that has happened whenever the Hotel, Tourist and BID’s have put on a big push. 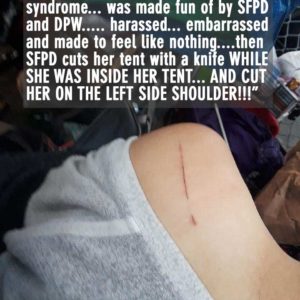 We know how to do it right. Just one example, when there was an encampment on King Street, Cal Trans kept removing it, and then the people would come right back. They developed a community and even grew food. Many of the residents were in very bad shape with severe behavioral health impairments. Former Homeless Director Dufty very thoughtfully laid our a relocation plan, developed in conjunction with residents, and they were able to move everyone successfully into housing. They were thoughtful about family makeup, property, pets, transportation, storage. The effort was wildly successful.

It is long past time for SF to get real, after 35 years (we, along with many many many other cities opened our shelter system in October 1982) we have learned homelessness is not going to end by trying to sweep it under the rug. All this does is make us colder, nastier and more frustrated that “nothing” works. There very clearly are things that can work. In fact it is ridiculously simple what it takes to have something that works – Nothing ends homelessness like a home.