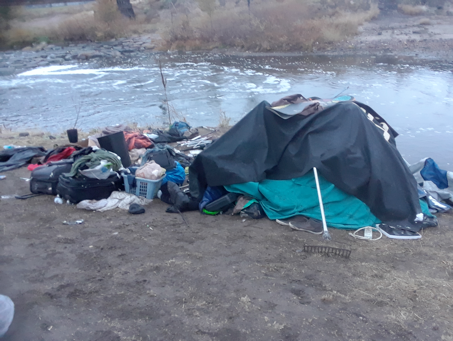 Today, November 7 2017, Denver Park Ranger took a homeless man named Jackson’s tent, sleeping bag, and blankets and left his other possessions and trash from inside the tent strewn about. This was done on a day when it is 25 degrees and snowing. Jackson has been surviving on the river in this spot for months. Two friends were present with his stuff when the park ranger came and took Jackson’s property. These friends informed the park ranger they were there watching his stuff and the park ranger took it regardless.

At the same time as this happened Denver Police were actively forcing homeless people by the Mission and all over the city to “move along.”

This is all taking place as the class action lawsuit against the city of Denver for the homeless sweeps is in progress before the federal district court. The constitutional rights founding this law suit – 4th amendment to property and 14th amendment rights to due process of law – continue to be violated by the city of Denver every day.

Read Jackson’s open letter to Ranger Eric demanding his property be returned below and attached.

Watch video of the aftermath of this sweep here

Winter is here and the city is taking homeless people’s survival gear on freezing snowing days putting people’s lives at sever risk. This MUST END.