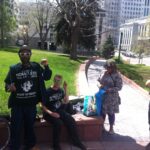 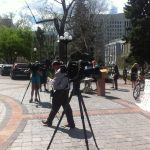 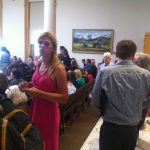 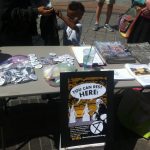 On Wednesday April 19, 2017, the Local Government Committee of the Colorado State Legislature voted 5 to 8 against the Right to Rest Act – the right to sleep, sit, cover oneself, share food, sleep in your own vehicle.

After three years of bringing the Right to Rest Act to the Colorado State Legislature and having our rights – our humanity – voted down, our resolve, our movement, our power just grows. We know this is a long haul struggle. History has shown us that in order to succeed in overcoming discriminatory practices, communities must stand strong together and the fight takes years.This vote against humanity came at the end of an 11 hour hearing including testimony from over 60 people supporting the Right to Rest and only 5 people who testified in opposition. Person after person supporting the right to rest testified to being threatened, having their belongings stolen and being forced by police to “move along.” Lawyers, business owners, service providers and faith leaders each spoke to the unconstitutional, dehumanizing and moral impacts of criminalizing existence. And person after person testified to how this bill does not create “special rights” for homeless people, but protects the rights of all people to stand, sit, lie down, cover oneself – exist – in public spaces.

The Right to Rest Act, introduced through the Western Regional Advocacy Project in Colorado, California, and Oregon, aims to end all laws and practices to push certain “unwanted” communities out of public space. Our county has a long history of racist, classist laws – Jim Crow, Anti-Okie, Sundown laws – used to push certain people out of public spaces and anti-homeless ordinances are just another example.

The Right to Rest hearing on Wednesday was a powerful demonstration of a people who will not be hidden, silenced, or treated as less than human. For the third year in a row we packed the committee room with a collective energy that will not go away, but rather continues to grow. As homeless and poor people, we know what is really going on in the streets. In closing comments Representative Lebsock, who voted yes, said “today we heard reality versus reporting.” Reality from people living on the streets, and reporting from city officials reporting numbers of shelter beds, housing units being developed, and money being spent. Reality was spoken loud and clear – “we will continue to exist and survive in public spaces no matter how much you try to hide us.”

The Representatives who voted NO against the Right to Rest justified their vote by expressing concern that this bill will create a “free-for-all” with homeless people sleeping and sitting everywhere, that there will be endless lawsuits against cities, that local municipalities need local control to use “tools” to deal with their homeless population, and that they want to “solve homelessness” not create rights. They had no shame in expressing their perception of the sight of visibly homeless people as “bad for business.” They had no shame in defending businesses and cities from the potential law suits they would face – never considering that instead they could just respect people’s rights.

Five Representatives voted YES for the Right to Rest this year. Their vote and words of support for a bill that simply asks we be allowed to sleep, sit, not have our blankets taken, are a sign of hope and humanity! We thank Reps Lebsock, Singer, Coleman, Exum, and Valdez! Furthermore, this bill would not be real without the incredible leadership and commitment of Reps Salazar and Melton sponsoring the Right to Rest three years in a row, standing strong against internal party division, and standing up for what is right!

Our work does not end. As homelessness will continue to persist with more housing budget cuts in sight, and while criminalization does absolutely nothing to actually end homelessness, we will remain right here, growing in numbers, demanding justice. We have no place left to go. We have no other choice but to fight for our rights to survive. Our solidarity with each other and strength in fight against our humanity only grows. Our fight continues right now and onward in the city councils, in the federal and local courts, back at the state capitol next year, and on the streets everyday!!