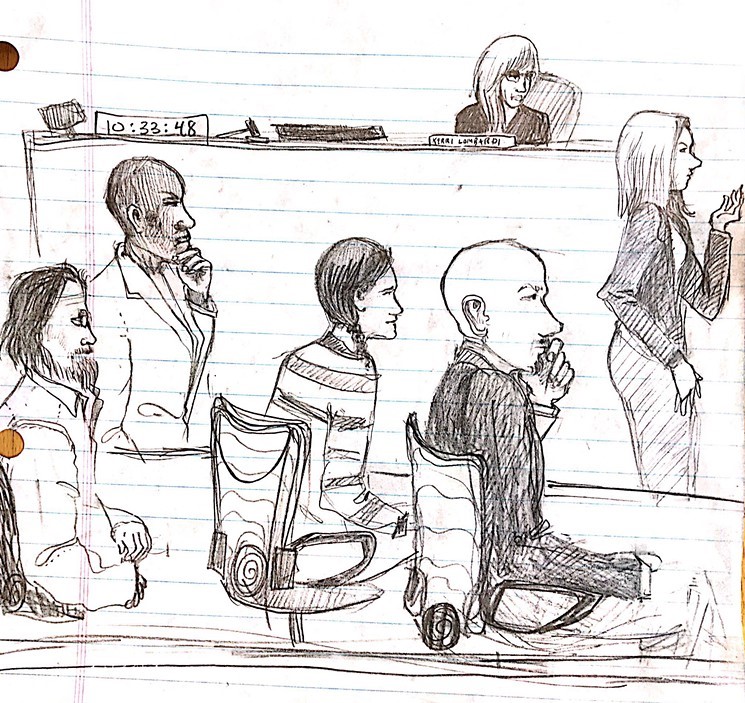 In an unprecedented case for Denver, 3 defendants were convicted by a jury of 6 Denver residents for the crime of surviving in public space. Defendants Jerry Burton, Terese Howard and Randy Russell were charged under Denver’s Unauthorized Camping Ordinance (38-86.2). It was not an easy decision for the jury, that much is clear. City attorneys instructed them to leave their “social outlook” and “opinion of Denver’s Unauthorized Camping Ordinance” out of their decision-making process. Still, the six took over 3 hours to deliberate and at one point even called the defendants in to ask them, “If we convicted you, could we help you pay your fine?”

This is the first time that anyone charged with Denver’s Camping Ban has brought the case to a jury trial. Most defendants ticketed under this ordinance, lacking in resources as they are, have taken the city’s offer of a plea deal in order to avoid harsher punishments. After the three defendants in this case refused the city’s plea offer on February 16th, each defendant had additional charges of “interference with a police officer” added to their case by the City of Denver. Ultimately, both Burton and Russell were convicted of 2 counts of “Camping”, while Howard was convicted of one count of camping and one count of interference. All three were ordered to probation and mandatory community service.

During jury selection, at least half a dozen prospective jurors disqualified themselves to judge the case at hand – from the City’s point of view –because they expressed opposition to the prosecution and the law’s very existence. When questioned as to whether this was an appropriate case to judge fairly, one juror responded stating, “I don’t feel like this is the appropriate case for anyone to judge.”

Between Burton, Howard and Russell, the three defendants were facing 10 charges total, all stemming from police interactions on November 28th, 2016. That morning, Denver Police woke defendants Burton and Russell from their sleep at 27th and Arapahoe, and seized the defendant’s’ tents and sleeping gear as evidence of a crime. Later that evening, dozens of homeless people, who had likewise been evicted from their makeshift homes across the city, went with Burton and Russell to the City and County Building in Downtown Denver to find refuge. Around midnight, police came and ticketed Burton and Russell again, along with Terese Howard, who had joined them at the City and County Building. A Youtube video of the incidence, including footage of police stealing Burton and Russell’s blankets went viral in the following days. This pushed Denver’s Mayor Hancock to issue a directive to Denver Police to no longer seize blankets while enforcing the camping ban.

The defense had already been holed into a very narrow legal box before the trial even began. City attorneys asked the judge in pre-trial hearings to bar the defense from several important strategies: the defense could not mention the concept of jury nullification, or argue their innocence based on the “necessity defense”. Jury nullification is a powerful (yet not well known) tool which allows juries to refuse to convict a person based on the unjust nature of the law. The “necessity defense” would have allowed the defense to argue that homeless people had no choice but to break the law, and thus cannot be convicted of “crimes” such as sleeping and surviving in public. The city’s motions to ban the defense from these legal truths were passed by Judge Kerri Lombardi. The city’s legal strategy, of course, was to try and frame the case as to have “nothing to do with homelessness.” At that same Feb. 16th motions hearing, Judge Lombardi even stated that the defendants’ being homeless was “irrelevant” to the case.

All three defendants rejected the language of camping as a distortion of the reality facing homeless and poor people throughout our city instead referring their surviving, not recreating. Throughout Watadaa’s line of questioning, Russell refused to accept the term “camping”, and eventually Watadaa reluctantly asked him, “You know it’s against the law for you to survive in Denver?”.

And during her closing remarks, Watadaa included the following outrageous statement referring to Police Sergeant Scutter’s testimony, “The Sergeant told Mr. Russell, you can’t be anywhere!”

In imposing her sentence, the Judge chose not to impose any area restrictions, stating that they didn’t make any sense; “You live there,” she stated, admitting that the defendants would likely be back on the street tonight. “You could get ticketed,” Judge Lombardi told them, “You’re taking a risk.”

Terese Howard, the last defendant to give her sentencing remarks, reminded the court that this case was not just about the three defendants alone. “We have brought this case to the people to find justice,” she stated, “but we have found that the system is not ready for justice at this time.” She specifically called out the judge for her part in entrapping the jury into reading such a narrow definition of the law as to eliminate the possibility of justice.