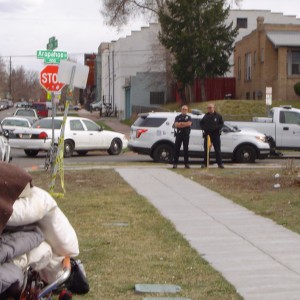 On, Wednesday March 9th 2016, Denver City Officials continued to sweep people surviving on the streets in effort to push people “away….” The sweeps did not end on Tuesday. And they appear to be continuing indefinitely as people have nowhere to “move along” to. Tuesday many of those swept from the Samaritan house area moved over a couple blocks away around the vacant lots where Resurrection Village f…irst was built as tiny homes and continues to survive with tarps on public land. Others moved farther off to the river – which is usually consider the place to go to avoid police moving you along.

But today, Wednesday, City officials sent police and clean up crews around the public land between 24th and 28th and Arapahoe and Lawrence (and possibly even more that we don’t know about) and kicked everyone out of the spots they had set up tarps, shopping carts, and some just with sleeping bags to survive under. At the same time they swept the river kicking people out, taking any belongings left, and telling people they could not “camp.” People who moved from Samaritan area, which was supposed to be the the target of the “order of removal” by the City, to the river thinking this would be a safe spot where cops would not bother them were simply kicked right back to the streets they came from. The City Officials, under Mayor Hancock, have decided the answer to homelessness is to kick people trying to survive without homes around like dirt. Or as one cop put it when asked what they want to come of all this, he replied, “we just want them to go away.”

At this very same time we know people without homes are being swept from survival camps in San Francisco and Los Angeles.

We are human. We have no choice. We have to rest and exist somewhere. The city can keep trying to sweep us away but it won’t work. There is no “away” to go to… We cannot afford homes. Wages, SSI, Disability, none of these equal the cost of rent. We will not or cannot live in shelters. We have to survive somewhere. It is time for the people of Denver, and the world, to call this injustice to an end.

Donate Sleeping Bags, Tarps, or Tents! Call Denver Homeless Out Loud at 720-940-5291 to coordinate drop off. 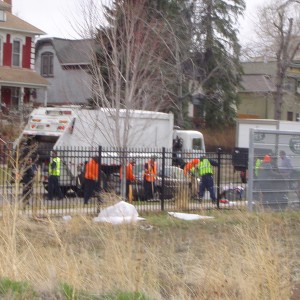