This is NOT solving the homeless crisis. This is punishing people for being poor and houseless. This is BEYOND shameful. 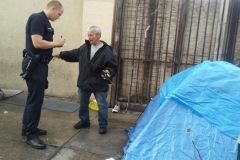 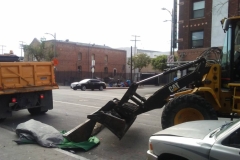 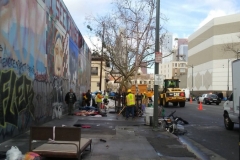 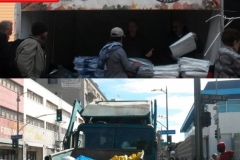 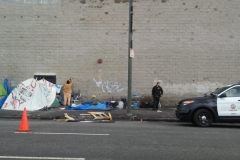 In 24 hours – there have been two major homeless sweeps in Skid Row (under the auspices of “Operation Healthy Streets”). We have documented AT LEAST 5 arrests (all for warrants for non-violent crimes related to being homeless) and over a dozen cases of tents, tarps, blankets and other property being DESTROYED by the City of LA.

Mayor Eric Garcetti, Jose Huizar, Herb J. Wesson, Jr., Marqueece Harris-Dawson, Gil Cedillo, Joe Buscaino, Mike Bonin – is THIS your “Comprehensive Homeless Strategy”? Taking away the only means that houseless people have to shelter themselves from the rain? Giving people tickets for having their tents up during storms? Threatening arrest if people don’t take their tents down? Telling people they have to go to shelters or have their property destroyed?

City of LA sponsoring a tarp program for homeless people in Downtown on Thanksgiving and then destroying them during #ElNino storms. Let that sink in.

Is this ending homelessness? Is this helping the person using those tarps to shelter themselves from thunderstorms get off the streets?

No. This is immoral, ineffective and a COMPLETE waste of resources – resources that should be creating permanent homes instead of being used to support the short-sighted political agenda of our elected officials.

This is what homeless “criminalization” means:
A homeless resident who COMPLIES with Operation Healthy Streets – moves tent and property for cleaning as asked – and STILL has her property taken and destroyed after being arrested. Then she spends 3 days in jail and her husband has to sleep on the street without any tent, blanket, or tarps.