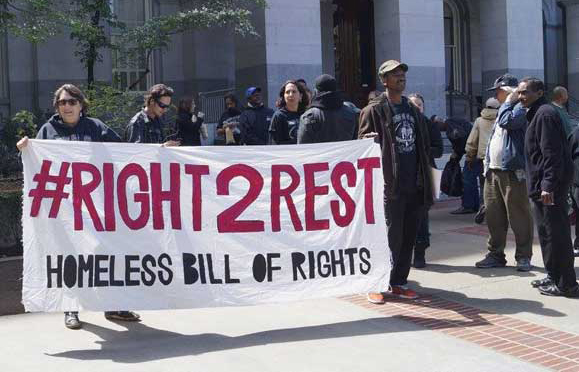 According to Senator Liu, “this bill is intended to ensure equal rights for the homeless. It’s time to address poverty, mental health, and the plight of the homeless head-on as a social issue and not a criminal issue. Citing the homeless for simply resting in a public space creates a criminal record that can lead to rejection for jobs, education loans, and housing and further block their pathway out of poverty,” she added.

According to a 2015 report by the UC Berkeley School of Law Policy Advocacy Clinic, the number of anti-homeless laws passed by California municipalities has risen sharply in recent years. In total, the 58 cities researched in the study have enacted at least 500 anti-homeless laws – nearly nine laws per city on average.

Recently announced efforts to combat homelessness include California State Senate President Pro Tempore, Kevin de León’s bi-partisan “No Place Like Home” initiative, which would provide 2 billion dollars for cities to build permanent supportive housing for the homeless. Coupling housing with treatment for mental illness and other wrap-around support services provides a long-term, sustainable solution to homelessness. However, funding for housing and wrap-around services is just one piece of a multi-pronged strategy that must also include putting an end to criminalizing the homeless.

“We applaud sincere efforts to build more permanent supportive housing, but no plan or strategy to end homelessness is complete without ceasing the failed policies that ticket or jail people for sleeping, eating, or sitting in public when they have no other place to go,” says Paul Boden of the Western Regional Advocacy Project, which coordinates the coalition of 140 organizations across the state that are supporting SB 876. “Even if we get new money to build the housing we critically need, it will take time to develop those units and house people. Cities cannot continue to make illegal the basic life-sustaining activities of people who have no other choice but to live in public.”

The growing rate at which cities are criminalizing homelessness is not unique to California. Rather, it reflects a national trend in practices that are increasingly being challenged in federal courts. In December 2015, a federal judge suspended a Ft. Lauderdale law banning public food sharing after a 90-year old resident was arrested twice for serving meals to homeless individuals.

“SB 876 is consistent with the federal government’s condemnation of practices that criminalize homelessness and violate their civil rights,” said Maria Foscarinis, Executive Director at the National Law Center on Homelessness & Poverty. “Under this bill, we hope communities will apply their resources to develop housing and other services for the homeless. Such strategies are less expensive and more successful at ending homelessness than criminalization; a practice the U.S. Department of Justice has said is unconstitutional.
For more information go to: www.wraphome.org
contact us at: wrap@wraphome.org