As part of our 10-year celebration, we sat down with a few of the many, many people who make WRAP happen. Today’s reflection is from Art Hazelwood, long-time WRAP supporter and WRAP’s Minister of Culture.

Art Hazelwood: I first started working with WRAP after Paul Boden left the Coalition on Homelessness. I’d heard about his new project and knew that anything he was involved with I wanted to be involved with. I had worked only in a very glancing way with Paul at the Coalition but admired his energy and vision and especially his fucking way of speaking. I wrote to him and said, 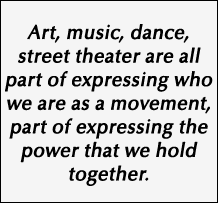 “Do you need any art help?” Right away we started talking about making the graphical data in the Without Housing report into something that would grab people’s attention. And that’s when I started being referred to as the Minister of
Culture.

We used that term as half pompous joke and half homage to Emory Douglas and the Black Panther Party. But the culture ministry is actually a very important part of WRAP. We see art in its broadest meaning as a significant part of getting WRAP’s message out. We don’t see it as window dressing. Art, music, dance, street theater are all part of expressing who we are as a movement, part of expressing the power that we hold together.

I’m primarily in the visual arts, so in addition to contributing my own work, I work to bring in other artists to help out in the technical aspects of visual materials we produce, whether it is software training, layout, or print production. And the two books that I worked on with WRAP, Hobos to Street People and House Keys Not Handcuffs, are examples of bringing together history and visual arts and passionate writing to reach out in different ways.

In a way, WRAP artwork draws from the socially conscious art from the 1930s to the present. We reuse art from the past that reflects our current struggles and we make new art to treat the moment directly. The artists involved range from those who make an occasional piece to those who help out again and again over the years. In recent years, Ronnie Goodman has been a strong visual voice of WRAP. I met Ronnie when I was a visiting artist at San Quentin. He made his first piece for WRAP while he was still inside; since he has been out, he has made powerful pieces about homelessness. Many other artists have contributed to the visual richness that WRAP has created.

The strength of WRAP’s art grows out of the process of creating it. Paul acts as an advocate and filter for the artists. He presents the artwork to WRAP’s membership and brings back feedback. He doesn’t tell the artist someone wants to change this or someone else thinks it should be in blue. He gets consensus and important input and then gives that to the artist. Without that feedback, it would be impossible for the artists to create art that speaks powerfully to WRAP and its allies. It’s fucking annoying as hell sometimes for the artists. They create something and then they are told “this isn’t working” and they go back to the drawing board, cursing the fact that they aren’t just making art in an ivory tower.
But the work comes back stronger and more connected because of this process.

Donate to WRAP today in honor of Art Hazelwood and 10-years of powerful WRAP artwork — your donation will be matched 1:1 up to $10,000! We can’t do all that we do without you -–thank you for making a generous donation today.