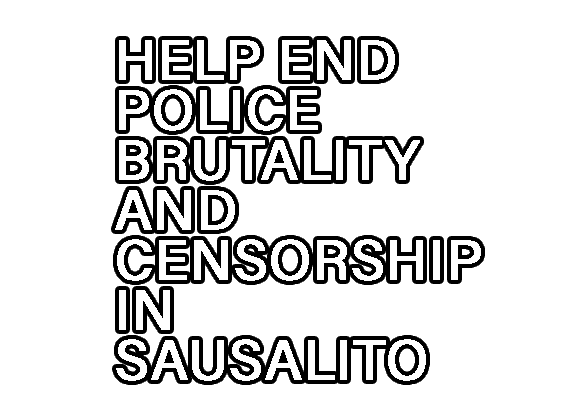 A protest is planned Saturday December 11th, 2pm Protest at Sausalito Police Station to demand that Sausalito Police Sergeant Thomas Georges be immediately removed from his position in Sausalito and barred from serving in any capacity as a sworn law enforcement officer due to his excessive use of force and covering up the assault of civilian Sausalito PD employee against Holly Wild. A petition for his removal has thus far gathered 860 signatures. https://www.change.org/p/sausalito-police-department-mayor-jill-hoffman-and-city-manager-chris-zapata-help-end-police-brutality-and-censorship-in-sausalito

On Tuesday, November 30th Sergeant Georges committed assault and battery against journalist Jeremy Portje. Jeremy Portje was investigating the police squad that attacked him which included Officer Thomas Georges, Nick White, and Sean Smgalski, for their excessive use of for arresting Robbie Powelson and Holly Wild for illegal camping on November 24th for camping outside the bounds of the sewage infected City operated camp at Marinship Park. Robbie Powelson has accused Thomas Georges of violently choking him during that arrest. Jeremy Portje had just this past week filed a public records act request for Georges, White, and Smgalski’s body cam footage for that incident.

Robbie Powelson and Holly Wild have a history with Sergeant Thomas Georges and his subordinates Nick White and Sean Smgalski. When Holly Wild attempted to report the much publicized assault and battery by Sausalito PD employee Mike McKinley against her on September 10th Sergeant Georges led the cover up of the attack. When Sausalito police officers refused to take her report initially after the attack, it was Sergeant Georges and his subordinated Nick White and Sean Smgalski who refused to take her report on September 14th when president of the Marin County Homeless Union Robbie Powelson drove her to the police station to make a report because no officer would come to the encampment to meet Mrs. Wild.

When dispatchers referred Wild and Powelson to White’s supervisor – Thomas Georges – he too refused to take the report. Only after further pushing by attorney by the California Homeless Union, did the Sheriffs department open a criminal investigation on Mike McKinley and the city suspend him. Criminal charges are still pending, thought the city has given no indication that it has begun an internal investigation. https://pacificsun.com/sausalito-police-investigation/

Anthony Prince, general counsel for the homeless union and attorneys for Powelson and Wild, is currently pushing the Marin DA to charge Sergeant Georges and other involved officers with witness intimidation for their excessive use of force on November 24th which would include criminal charges against the officers.