The community of unhoused Oaklanders living at Cob on Wood are anticipating the arrival of bulldozers any day now. Cob on Wood is one of the largest homeless encampments that currently exist in West Oakland, where residents have built their own tiny homes, a community clinic, and even a free commissary. While this beautiful and sustainably built settlement has been heralded in the media as a creative solution to Oakland’s housing crisis, there remains an ever-present threat that Caltrans (the public entity that “owns” the land) will evict everyone living in the encampment and destroy it. 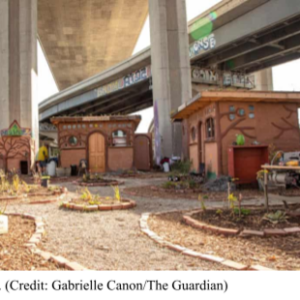 Around the same time that the city issued a “cease and desist” order to the folks at Cob on Wood, Oakland  City Council was considering a proposal to give $350,000 to a non-profit to build a city-sanctioned encampment. This is an alarming trend across the US – while encampments created by unhoused people are vilified and violently dismantled, cities are proposing establishing “sanctioned encampments” as a tier of the formal shelter system. These government-run sanctioned encampments are not progressive or innovative, and they inevitably lead to criminalization outside of their fenced-in borders. Instead, these encampments represent another installation in the long history of warehousing and invisibilizing poor and unhoused people.

Unhoused organizers and allies have been asking for cities to support creative solutions to homelessness for years, and the idea to have legalized encampments certainly isn’t new. 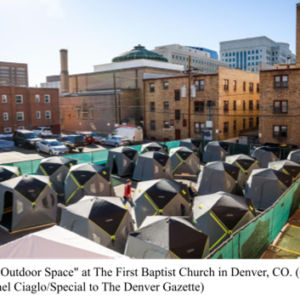 However, it was the COVID-19 pandemic that spurred local governments to create sanctioned encampments as part of the emergency  response  to  the shutdown  of  congregate shelters.  Typically,  tents are lined up next to each other in a fenced off area, which is then patrolled and policed by a local provider and/or private security. While  conditions  inside the encampments vary, the decision to make sanctioned encampments part of the service landscape turns them into leverage for law enforcement; like a shelter bed offer, turning down an offer to stay in an encampment can result in a person being branded as “service-resistant.” On the heels of Martin v. Boise and Judge Carter’s decision regarding LA’s Skid Row, cities are leaning into the narrative of service resistance as a way to continue business as usual without being convicted of cruel and unusual punishment; by making offers of shelter a precondition to the enforcement of anti-homeless laws, they fuel the narrative that homelessness is choiceful, and thereby that criminalization is deserved. This tactic becomes even more insidious in light of the fact that an “offer” of shelter can mean practically anything, and that even the mere pretense of an offer seems enough to circumvent the requirements set forth by the 9th circuit.

Local leaders have been very straightforward about this strategy. In Sacramento, mayor Darrell Steinberg specifically cited the Carter decision as a precedent for establishing a “Right to Shelter, Obligation to Accept,” which would make it illegal for unhoused people to refuse offers of shelter. In regard to sanctioned encampments, he said, “I strongly support our new safe ground movement to organize designated tent and tiny home encampments. It is our best short-term strategy to triage the thousands living in the numerous tent encampments and then regulate the places in our city where it is not appropriate to camp” (emphasis added). Clearly, one of the most appealing aspects of these encampments for local governments is that they give cities more capacity to make offers by cheaply and quickly increasing their “shelter stock.” The greater the number of offers, the easier it becomes for cities to continue the brutal and blatantly unconstitutional displacement of unhoused people. 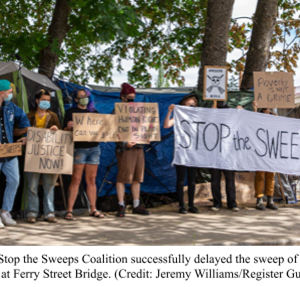 Communities created by unhoused people can be places for revolutionary dreaming, rad mutual aid projects, and sites to mobilize political resistance to the criminalization of extreme poverty. Government-run encampments take away what can be empowering about living in an encampment by turning the encampment into a “service.” The institutionalization of encampments reinforces the carceral logic that unhoused people and poor people can only legally exist within a system that is designed to reform them, even if the only difference between being in the system and on the streets is whether it’s your tent or a tent issued by the city. Institutionalization also completely alienates the sense of community that characterizes most encampments on the streets; since the advent of contemporary homelessness in the early 80’s, people have banded together in community with friends and allies to protect themselves, their belongings, and each other. It is a natural form of survival and togetherness in lives that are way too often dangerous and incredibly isolated. 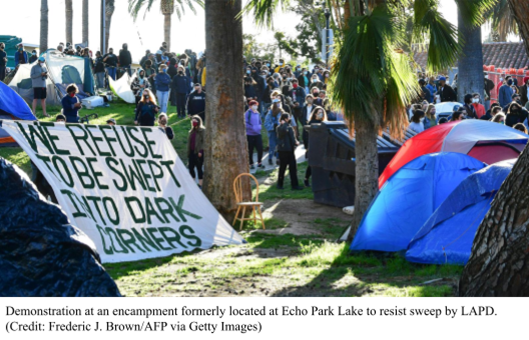 Governments have the choice to stop the brutal evictions and destruction of encampments created by unhoused people. Rather than co-opt and criminalize, cities could work to support people living in encampments by providing sanitation, water, healthcare, and survival gear. The continued refusal to honor the ingenuity and creativity of folks who must survive on the streets reveals that the agenda behind “sanctioned encampments,” like many other services created to “help the homeless,” is to corral poor people and conceal them from the public. Thirty-nine years of failed policy should speak for itself – criminalization is cruel and dehumanizing, nothing ends homelessness but a home!