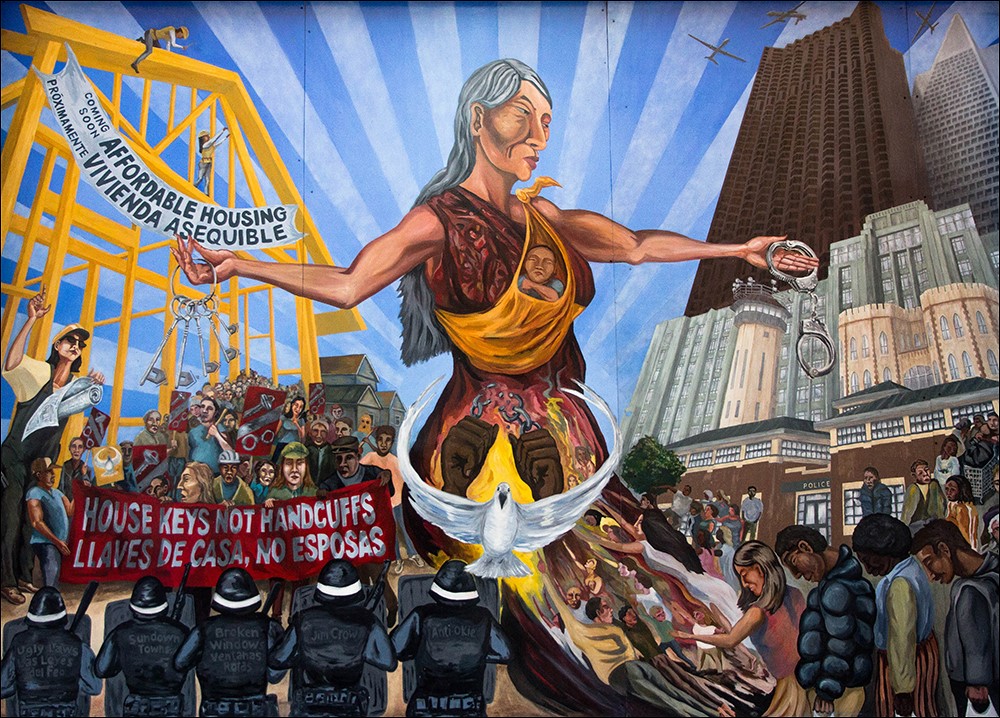 Affordable Housing/Vivienda Asequible (2016) by the SF Print Collective working with the Western Regional Advocacy Project (WRAP) represents people working together against the structures of oppression to become a powerful force of nurturance, peace, and justice. The mural speaks to WRAP’s critical work to expose and eliminate the root causes of homelessness and poverty, empower communities to demand protection of civil and human rights, and advocate for restoring federal funding for affordable housing. 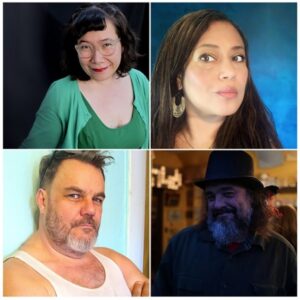 Celeste Chan is a writer and filmmaker, schooled by Do-It-Yourself culture and immigrant parents from Malaysia and the Bronx. She launched her creative work in San Francisco in 2004. She founded and directed Queer Rebels (a queer and trans people of color arts project), created and curated experimental films, joined Foglifter Literary Journal as an editor and board member, and toured with legendary feminist road show, Sister Spit. Her writing can be found in Ada, AWAY, Citron Review, cream city review’s genrequeer folio, Feminist Wire, Gertrude, Hyphen blog, The Rumpus, and elsewhere.

MK Chavez is the award-winning author of Mothermorphosis and Dear Animal,. Chavez is co-curator of the reading series Lyrics & Dirges, co-director of the Berkeley Poetry Festival, and poetry editor at Rivet Literary Journal. She is the recipient of the PEN Oakland Josephine Miles Award of an Alameda County Arts Leadership Award. Her most recent publications can be found in bags of coffee from Nomadic Coffee and on the Academy of American Poets Poem-A-Day series.

Paul Corman-Roberts’ 2nd full length collection of Bone Moon Palace will be released by Nomadic Press in the Fall of 2020. Previous collections include his full length debut The Abomunauts Are Coming To Piss On Your Lawn (Howling Dog Press, 2006) and the chapbook collections NeoCom(muter) (Tainted Coffee Press, 2009) 19th Street Station (Full of Crow Chap Series, 2011), Notes From An Orgy (Paper Press, 2014) and We Shoot Typewriters (Nomadic Press, 2015.) His poem “Sausalito” won the Out of Our Magazine poetry contest in 2010 and his short story “The Deathbed Confession of Christopher Walken” placed 2nd in subTerrain Magazine’s national fiction contest in Canada. A three-time Pushcart and Best of Web nominee, he currently teaches workshops for the Older Writer’s Lab in conjunction with the San Francisco Public Library as well as the San Francisco Creative Writing Institute. He sometimes fills in as drummer for the U.S. Ghostal Service.

Tim Xonnelly was an LA poet in the late 1980s; co-facilitator of the Beyond Baroque Poetry Workshop, curator of the poetry series at Angel’s Gate Cultural Center in San Pedro, frequently published in Shattersheet and The Moment. Since 1991 he’s lived and worked in Downtown Berkeley. He taught disabled adults in a community-based program through ARC. Since 2000, he’s worked as a para-educator in the Berkeley Unified School District, specializing with students severely affected by autism. He served as the president of the Classified Union 2006-2008. His chapbooks include Velcro Heart (1989), A Season in Bed (1998), and I skip the long ones too (2004). His poems are featured in the anthologies Cross-Strokes: Poetry Between Los Angeles and San Francisco (2015) and 1001 Nights: Twenty Years of Redondo Poets at Coffee Cartel (2018). Recent poetry publications include The Racket Quarantine Journal, Berkeley Times, The Oakland Review, Sparkle & Blink, and the Naked Bulb. 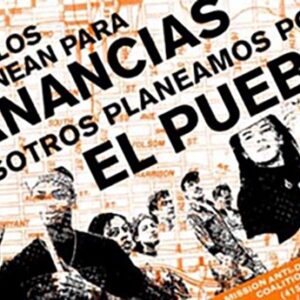 The San Francisco Print Collective is a printmaking collective that makes graphic art to support social justice movements. SFPC uses posters, murals, banners, and billboards to amplify the voice of community organizations and to reclaim public space from corporate advertising. 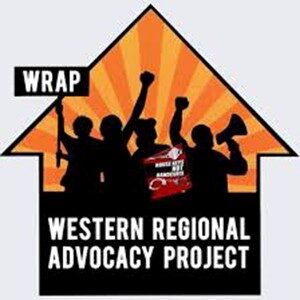 The Western Regional Advocacy Project was founded in 2005 by local social justice organizations across the West Coast to expose and eliminate the root causes of homelessness and poverty, empower communities to demand protection of civil and human rights, and advocate for restoring federal funding for affordable housing. By empowering homeless people and communities, WRAP strives to balance the debate by putting forth a vital alternative perspective, pushing for smarter, representative, and accountable public policy that protects those most in need rather than punishing them for their circumstances. Through their research, community organizing, and policy advocacy, WRAP aims to translate the outrage at sleeping bodies in public into a catalyst for change in attitudes and practices rather than something to quickly hide away from sight, disregarding human dignity and rights for appearances’ sake.

Forces, Arab Resource Organizing Center (AROC), and Arab Youth Organizing (AYO).
The project was originally conceived to culminate in four quarterly public events to be presented on Clarion Alley. However, due to the pandemic the poets are instead being filmed by videographer Mahima Kotian reading their work in front of the murals on Clarion Alley. Kotian is creating videos for each series that are being presented as part of live online events. All the events are free and open to the public.

The poets are creating new poems in response to the murals, and will be reading those and other selected works at the events.

Wall + Response is also creating an edition of 50 print portfolios featuring posters
of the murals and the poems, printed by Sun Night Editions, with handmade
portfolio boxes designed and made by book designer/printmaker Asa Nakata.
Wall + Response is made possible by the generous support of the San Francisco Art Commission and the Zellerbach Family Foundation.

You can read more about CAMP and Wall + Response here. 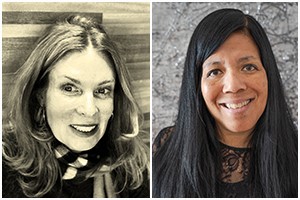 Megan Wilson is a visual artist, writer, and activist based in San Francisco. Wilson has been an artist and core organizer with Clarion Alley Mural Project (CAMP) since 2001. In 2018 she co-directed and co-organized (with Christopher Statton and Nano Warsono) CAMP’s second international exchange and residency project, Bangkit /Arise between artists from Yogyakarta, Indonesia and San Francisco/Bay Area in collaboration with the Asian Art Museum of San Francisco. The second phase of the project will take place 2021-22. meganwilson.com

Maw Shein Win is a poet, editor, and educator who lives and teaches in the Bay Area. Her poetry chapbooks are Ruins of a glittering palace (SPA/Commonwealth Projects) and Score and Bone (Nomadic Press). Invisible Gifts: Poems was published by Manic D Press in 2018. She was a 2019 Visiting Scholar in the Department of English at UC Berkeley. Win is the first poet laureate of El Cerrito, California (2016 – 2018). Her full-length poetry collection is Storage Unit for the Spirit House (Omnidawn, 2020), longlisted for the 2021 PEN America Open Book Award. She often collaborates with visual artists, musicians, and other writers and is a Spring 2021 ARC Poetry Fellow at UC Berkeley. mawsheinwin.com 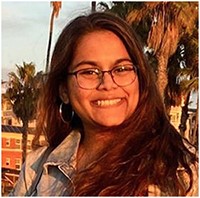 Mahima Kotian is a freelance photographer and videographer. Originally from Mumbai (India), she moved to San Francisco to pursue a Master’s degree in Communications. She loves all things art, from painting to reading to filming. Mahima aspires to be a videographer and video editor, and narrate great stories through her content. 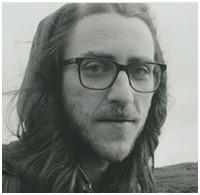 Evan Karp is the creator and executive director of Quiet Lightning, recognized by the Yerba Buena Center for the Arts as one of the 100 “people, organizations, and movements who are shaping the future of culture”, and the founding editor of Litseen, recognized by the New York Times as a go-to, near-comprehensive source for Bay Area literary events. He’s written columns for the San Francisco Chronicle, KQED, SF Weekly, SF/Arts and The Rumpus, and his nonfiction and poetry have appeared in Guardian UK, BOMBlog, Eleven Eleven, Omniverse, Vertebrae, and a fading constellation of other places. With his brother Miles, he combines music, words, and other sounds as Turk & Divis; with Maw Shein Win, as Vata & the Vine. Evan is the events manager for Booksmith, The Bindery, and Berkeley Arts & Letters.