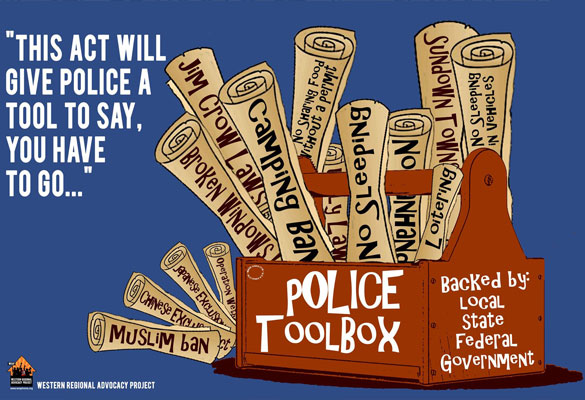 Despite Oregon legislature’s emphasis on “police accountability” this session, the Judiciary Committee refused to address discriminatory policing in public space. The day before it was scheduled to be heard, Chair Janelle Bynum pulled the Right to Rest Act (HB 2367) from the agenda, along with over 80 written testimonies that had been submitted for it. HB 2367 states that people have the right to exist in public space and participate in social and economic life without facing constant threats from discriminatory policing.

The Right To Rest Act has historically been framed in terms of the ways that time, place and manner laws are abused by law enforcement to sweep our unhoused neighbors out of public space. However, the Oregon Legislature has overlooked how the bill addresses a much larger concern about how blatant human rights violations are legally sanctioned. Unhoused people are not the only people who are targeted for police contact solely for being in public space, as shown by the myriad of stories in which the police are called on people for #WalkingWhileBlack. Kids of color, buskers, migrant laborers, the Disabled community and the Trans community are also constantly targeted for harassment. As long as laws exist that can arbitrarily criminalize anyone, our legal system will continue to reinforce the oppression of and brutality against non-white, poor citizens, whom police have historically been able to kill and maim with impunity.

This is not the first time that the Right To Rest Act has been shot down by legislators or by wealthy adversaries, like the League of Cities. Instead of moving to put an end to the laws that enable criminalization, these groups back bills that simply specify how criminalization ought to take place. A prime example is HB 3115, which only slightly addresses this by asking that time, place, and manner restrictions be made reasonable by local municipalities. While those who determine what is “reasonable” will continue the status quo—merciless and brutal anti-camping ordinances when people have nowhere else to go— those who would challenge these ordinances are often without legal representation. The glaring contradiction in this bill is that criminalization can never be reasonable or just, and HB 3115 risks being a de facto authorization of very laws it is intended to amend.

In many ways, the silencing of the Right To Rest Act represents the political showmanship that has become common in the liberal political agenda—while “progressive” legislators and policymakers champion “incremental change,” there exists a deep-rooted fear of truly radical change as is contained in HB 2367. We will not be liberated by “nicer” policing or “reasonable” criminalization! And what of those who don’t survive until the “slow change” is implemented? People are dying on the streets right now, people are being murdered by police today, and in failing to allow even a public dialogue about the Right to Rest, let alone actually passing the legislation, the Oregon legislature denies the immediacy of the reality on our streets.

In the meantime, WRAP and our allies will continue to lobby for this legislation to be heard and fight for the right for all people to exist in public space.