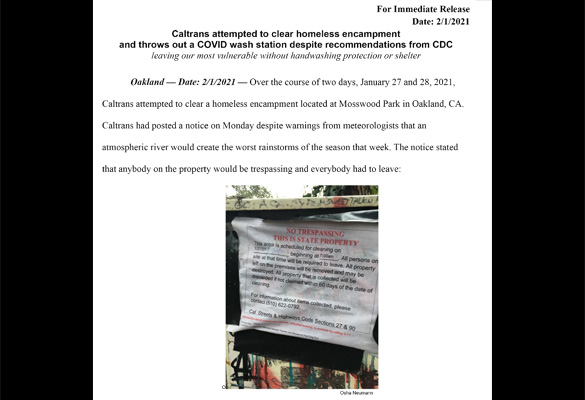 Caltrans had posted a notice on Monday despite warnings from meteorologists that an atmospheric river would create the worst rainstorms of the season that week. The notice stated that anybody on the property would be trespassing and everybody had to leave:

CDC guidelines recommend that “If individual housing options are not available, allow people who are living unsheltered . . . to remain where they are.” Removing people from places where they may be sheltering “increases the potential for infectious disease spread.”

Community eviction defenders, prevented Caltrans from dismantling a structure housing a group of homeless people in an encampment on a strip of Caltrans right of way between Mosswood Park in Oakland and the freeway. This is the structure Caltrans was preparing to destroy:

Eviction defenders arrived in sufficient numbers to convince the CHP and Caltrans apparently decided not to provoke a confrontation:

Andrea Henson, Litigation Attorney at the Eviction Defense Center and Former Lead Organizer for “Where do we go Berkeley” who was present and observed the protest commented:

“For Caltrans to evict an encampment and threaten to tear down shelters in the middle of the torrential rainstorm is inhumane, insensitive and the eviction was particularly deplorable given that people had not been offered alternative shelter.

We are in the middle of the pandemic and I literally saw Caltrans workers to throw away a COVID wash station, that we assume was provided by the City of Oakland, in a trash pile. When you live without running water or electricity that wash station may be your only protection against COVID”:

The CDC advises that the unsheltered have access to sanitation and to handwashing facilities are provided to encampments to assist in the prevention of COVID.

Osha Neumann, a member of Where Do We Go Berkeley? Advisory board and an attorney who has sued Caltrans in the past was also present and observed the actions of the Caltrans crew and the police. He commented:

“Protecting the most vulnerable in the City of Oakland and the Bay Area means providing them with COVID protections, warmth, shelter, food and assistance not tearing down the structures that protect them from the rain and throwing away the little COVID protection they have.”