For Immediate Release
Press Contact: Muteado Silencio (510) 435-7500
What: All the homeless and formerly homeless creators of this statement will be at City Hall Today at 5pm reading this statement |
deeandtiny@gmail.com

No Encampment Bans Until Houseless Oakland Residents Are Granted Land

“I have already been cited and arrested for setting up a tent to close to a school, the Encampment management policy is a lie, it is not new , its just adding another law to make our lives worse without giving us shelter, ” said Broken Cloud, a houseless Afro-Indigenous Oakland resident, who has lived here is whole life, “no-one owns mama earth, they can’t ban us from our mama”. he concluded.

After years of criminalizing laws instituted across the Bay Area and the US, Oakland’s Encampment Management Policy takes the existent hundreds of anti-homeless laws and codfies them into homeless removal policies. It is why all of the houseless and formerly houseless, Black, Brown, indigenous and disabled youth, families and elders that comprise the liberated villages of Homefulness, POOR Magazine and Deecolonize Academy  hereby demand that is this policy is allowed to go into effect an immediate release of hundreds of acres of hoarded and stolen land in the City of Oakland be granted to homeless Oakland residents, majority of whom are long-time Oakland residents who lost their homes through gentrification, poltrickster, colonial policies, eviction, speculation, police predation, harassment and ongoing attacks on poor Black, Brown, Disabled and Indigenous Oaklanders. We are demanding these immediate land grants so houseless peoples can build their own self-determined solutions to homelessness like Wood Street Collective, Homefulness and the Self-Help Hunger Program 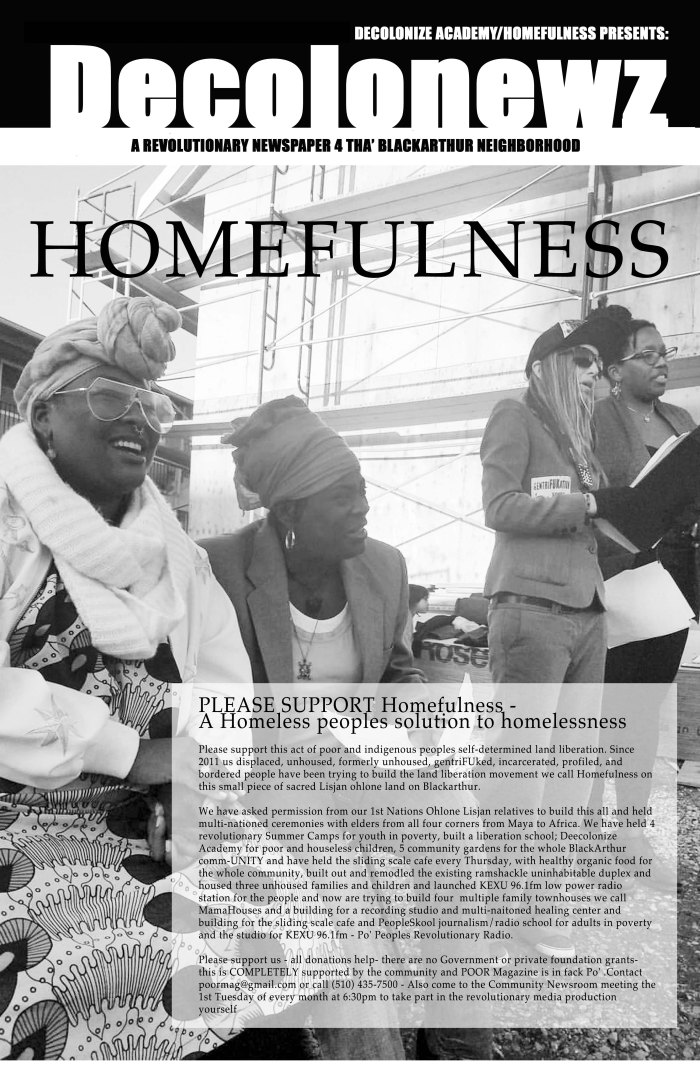 “What about Wealth-hoarder Bans?- Where are the laws in Oakland that criminalize people for having more homes than they can inhabit and more money than they can ever use,  this is the violence of krapitalism at its most deadly ” said Tiny Gray-Garcia, formerly houseless co-founder of Homefulness and POOR Magazine

“Ban capitalism!!! How the fuck they think encampments started. My people lived in “encampments “ before colonization, they were called villages! Homelessness was not a concept in our territories 200 yrs ago and they call this progress?! If they’re going to outlaw them then house everyone!”, said Corrina Gould, Lisjan/Ohlone land liberator, co-founder of Sogorea Te Land Trust and co-founder of Homefulness

“With Oaklands new Encampment Management Policy, we are going to see the same things happen as they have in the history of the Bay Area, continuing the forceful removal of people who have nowhere else to go and are just trying to survive…” said 17 year old, formerly houseless youth resident of Homefulness and student at Deecolonize Academy

“These encampments weren’t here before because people had their homes, but now we have all been gentrified and the city is trying to get rid off all homeless people, that not the solution they should get homeless people homes so folks can get some rest also for the children and elders shoudn;t be on the streets. ” sais Amir Cornish, 17 year old formerly houseless student at Deecolonzie Academy.

This new policy is the redlining of homeless people and will put people in danger of more arrests and criminalization. These policies have always been around it’s just this time we have a name to call it and certainly nothing under the sun , said Kimo Umu, 17 year old formerly houseless student of Deecolonzie Academy

“This new policy is another attack to people already in struggle. Policies and Laws clearly aren’t made to help they just solidify the power that the colonizers already have. One has to create their own solutions like we have manifested at Homefulness,” said Akil Carrillo, 17, youth poverty skola at Deecolonize Academy

Story on this issue: