WHOSE PARK? OUR PARK! SAVE DRIVER’S PLAZA!
Speak Out and Day of Healing From The Trauma at Driver’s Plaza
11:30 am 61st @ Adeline/Stanford/Genoa

OAKLAND CA, July 9, 2020 – Where North Oakland, West Oakland and Berkeley meet, there is a little sliver of land known as Driver’s Plaza. For years this piece of land has been a hang out spot for older African American working class and low income residents – both housed and unhoused.

“They’re newcomers who don’t know they moved in a Black community. They don’t know that this community has been experiencing relentless threats to existence. This is Oakland. This is the Black community,” said Auntie Francis who runs the Self Help Hunger Program “Supporters! Please come through once again to fight racist displacement. Spread this message: Whose Plaza? Our Plaza! Hands Off Drivers Plaza!”

As long-time Black residents have been displaced from their family homes, many have relocated to living on the streets. Driver’s Plaza has been a place where many have parked their vehicles. Driver’s Plaza has also been a place where many formerly housed residents of this neighborhood have come to continue to congregate and hold on to what is left of their community.

Over the years, community based grassroots organizations have stepped up to support this resilient community. Aunty Frances Moore, a member of the Black Panther Party for Self Defense, initiated this culture of mutual aid with a foundational program of food distribution for the hungry and food insecure, both housed and unhoused.

Several events have been held to maintain and beautify the Drive Plaza. These have been squashed, tokenly supported or demolished by the City of Oakland and Oakland Police Department. Here’s an example of the contention between the Black community and District One city councilman, Dan Kalb:

2015: Aunty Frances put portapotty at Driver’s Plaza. Portapotty removed by the City of Oakland after complaints from racist newcomers
2016: Phat Beets constructs a cob oven at Driver’s Plaza which was destroyed by the City of Oakland.
2016 to present day: SHHP distributes hot meals, produce and clean drinking water to unhoused.
May 2020: Portapotty delivered via community donations from The Village in Oakland. Hand sanitizers, masks, produce and meals distributed. SHHP joins efforts to house seniors and mothers with children into transitional and permanent placement conjunction with Omuwale of Manna from Heaven. Landowners lobby city and harass Honey Bucket.
June 2020: Landowners lie and complain that portapotty is sitting on the bike lane.
City proposes to move port apottie to Manila street- 2 miles away.
July 2020: Councilman Dan Kalb and the City of Oakland Administration claims no unhoused people exist at Driver’s Plaza and plans to remove portapotty this coming week. Honey Bucket stands with community and will not remove their receptacle until The Village instructs them to do so.

For more details on the sequence of events, check out the SHHP FACEBOOK PAGE .

“The City is literally denying the existence of some of their most vulnerable citizens,” said Max Cadji from Phat Beets Produce and North Oakland Restorative Justice Council. “This isn’t just about a portapotty. This about acknowledging and treating humans in need and with nowhere to go with dignity, respect and safety. This is about standing up to racist and classist newcomers who have no regard for our Black elders and families who have used that plaza for decades.”

EMAIL TODAY!! Tell these City of Oakland employees to stop the attacks on and displacement of unhoused Black residents. Black Lives Matter! 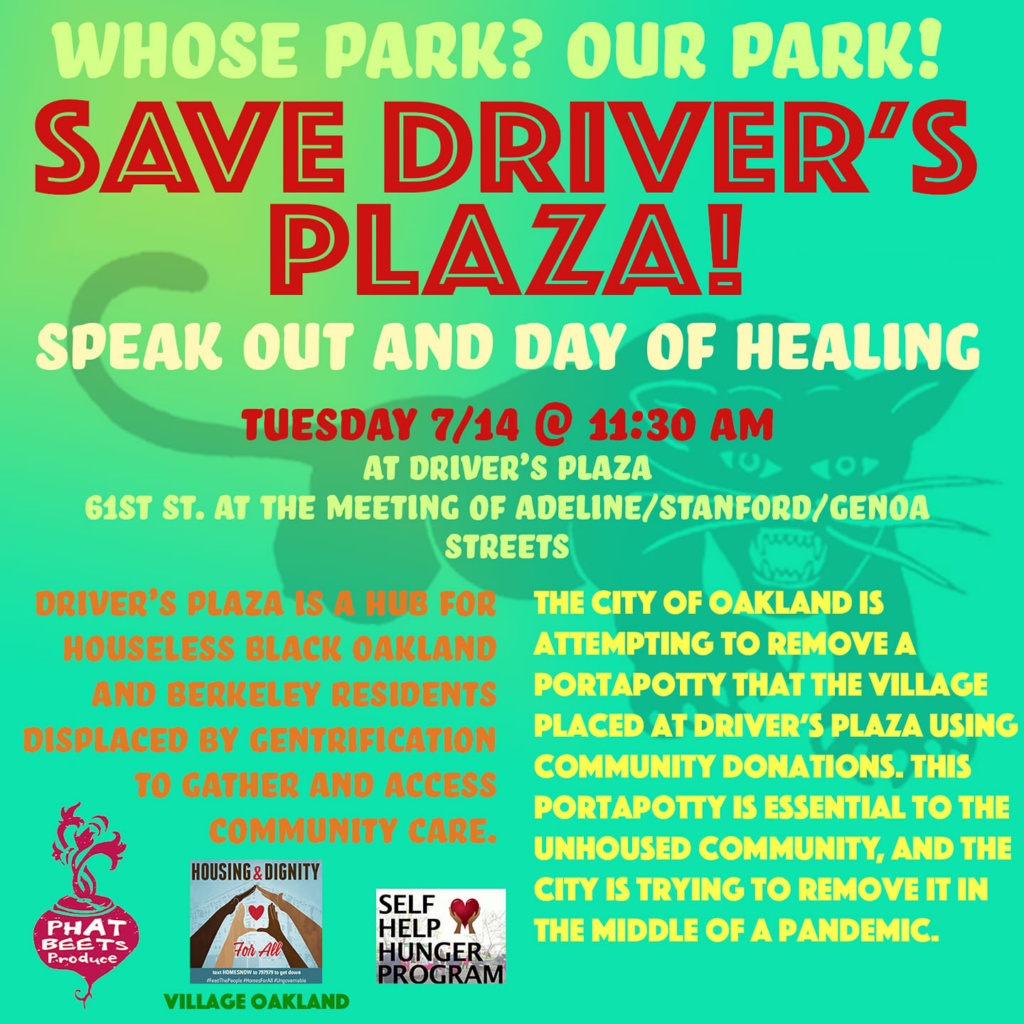