Today, Thursday June 18th 2020, a mass community of support showed up again to stand against the potential of a mass sweep of houseless people to nowhere. (Watch livestream here) This time, the city agencies and police were too scared to even show up. Tammy Vigil, a spokesperson for Denver’s Department of Public Health & Environment, stated, “Due to interference from people at the site, crews will wait to complete the initial cleaning until it is safe to continue.” The “interference” she is referring to is the hundreds of people who called the city out with chants and signs for sweeping people to nowhere with no housing or solution. It also very interesting that the city says they will not continue the sweep until they feel “safe” from protestors calling them out of injustice, while at the same time this particular sweep was called for by DDPHE as a supposed “immediate safety concern.” So much for the immediate safety concern…With the sweep delayed who knows how much longer it becomes ever more clear that this sweep was not actually about an immediate safety issue. Rather this sweep is about getting homelessness out of sight, or at least out of a neighborhood where real estate investor’s are crawling. 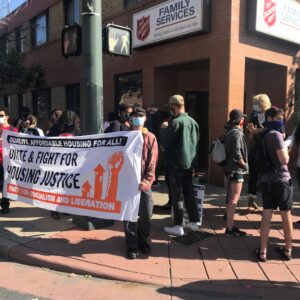 As of today, the residents of these encampments still are able to continue living on these public blocks in their community, surviving the best they can. Thanks to all those who showed up yesterday and today to stand against the sweeps. The people’s cry has been heard: We will not disappear!!!

Stay tuned to our e-blasts and facebook page for notice of this still pending sweep. Be ready to show up again and let the city and police know just like homelessness will not disappear with sweeps, we the people will not disappear from stopping these unjust sweeps!!