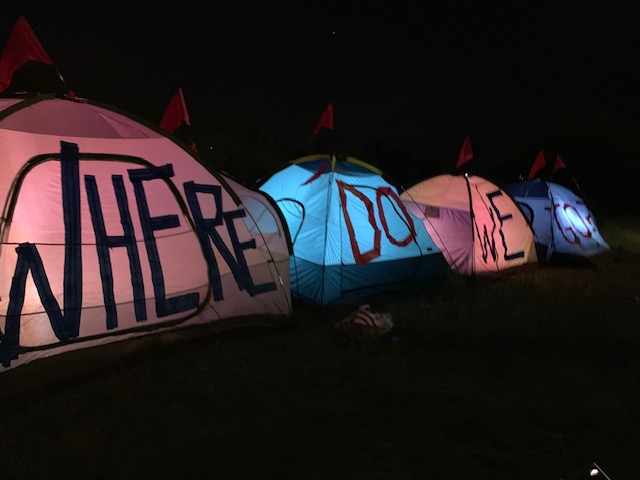 Where Do We Go?
Berkeley California
A movement is growing in Berkeley, where unhoused people are demanding answers.
By Alastair Boone
Alastair Boone is the Editor in Chief of Street Spirit.

On September 19, two elderly and disabled women refused to leave their tents as California Highway Patrol officers threatened them with arrest. The women-named Mama Bear and KC-are in their sixties. Both are in wheelchairs. Both have tried repeatedly and unsuccessfully to get housing. And they weren’t alone-a third woman, Piper, remained in her tent, grieving the recent death of her boyfriend, Fixie.

The women were exhausted. For weeks prior, they had been bounced around the same intersection countless times. From their tents, they can look out and see land owned by two government agencies: an alley owned by the City of Berkeley on one side and a large parcel of dirt owned by CalTrans on the other. And since the beginning of September, residents report that evictions have ramped up. One week, CalTrans comes and evicts them from the dirt parcel, forcing them to pack up and walk across the road to the alleyway.

The next week, the City of Berkeley comes to evict them from the alley, so they move back across the road to the dirt parcel. Mama Bear had moved six times when she decided to refuse. KC had moved seven times over a three-week period. Piper simply refused to leave her tent.

The three women were not arrested, and as of this writing, their tents remain in the same place. But their act of resistance is part of a growing movement that began on September 4, when the encampment underneath the University Avenue overpass was targeted by what advocates are calling a coordinated eviction effort between the Berkeley Police, CalTrans, and the California Highway Patrol. 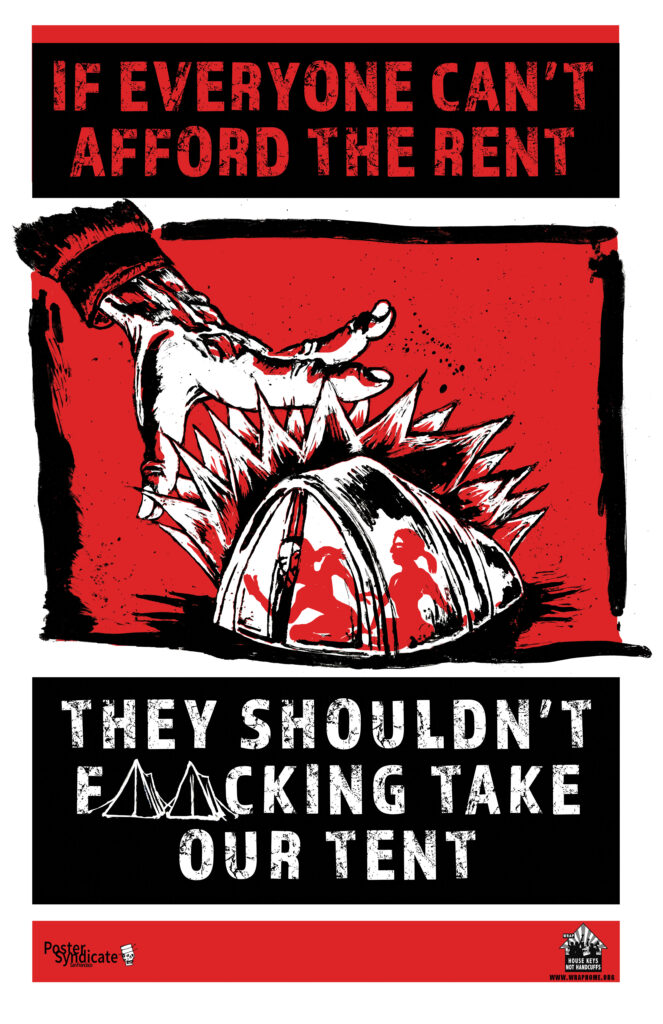 “When CalTrans told encampment residents that they had to move off of their property, BPD was there to tell them they couldn’t move onto the sidewalk, because of the new [Shared Sidewalk Ordinance],” said Andrea Henson, a lead advocate and organizer for the movement who witnessed the eviction. (City officials deny that there was a coordinated effort.)

The next day, a similar eviction took place at an encampment above the University Avenue overpass, across the road from Seabreeze Market. So on the evening of September 5, residents of the two encampments made signs and attended a Berkeley City Council meeting to demand answers. Tired of moving from corner to corner, encampment residents demanded, “Where do we go?” These encampments were home to Jupiter and Fixie-two Berkeley citizens who were struck and killed by an Amtrak train on September 11. Each of them had moved several times leading up to the night of their deaths. This further rattled the community in the two encampments, and strengthened their desire to form a movement.

In recent weeks, this group of 40+ individuals have taken their message to the streets. On September 22, they marched to a West Berkeley town hall meeting hosted by Councilwoman Rashi Kesarwani. During their march, residents of the University Avenue encampments sang protest chants and danced in the streets, holding signs.

LaTonya West put her keyboard in a shopping cart and played jazzy renditions of traditional protest songs and original music as she marched. Drivers honked and cheered in support as they passed. When the group arrived at the town hall, they joined the democratic discussion. They held up pictures of Jupiter and Fixie.

They spoke about their personal experiences. Housed and unhoused residents agreed on the need for porta potties, trash pick-up, and better solutions.

“This movement is different because it’s the residents of the encampments, not the activists, that are setting the agenda,” said Andrea Henson, a lead advocate and organizer in the movement.

“The unhoused are organizing and taking a stand, refusing to move. They are marching and engaging in the conversation. They are fighting back against the predatory evictions and unlawful destruction of their property.

They are demanding an answer.”

For more information on #WhereDoWeGoBerk: