The president threats are becoming a reality, the new head of the USICH Robert Marbut  (News Article Link: How A Traveling Consultant Helps America Hide The Homeless). “We don’t use the term shelter,” Marbut says. “We use the term transformational campus.” Marbut does not believe in Housing First but instead believes all homeless individuals have to be “fixed” before they deserve housing. The “Velvet Hammer, approach” Marbut offers the same basic advice to most cities: Cut the goodies and build a shelter like jails facilities.

Read more on Robert Marbut and what he could do to create national disaster below and attached.
Robert Marbut Memo 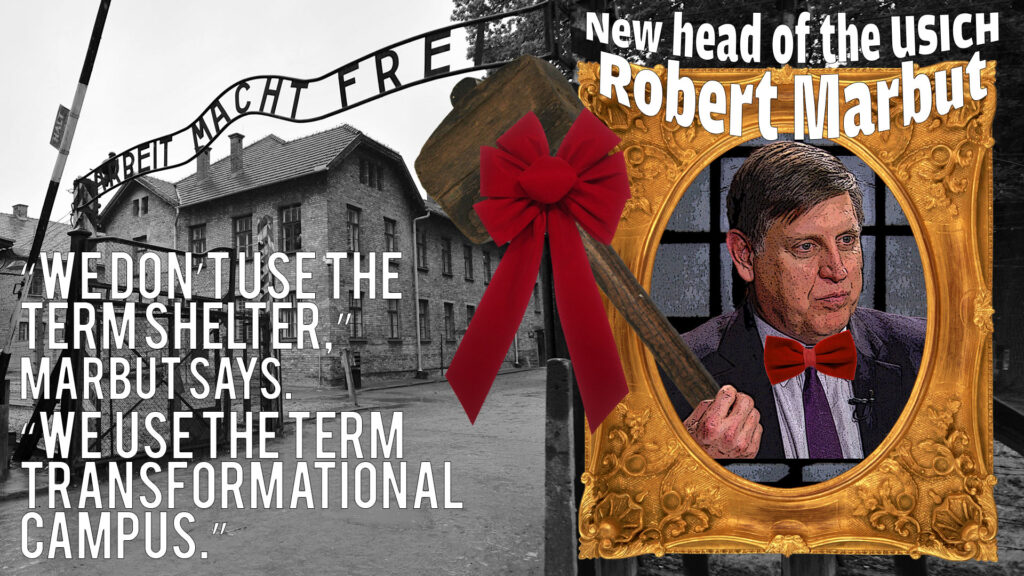 Pending final approval at a U.S. Interagency Council on Homelessness meeting on December 10, Robert Marbut has been appointed Executive Director of the USICH.[1] Before receiving this appointment, Marbut worked as a Texas-based consultant advising cities on how to decrease the size of their homeless communities. Marbut rejects the widely accepted and proven method of housing first, telling Huffpost “I believe in Housing Fourth.”[2] Instead, Marbut follows a set of methods he developed himself, called “The Seven Guiding Principles of Transformation.” Marbut’s approach can be understood by looking at these principles and how he has applied them across the country.

The first two principles, “Move to a Culture of Transformation” and “Co-location and Virtual E-integration of as Many Services as Possible” require houseless people to live in close proximity under heavy supervision. He regularly pushes for large shelters, instead of permanent housing. This is in-line with failed approaches from the 1980s. His first major project, Haven for Hope, opened in 2010 with an annual budget of $15,000,000 and room for 1,500 people. Five hundred of those people are required to sleep in an outside courtyard.[3] Haven for Hope also has 550 closed-circuit television cameras and a staff of 40 security-guards.[4]

Principles four and five are “Reward Positive Behavior” and “Consequences for Negative Behavior,” which Diane Yentel, president of the National Low-Income Housing Coalition, accurately described as “paternalistic, patronizing, filled with poverty blaming/shaming.”[5] These principles fail to account for the structural issues that created the contemporary homeless crisis and instead fixate on blaming poor people for homelessness. The Pinellas Safe Harbor in Florida, which Marbut also helped to design, shows what those principles look like in practice.  The shelter is operated by the County Sheriff’s office out of an old jail, and houseless people are required to sleep on the floor before “earning” a bed with good behaviour.[6] The Pinellas Safe Harbor was described in a 2014 report to the United Nations Committee Against Torture as a “cruel, inhuman, and degrading” choice for homeless people there.[7]

In order to make people actually use these shelter-jails, Marbut advised cities to make living on the streets as difficult as possible for houseless people. His sixth and seventh principles are “External Activities Must be Redirected or Stopped” and “Panhandling Enables the Homeless and Must Be Stopped.” Early criticism of Marbut came in 2014, after the city of Ft. Lauderdale, Florida arrested 90-year-old Arnold Abbott and Food Not Bombs volunteers for sharing food outside the downtown library. Said Marbut, “If you give food on the street, you end up preventing people from going into 24/7 programming.”[8]

Sheriff’s department data from the Pinellas shelter indicated that just 7% of those leaving the facility found permanent housing.[9] Marbut employs methods that have been proven not only ineffective but harmful to the very people he is now being tasked with helping.