“This cause is a great cause and we’re tired of being treated like dirt. We’re not; we’re human beings. We bleed just like you and we’re good people. We need a safe place and this is a safe place right here.”
– Deseire Quintero (1964 – 2019)

The Death of Deseire Quintero and the Creation of “Camp Phoenix”

The California Homeless Union is deeply saddened and angered by the completely unavoidable death on October 27, 2019 of Deseire Quintero, 55, a former fire fighter and a founding member and officer of the Santa Cruz Homeless Union who was pushed into the woods and died after the City closed Ross Camp.
To all those who knew and loved “Mama Desi” we offer our deepest condolence.
Union legal counsel has been retained by Deseire’s son, Marcos Quintero, in order to prepare and file a wrongful death lawsuit and pursue all available legal claims against the City of Santa Cruz, City Manager Martin Bernal, Chief of Police Andrew Mills, “Take Back Santa Cruz” and other individuals and entities known and unknown whose actions and omissions led to this needless tragedy.

On the day she died, Deseire was checking on the well-being of other homeless in Pogonip Park as the Diablo winds intensified during the early morning hours of October 27, 2019. She was crushed when a tree collapsed on her and other homeless campers. Thus, in a very real sense, our strong, beloved sister and leader became the first of our Union officers killed in the line of duty.
We, the officers and members of the Santa Cruz Homeless Union and the California Homeless Union Statewide Organizing Council, hold the City of Santa Cruz, its City Council majority and the offices of the City Manager and the Chief of Police fully responsible for the tragic death of Deseire Quintero, founder of the Ross Camp Council who became an officer of the Santa Cruz Chapter of the California Homeless Union. Responsibility must also extend to “Take Back Santa Cruz” and other anti-homeless hate groups for creating a climate of hysteria and fear of the homeless including allowing direct solicitations for murder and arson against homeless persons to appear on their website.

Deseire was the lead named plaintiff in the case of Quintero v. City of Santa Cruz, the federal lawsuit that she inspired, filed on behalf of hundreds of homeless residents of the original Ross Camp. When the Court refused to intervene and halt the destruction of the Camp and the City failed to provide safe, actually available, alternative shelter, Deseire was forced into the Pogonip along with dozens of others. Aware that the homeless faced risk as the Diablo winds intensified, the City compounded its negligence by failing to warn or otherwise protect those it knowingly pushed into this known danger.

The City of Santa Cruz was also aware that Deseire — and other Ross Camp homeless suffered from post-traumatic stress and, for that reason, was unable to go to any of the facilities that the City falsely claimed were available to those ejected from Ross Camp. Moreover, on the day that Ross Camp was closed, Assistant City Manager Susie O’Hara was witnessed refusing Deseire’s request for a two-day hotel voucher. From there, Deseire went to the Pogunip—and to her death.

Like dozens of other homeless women, Deseire found safety in the Ross Camp community, a fact repeatedly emphasized by witness after witness in a two-day federal court hearing before District Court Judge Edward Davila. Like so many others, Deseire feared and bravely resisted the City’s ill-conceived, fraudulent and ultimately perjurious campaign to misrepresent the conditions in Ross Camp. Unfortunately, Judge Davila accepted the false assurances by Assistant City Manager Susie O’Hara regarding alternative shelter and denied the homeless plaintiffs’ request for a preliminary injunction.

In the weeks leading up to the destruction of Ross Camp, the City and its Police Chief undertook a concerted campaign of intimidation, fear mongering and hostility directed against the homeless, generally, and to the residents of Ross Camp in particular. At the same time, the City, through its agencies, including the Fire Department and City Manager’s office, made a number of representations and commitments to the Ross Camp Council to the effect that whatever problems may have existed in the camp could be and would be remedied without the necessity of dismantling the camp altogether. Reasonably relying on these representations only to be betrayed, the Ross Camp residents were essentially the victims of a deliberate fraud perpetrated by the Defendant City of Santa Cruz.

During the federal court hearing, Ross Camp residents argued that under the “state-created danger” doctrine, the City of Santa Cruz would be liable for increasing the risk of harm to those evicted from the relative safety of Ross Camp and denied accessible, and safe alternative indoor shelter as required by law. The Union is in the process of acquiring –and intends to make public– the full transcript of the federal court hearing as well as the state court hearing on the City’s ex parte application for a nuisance abatement. These transcripts will enable the public to see how the City misled both courts and how credible witnesses provided compelling evidence that Ross Camp residents faced imminent, irreparable harm in the absence of a preliminary injunction. Tragically, but not unpredictably, that risk became a fatal reality for Deseire Quintero, who, absent the City’s actions, would have been in the company of the Ross Camp community instead of crushed beneath a fallen tree.

The grief and outrage we feel at the death of Deseire Quintero is being echoed across California and the Nation. The California Homeless Union, a part of the Committee to Reestablish the National Union of the Homeless, is already mobilizing awareness, memorials and intensified campaigns to expand the Homeless Union movement.
In the last two years, over 200 persons unable to afford traditional housing and forced outdoors have perished in the streets and forests of Santa Cruz County.
We are not going to wait for the next person to die.

Accordingly, the Santa Cruz Homeless Union has re-opened and re-named the former Ross Camp as “Camp Phoenix: In Memory of Deseire Quintero” and hereby issues the following demands:
1. Moratorium on enforcement of all laws designed to or having the effect of criminalizing
the homeless including the issuing of citations for being in a park after dark, “trespass” on public property, and the blocking of sidewalks. Dismissal of all pending charges against persons who were forced to break these laws in order to survive.

2. Immediate opening of the Civic Auditorium and other public buildings vacant at night as emergency shelter for elderly, disabled, and vulnerable folks this winter. Public disclosure of all vacant City-owned, City-controlled and tax delinquent properties and
their designation as available, emergency housing for the homeless. Moratorium on
evictions of low-income renters facing homelessness.
3. Full compliance with the legal requirements of Martin v. Boise, the decision by the Ninth Circuit Court of Appeals that prohibits enactment and enforcement of laws targeting the homeless where no alternative, indoor shelter has been provided. Acknowledge the legitimacy of homes-on-wheels parking in industrial zones; add sanitary facilities & trash pick-ups.
4. Fully restore rights to those at 1220 River Street; provide showers, drinking water, free
access for those who make 1220 River their home and respect the civil rights of all who live at the City-run Camp. Terminate the contract with the Salvation Army and recognize the rights and abilities of 1220 River Street resident to manage the camp themselves.
5. End the seizure of homeless peoples’ personal survival property.
6. Authorize private entities to sponsor portable toilets, provide 24 – hour access to the public bathrooms at the Soquel and Locust Street Garages and Restore full access to Louden Nelson bathrooms (with code if necessary).
7. Demand that the City publicly denounce vigilante violence and harassment against those cannot afford housing and publicly oppose and investigate all on-line solicitations for violence against the homeless.
8. Designate October 27 as Deseire Quintero Day in the City of Santa Cruz.
Millions of people are one paycheck, one eviction, one family medical emergency or one “natural” disaster away from homelessness. If you are homeless or facing the loss of your housing, please contact us about joining the Union.
And to the general public: Please help us with getting the truth out, with statements of solidarity and with direct support to Camp Phoenix. 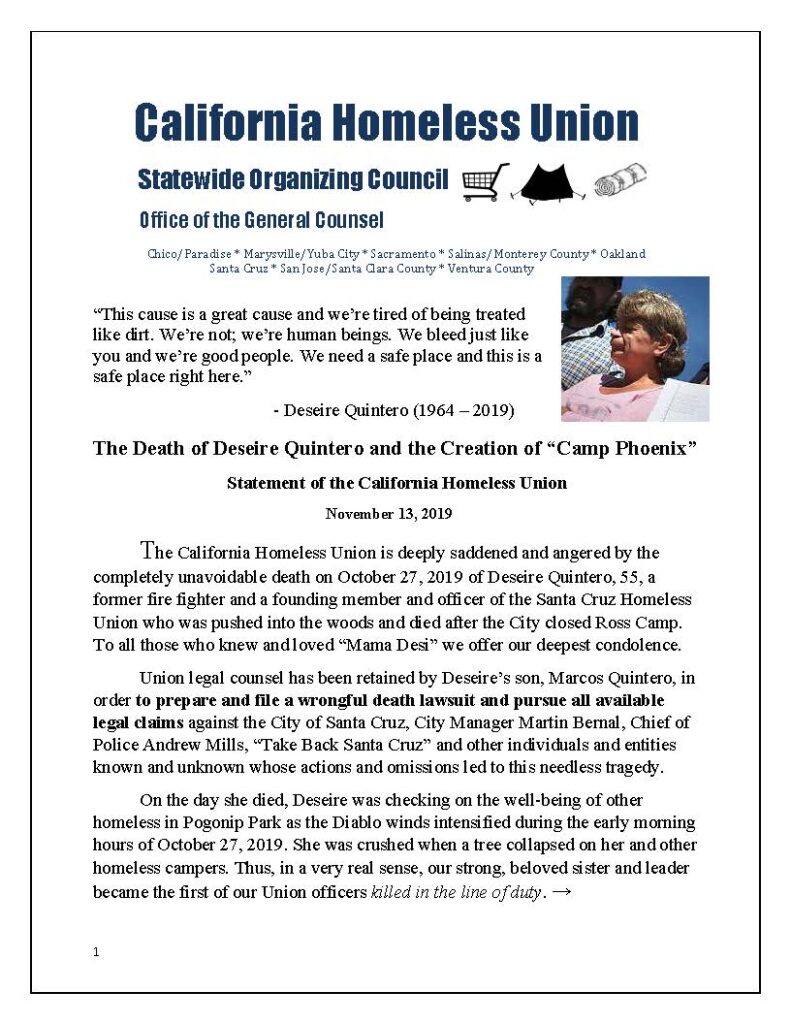