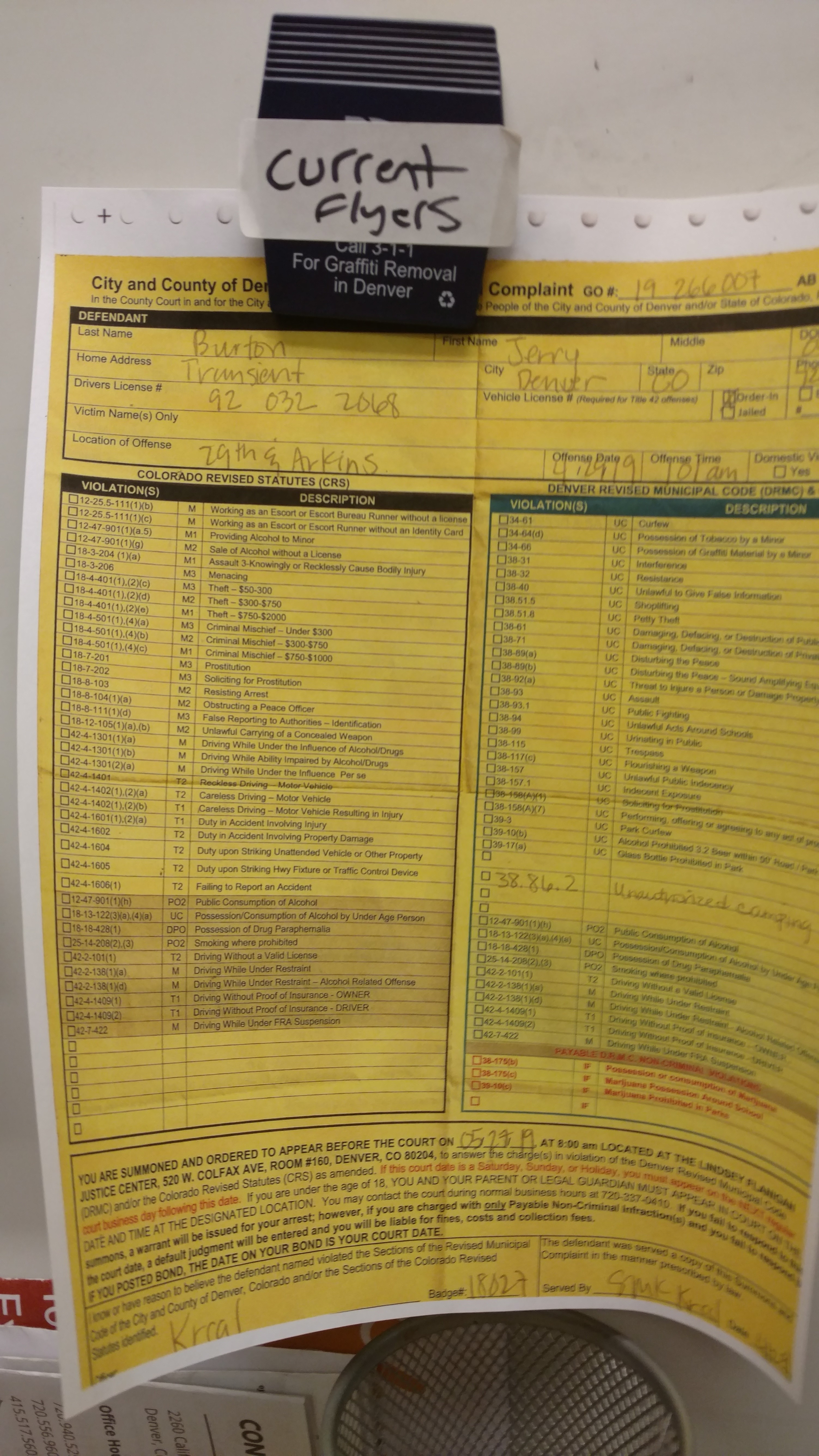 Yesterday, Sunday April 28th 2019, the City sent police and public works on another rampage enforcing the Camping (Survival) Ban and stealing the property of homeless people. Over the past three days police have been evicting homeless people from any place they rest in the city at a level like maybe never before. Yesterday, a Sunday, police were caught on camera taking at least two tents full of people’s property, two shopping carts full of people’s property, as well as tarps, sleeping bags and other personal property. This property was taken with no notice – violating the lawsuit and the US constitution. Furthermore, police were also caught on camera going around the city threatening people with arrest for violating the camping ban.
Facebook livestream of the day sweeps and police raids can be watched here https://www.facebook.com/DenverHomelessOutLoud/videos/2272104936202668/

Jerr-E-ville was threatened by police with camping ban enforcement at Park Ave and California Saturday night, again Sunday morning, and police stayed on site watching the camp all day. At 3pm Sunday afternoon police swarmed the surrounding blocks where people were staying outside with cover taking property and enforcing the camping ban. Jerr-E-ville packed camp facing threat of arrest and moved far out to a less visible area out of downtown by 35th and Arkins.

Sunday night police descended on Jerr-E-ville out at 35th St at midnight threatening residents with arrest for the camping ban. Police gave written warnings to multiple residents and gave Jerry Burton a ticket for the camping ban. Even after these warnings and tickets, police forced all 20 residents to pack up and leave, again with threat of arrest. Jerr-E-ville than was forced to move at 1:30am out of Denver, down to commerce city. In the morning police were called on them out there and forced to leave again. Facebook livestream of the day sweeps and police raids can be watched here https://www.facebook.com/DenverHomelessOutLoud/videos/2044134849226180/
There is no where for homeless people to be in public Denver right now. Right now in Denver, the minute a homeless person tries to sit with property, lay with cover, much less set up a tent, the city send police down on them.
Just over a week before the vote on the Right to Survive we have never needed this right protected more. The votes of homeless people trying to make it to the polls are being suppressed. The lives of homeless people trying to survive are being terrorized.
This must end. Our existence cannot be criminalized anymore…
Contact:
info@denverhomelessoutloud.org