Portland is one city with two very different opinions of itself. Whether or not the concept of our city as a liberal utopia, a playground for the young and a capital of millennial culture started with that particular television show, our city leadership has leaned hard into the idea and the monied interests that are attached. That narrative clashes with the other version of Portland, the one where a history of racism and poor housing protection has combined with the insatiable pursuit of developer dollars to create an avalanching crisis, and one of our own making.

A long pattern of decisions on the part of State and City leadership has prioritized the short term interests of land owners and business interests over the needs of the humans living here, creating this particular point in time where the economic refugees sleeping on our sidewalks and making communities in our shared green spaces can no longer be hidden. The people drawn in by the marketing efforts of Portland leadership, moving here to live in the mythical land of bicycle activism and backyard goats, are increasingly forced to confront the residents of the other Portland, the one where tepid and slow moving City responses have done little to blunt the force of our housing crisis. 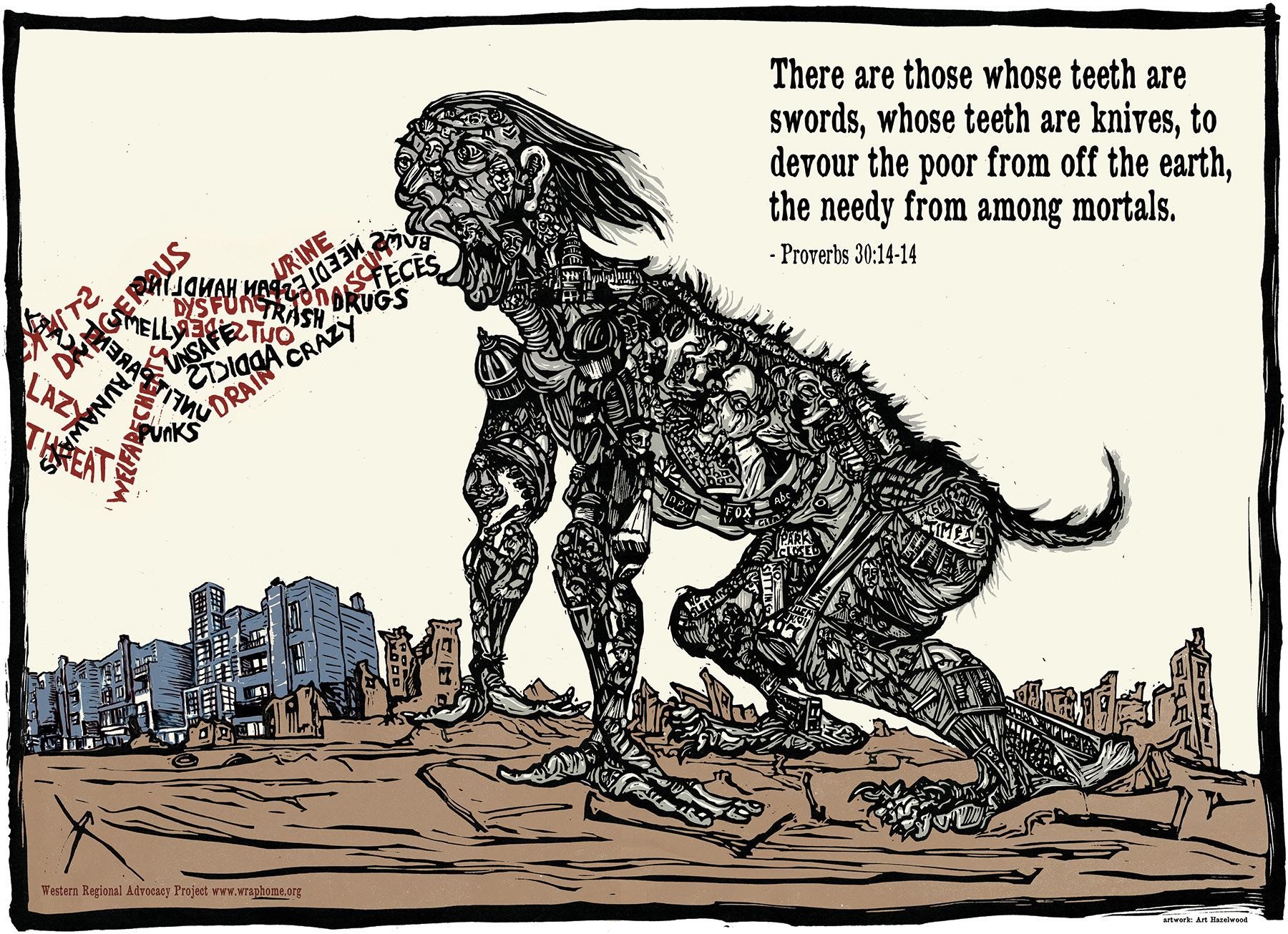 In the face of this dissonance, Portlanders are turning to the police to enforce the boundaries of their world.

We’re gonna start with some numbers, but bear with me- this is important. This is all from the Willamette Week. In the last five years 911 calls have increased here by nearly a third- however less than a quarter of total calls have anything to do with any crime, real or suspected. People are calling to report the existence of someone living in a tent or in their car. Someone who is committing no crime and frequently not interacting with another human being, but simply living in a way that callers finds unacceptable. Police refer to these calls as “unwanted person” reports, and they couldn’t be more right. Portlanders are calling the Portland Police to report the presence of someone who is unwanted in this city, hoping that the cops will make them disappear. We as a city are using the cops to control what members of our community we see and interact with and have to acknowledge as living here.

And when Portlanders call, the police respond. As reported in the Oregonian, more than half of all the arrests made in the city of Portland happen to people sleeping outside. Fifty-two percent of the humans arrested in 2017 were unhoused. According to the last point in time count we have about three percent of our population sleeping outside. Three. And 52 of every 100 arrests here happen to this three percent. 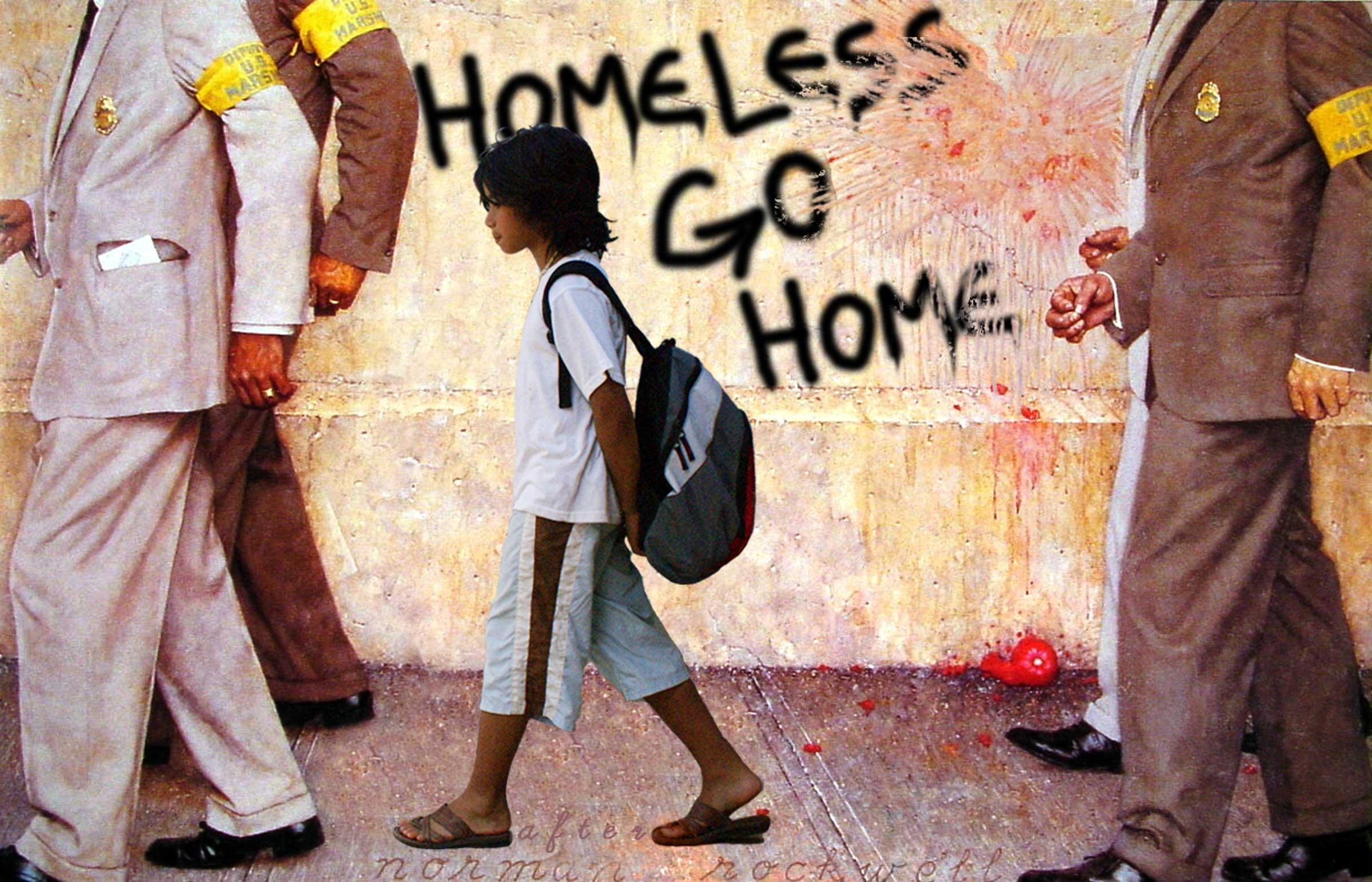 Part of this amazing frequency in arrest is due to the nature of living without walls. The things that a lot of us do inside, like poop, take drugs, argue, not put on pants, become crimes when people can see them. Another part of the reason for this sustained recurring harassment of people based on housing status is due to the surreal legal dystopia we’ve constructed in our city where things like being asleep and sharing food in public have become criminally liable. We’ve already built a system designed to entrap and punish people for being without housing. There is little we can do in public space except spend money that can’t by punished be the law. But none of this would have the impact that it does on the lives of folks outside if half the city wasn’t using 911 and the police as a customer service department for their lives. People in this town are actively demanding that armed government agents forcibly remove people that they don’t want to have to see as a way to curate their experience and lives here, at the human cost of the safety and sometimes lives of the folks they shun.
This is the same as the promise offered by business improvement districts (BID) and enhanced service districts (ESD), like the Clean and Safe empire on the west side or the nascent CEIC in inner southeast. In a BID or ESD, business interests band together with the City to use public spaces and public funds to finance private armed security forces. These forces are then put to work enforcing both standing City code, already punitive and exclusionary, as well as new and more stringent public codes of conduct. These rules are so broad and unfocused that they allow anyone to be ejected from the neighborhood covered by the ESD, an area that again is ostensibly owned by the public. There’s a block of Southwest Ankeny between 2nd and 3rd where it is legal to be excluded if you’re caught blowing your nose- check out the sign by Voodoo Doughnut.

These rule sets allow security forces, often former or active police moonlighting as private security, to act to ensure that only the right kinds of people are present and everyone there is engaged in commerce of some kind. Public space is redefined as an area for the pursuit of consumption, with little or no room for activities that don’t produce revenue for someone. People just trying to live are pushed further and further out in the hope that eventually they’ll cease to exist, and leave nothing behind but a gleaming liberal utopia, a city that works. 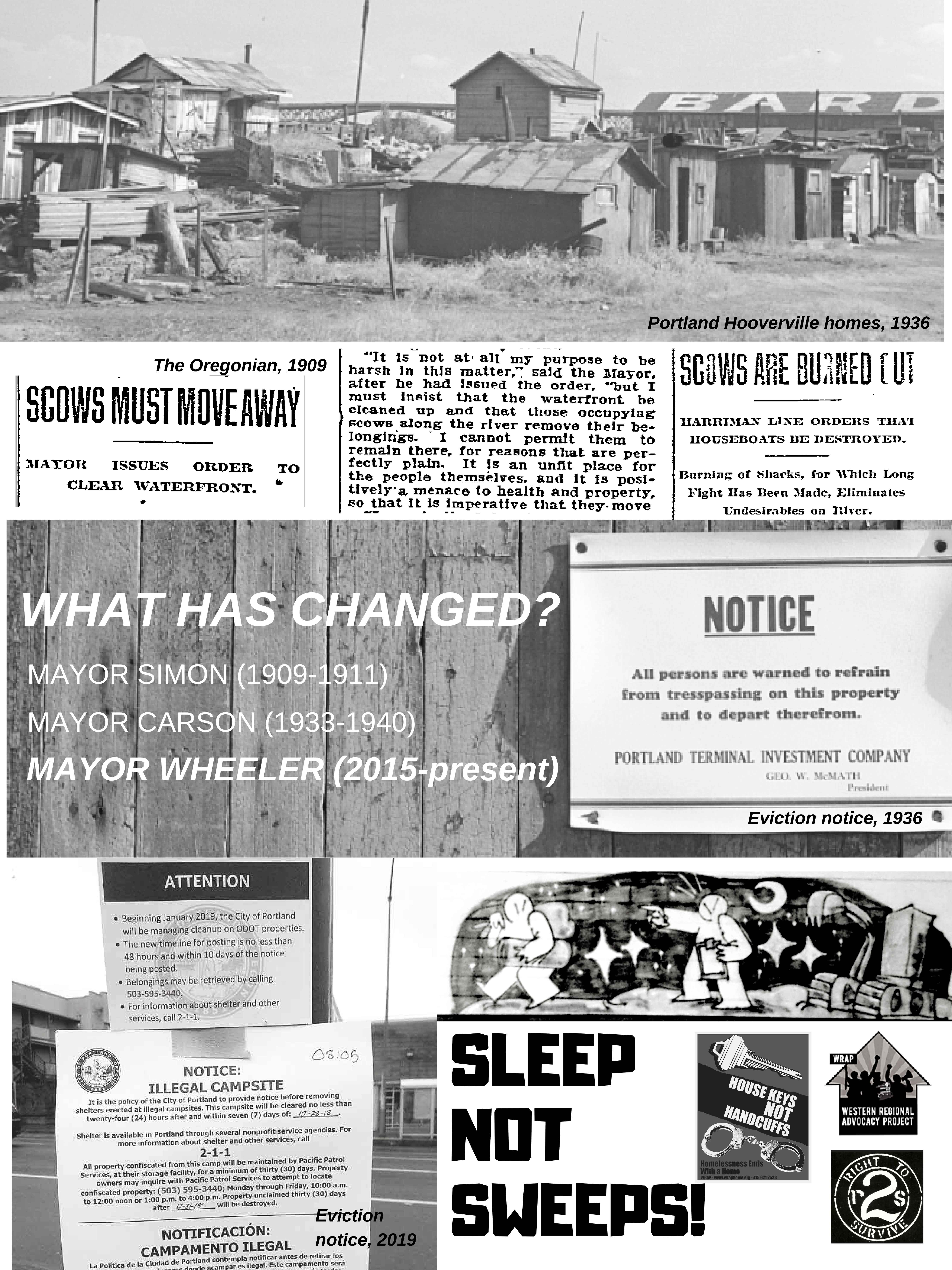 This level of enthusiastic citizen supported policing results in massive legal penalties for people who already struggle to obtain basic necessities, in addition to forcibly segregating Portlanders along class lines. The low level fines and charges issued for so called “quality of life” crimes, crimes that people can’t help but commit when they are denied access to housing, can easily snowball into massive legal actions. Missed court dates can turn tickets into warrants, and seemingly minor fees can take money meant for food and medication. In a city with a ludicrously tight housing market and wait lists years long for subsidized housing, any blip on a background or criminal history check can disqualify a person. Folk’s use of 911 to curate their experience and ensure no one will be uncomfortable shopping at their establishments works to exclude folks living rough from the basic eligibility of engaging in public space now and ensures the maintenance and continuation of their marginalized status in the future.

Also, cops kill people. Whatever else they do, they kill people. It slips people’s minds that the Portland Police Bureau (PPB) remains under federal scrutiny, called a consent decree, for brutalizing and murdering people experiencing mental health crisis- something that in this town equates almost entirely with people experiencing houselessness. In 2006, James Chasse was killed by the police. Chasse experienced schizophrenia as well as houselessness, and had a hard earned mistrust of the PPB. When he saw officers approaching him in a NW park, he ran. Cops tackled him, breaking 16 ribs and puncturing his internal organs. He died in police custody, after EMT’s failed to deliver medical care and the jail refused to admit him until he’d been seen at the hospital. This killing and many like it led to the Department of Justice (DOJ) ruling against the city of Portland in 2012. The DOJ action has done little to keep our neighbors from being killed. Just this year in January, Portland police shot Andre Catrel Gladen to death in a stranger’s home. Andre was legally blind and lived with schizophrenia. Andre was also homeless. He was scared, in a neighborhood he didn’t know and worried that he was being followed. He knocked on a door at random, asking for help. The resident, hoping they would help, called the police.

Using the police to control who is and isn’t a valid Portlander, in the best case, creates a segregated society, where perceived housing status acts as an indicator of insider or outsider status, and worse case leads directly to legally protected murder. We have come so far along in the American project to deconstruct any semblance of organized community support, any system of humane resourced crisis intervention, that the only people who will answer when we try to get a stranger help in the middle of the night are the police. And the police helping is at best a zero sum operation- one group benefits from another group’s harm. The police are well practiced in the forcible segregation of populations, of keeping some people in the shadows and under bridges so that other people can get tiny cupcakes and artisanal ice cream cones in peace. We need to stop asking police to make people go away, because sometimes they do. 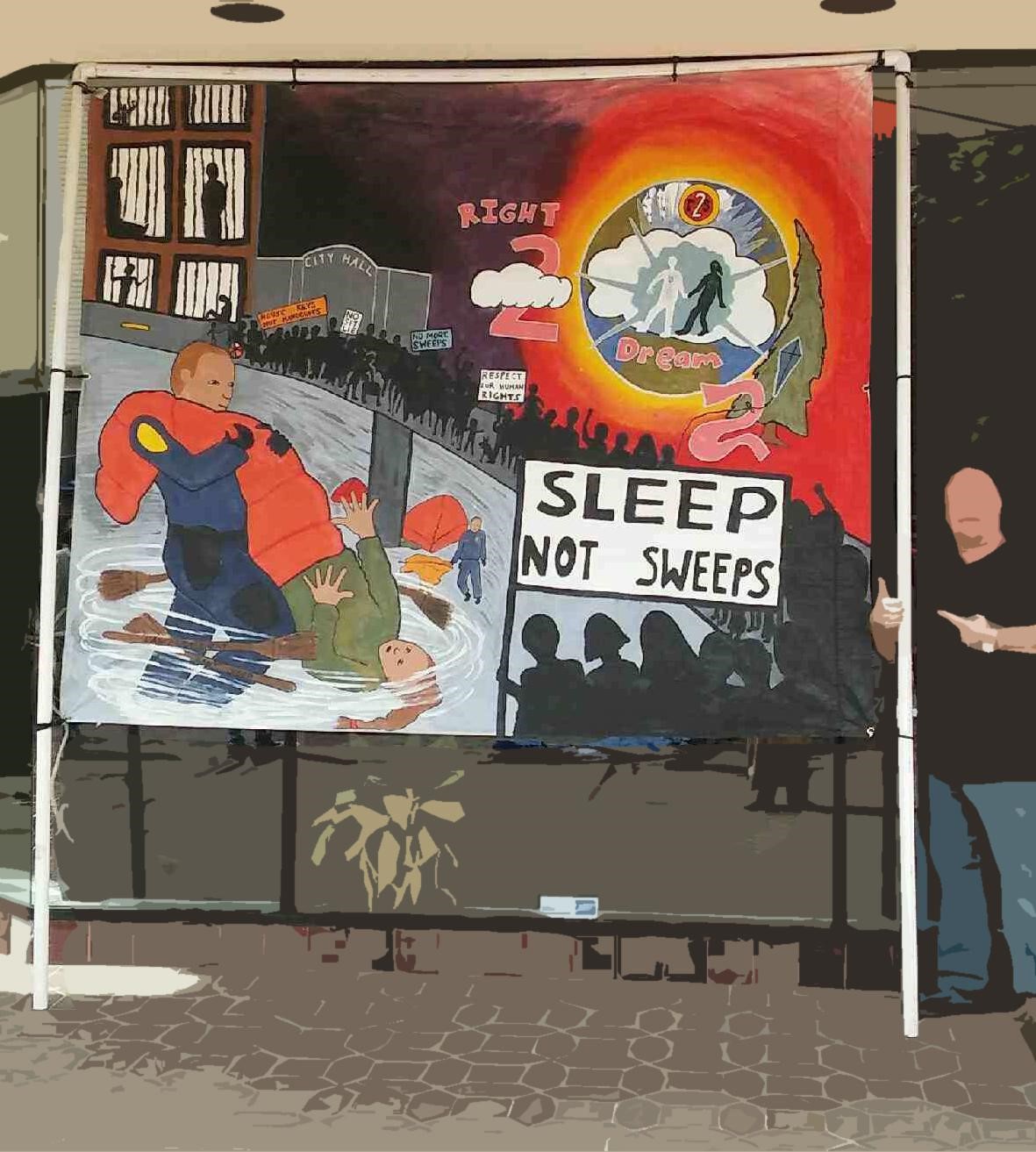