Denver, CO — On Friday April 19th at 8:30am Jerry Burton will be back at court again for using blankets to cover himself in violation of the Unauthorized Camping Ban (better named Survival Ban). On November 28th 2016 Jerry was ticketed for the Survival Ban. In April 2017 he, and two others, went to trial on this charge. Jerry was found guilty of surviving while homeless. During the trial where defendants refused to use the word “camping” and instead used the more accurate word “surviving,” the prosecution famously said, “you know it is illegal to survive anywhere in the city of Denver?” 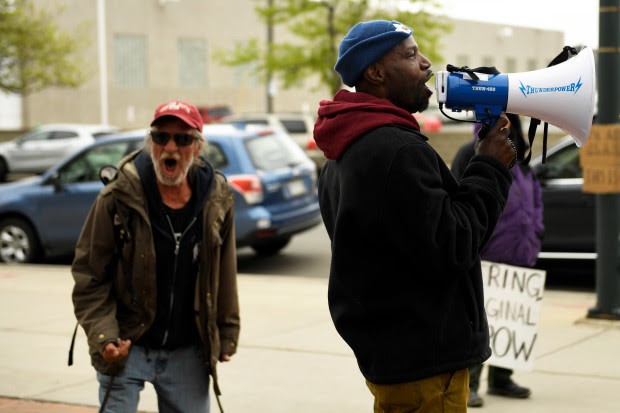 Now Jerry is back at court for the fourth time in the last couple months on the same Survival Ban ticket because he refused to do community service for an unjust law. Two times he had to go to court only for procedural things. The third time he was scheduled for a hearing but had a health crisis and ended up in the hospital.
The court could throw Jerry in jail at this hearing on Friday – ultimately for trying to survive with a blanket in the winter. This is what our city is spending its resources doing.
Jerry states, “I feel as strongly about not doing community service for an unjust law as the court feels about enforcing this unjust, discriminatory law that targets one class of people. The court or no other entity gave me the the right to survive, my Creator did as he did all of us.”
Jerry Burton is a vet who has been without housing living on the streets of Denver on and off for the past couple years. He has a housing vouch through the VA but housing places he calls continue to turn him away saying he needs to make 2 ½ times the amount of rent to live there – even though his voucher covers all the rent. Right now he lives in a tent on the corner of 27th and Arapahoe helping out others on the streets and refusing to be moved until he finds housing.
Come to the Lindsey Flanigan Courthouse on Friday April 19th at 8:30am to support.
Contact:
info@denverhomelessoutloud.org
720-940-5291