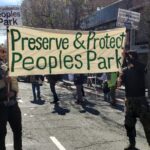 Who: Sponsored by the People’s Park Committee, the Bay Area Landless People’s Alliance, the Grey Panthers, Neither Here nor There, Berkeley Friends on Wheels, Poor Magazine, and the United Front Against Displacement

Where: People’s Park, 2556 Haste Street, Berkeley California with a march demonstration to follow.

What: The UC Berkeley administration has announced plans to replace historic People’s Park, site of the 1969 student struggles, with student housing. In addition, demonstrators demand action be taken against a driver who rammed into their ranks, and over the legs of a homeless man on a sidewalk, during a peaceful protest last week on January 22.

Why: Administrative officials have not even allowed public comment or participation over their plan to destroy the historic park. One administration official explained, that “those people have had their chance.”

In a “Hands Off Our Park: Defend People’s Park from Cops and Chainsaws” protest last week against the plan, a peaceful protest was interrupted by a reckless driver who pushed up on demonstrators and struck a sleeping man as he fled the scene driving on the sidewalk and driving the wrong way on Durant Avenue. Demonstrators tried to tell police about the crime, but were met with indifference. Police officers did not even take notes of their reports. Lack of follow up information or public investigation by officials betrays a callousness over the the concerns of people in the community, and is reflective of the overall attitude towards displacing People’s Park, and towards the wider context of displacement in the greater region and country.

Representatives from struggles against displacement from elsewhere in the bay will attend in solidarity as well.