Today marks a turning point in the long fought battle against the Los Angeles County $3.5 Billion jail plan. In a show of force, the JusticeLA Coalition rallied this morning calling on the Los Angeles Board of Supervisors to oppose jail construction. Thanks to the leadership of Supervisor Keuhl who voiced her opposition to the women’s jail, the entire board unanimously supported a halt to the jail plan and expressed a desire to invest in community-based alternatives. Supervisor Janice Hahn described the decision as a “collective will to put the brakes on,” while Supervisor Keuhl attributed the board’s shifting position to the persistent advocacy of community. Supervisor Barger, who has historically leaned more conservative on the issue, said she would prefer to “flatten [the Lancaster detention center] and put in affordable housing tomorrow.” This is a huge transformation for a board that has continuously voted to move forward with this dangerous and fiscally irresponsible jail plan. 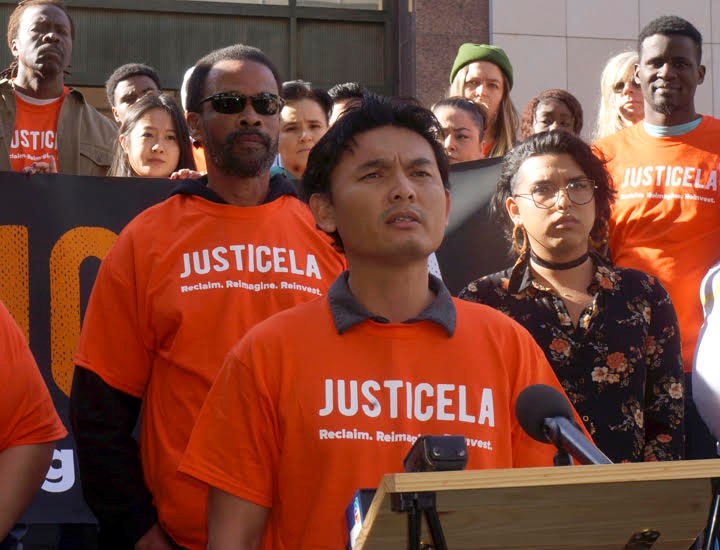 The collective people power of CURB members through LA No More Jails and JusticeLA has moved mountains today. The leadership of the Youth Justice Coalition, Critical Resistance, Dignity and Power Now and other CURB members cannot be understated in this victory.

While the question of whether the board will support CCTF (the mental health jail) still remains, Supervisor Barger made it clear that “If you’re going to take Mira Loma off the table, we need to look at the entire jail plan.” The board would also like to hear input from LA County’s new sheriff, Alex Villanueva, who has publicly aligned himself with the demands of community calling for decarceration, community-based mental health treatment and a stop to jail construction.

We must keep Sheriff Villanueva accountable to his campaign promises and his public statements! Read JusticeLA’s Letter to Alex Villanueva here.

The LA Board of Supervisors will reopen the conversation around the jail plan again this month, so now is the time to put pressure on the supervisors and the sheriff to explore a true decarceration plan for Los Angeles County that includes pretrial reform and community-based treatment. They need to hear directly from you! Here are some ways to mount the pressure:

Your tenacity, commitment and support has put Los Angeles on a new path. Today we celebrate so we can continue the fight tomorrow. Because when we fight….WE WIN!