Who has rights to public space in downtown Denver?
https://www.thedenverchannel.com/news/360/who-has-rights-to-public-space-in-downtown-denver-

What Is Your Local Business Improvement District Funding?
https://nextcity.org/daily/entry/what-is-your-local-business-improvement-district-funding

The case against the Downtown Berkeley Association and business improvement districts
https://www.berkeleyside.com/2018/09/25/opinion-the-case-against-the-downtown-berkeley-association

The Complex Realities of Private Dollars for Public Spaces
https://nextcity.org/daily/entry/the-complex-realities-of-private-dollars-for-public-spaces

The Complex Realities of Private Dollars for Public Spaces
https://nextcity.org/daily/entry/the-complex-realities-of-private-dollars-for-public-spaces

We can’t solve homelessness until we understand how we’ve made it worse. What’s good for businesses and property owners only hurts the homeless.

THE POLICY ADVOCACY CLINIC AT UC BERKELEY SCHOOL OF LAW RELEASES CALIFORNIA BUSINESS IMPROVEMENT DISTRICTS REPORT..HOMELESS EXCLUSION DISTRICTS The Policy Advocacy Clinic at UC Berkeley School of Law conducted a study for the Western Regional Advocacy Project (WRAP) to understand the effects Business Improvement Districts (BIDs) have on houseless communities in California.Patrolling and controlling our public spaces, sidewalks, streets, and parks, Business Improvement Districts (BIDs) are privatizing our downtowns and main thoroughfares. Our public spaces are becoming corridors and shopping centers that are welcoming consumers with open arms and excluding everyone else. Most particularly impacted by this emerging trend are the houseless communities that see areas to rest and sleep, free from harassment and criminalization, shrinking.A BID is a special, legal subdivision of the city, with the legal authority to create their own districts, effectively claiming ownership over neighborhoods. The city collects assessments (taxes) from property owners, including city property and public spaces within the district, and then distributes that money to the BID. The BIDs can use those funds however they see fit to serve businesses within the district with little to no public oversight.This study “Homeless Exclusion Districts: How California Business Improvement Districts Use Policy Advocacy and Policing Practices to Exclude Homeless People from Public Space,” is the first of its kind and contains groundbreaking research on how BIDs impacts our local communities and reflect the impacts of BIDs across the country. The report analyses the several ways in which current BID policy and policing practices violate California law and infringe on the legal rights of homeless people. The UC BerkeleyLaw Policy Advocacy Clinic surveyed approximately 189 BIDS in 69 of California’s largest cities to study the relationship between BIDs and houseless people. Clinic student Shelby Nacino states “Our research shows that BIDs have been successful in pressing state and local lawmakers to criminalize homelessness. The growing number of BIDs since the legislature gave them greater authority and autonomy in 1994 correlates strongly with a striking increase in anti-homeless laws.”The study found that “BIDs violate California law when they spend property assessment revenue on policy advocacy… BIDs may violate additional state laws when they spend assessment revenue collected from public properties within their districts on policy advocacy… BIDs and their agents may violate state, federal, and international law through their policing practices, including the infringing on the legal rights of homeless people.”BIDs have been at the forefront of the criminalization of homelessness, gentrification, and displacement of poor people across the country. In the Bay Area, we see and experience the backlash of BIDs’ influence on public policy, privatization of public spaces and policing every day. Unfortunately, the repercussions of BIDs are visible not just in the Bay Area. Benjamin Dunning from Denver Homeless Out Loud stated that business districts in Denver started to take sections of sidewalk away. “This was public space, and they were offering it up to private business… The business improvement district made environmental changes to make it more difficult for homeless people to exist in that area.” BIDs are privatizing public space across the country and with privatization comes policing, criminalization and displacement of the houseless, buskers, street vendors and the local poor.“BIDs will go Block by Block to ensure that every sidewalk, street, and park serve to benefit the businesses that are in the district. Public Space has become nothing more than the hallways of a shopping mall and if you are in that hallways you better be there to shop, or someone might chase you out.” says Paul Boden of WRAP.With the release of this study “Homeless Exclusion Districts: How California Business Improvement Districts Use Policy Advocacy and Policing Practices to Exclude Homeless People from Public Space,” we hope to bring greater awareness to how our shiny new shopping spaces are created, and what goes into their creation–mainly our tax dollars and our freedom.

Posted by Homeless Bill of Rights Oregon on Wednesday, September 26, 2018 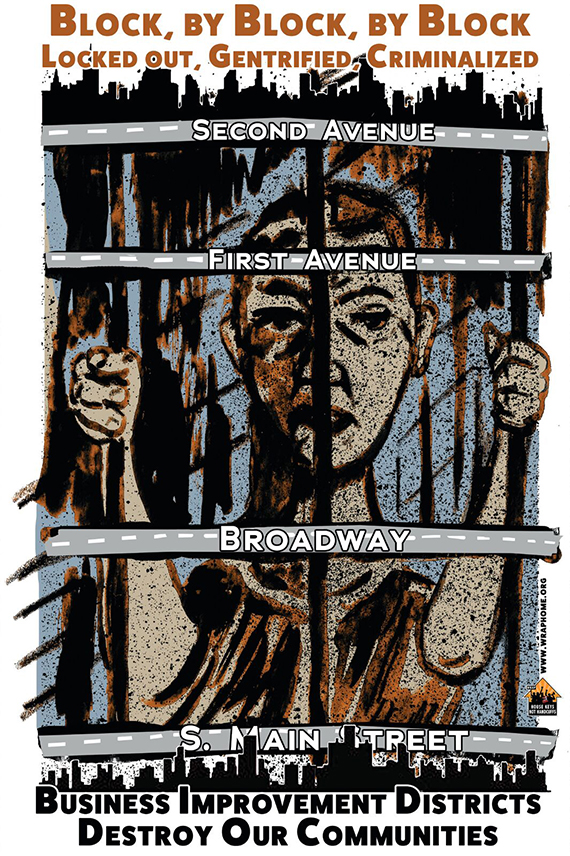