The faces on the streets of Portland are more strained, more frustrated, more resilient than we’ve seen in many years. Portland has increased the ways they address houselessness. Yes, they have opened more shelters and have a one shop stop of services coming in the fall 2018. As if it’s the answer to the houseless prayers (SMH). However, the number of unhoused neighbors has also risen. The stepped up measures of Police stops and profiling of houseless has changed the atmosphere. Folks are afraid to walk to food and services for fear of having their names ran, bags search or confiscated, asked to show ID, profiled for appearing houseless.

The Mayor’s office and Pdx Police, Oregon Dept of Transportation and Metro are SWEEPING unhoused neighbors at alarming rates. So folks don’t want to leave their spots fearing targeting or that their stuff will be gone when they return. In some areas displacement happens every (3) days. One hour is allotted to move belongings. Anything left after that is either bagged for folks to claim at a far off facility or thrown away as bio hassareds. 24 hour to 7 day notices are not always posted creating another level of trauma. Missing during these raids apparent lack of social service agencies or mental health providers present when SWEEPS are taking place to support our unhoused neighbors.

Recently, a member of Right 2 Survive was offered the opportunity to research and map the number of SWEEPS, frequency and estimated number of folks displaced. Here is a sampling of the findings:

-Over the last 18 months or so, campsite sweeps have significantly increased in Portland. The last 8 months have a count of sweeps above the total average (mean=112.4 per month), showing that the trend is consistent.

-While campsite reports by the public have increased as well (One Point of Contact data), the estimated number of reported campsites in those reports as given by the City of Portland’s HUCIRP program has remained stable.

– The five neighborhoods with the highest quantity of sweeps over this time period are Buckman, Lloyd Center, Lents, Old Town/Chinatown, and Hosford-Abernethy.

Similar tracking work has happened in other cities with alarming stats. The use of displacement and criminalization tactics to manage houselessness is not solving the issues only fostering larger ripples in a broken system.

It is no wonder the faces are strained and flustered. Having constant threat of harassment from police by profiling, SWEEPING and complaints to City call in numbers, folks have little time for anything else. Uncertainty, sleep deprivation, summer temperatures as well have strained and flustered our neighbors without walls. There is no end coming in the foreseeable future for Portland’s houseless. Neighbors without walls are resilient. They will be moved again. They will be targeted by injustice and they will come together to fight back. We will continue to track and record these despicable tactics aimed at destabilizing the houseless and targeting them with criminalization. 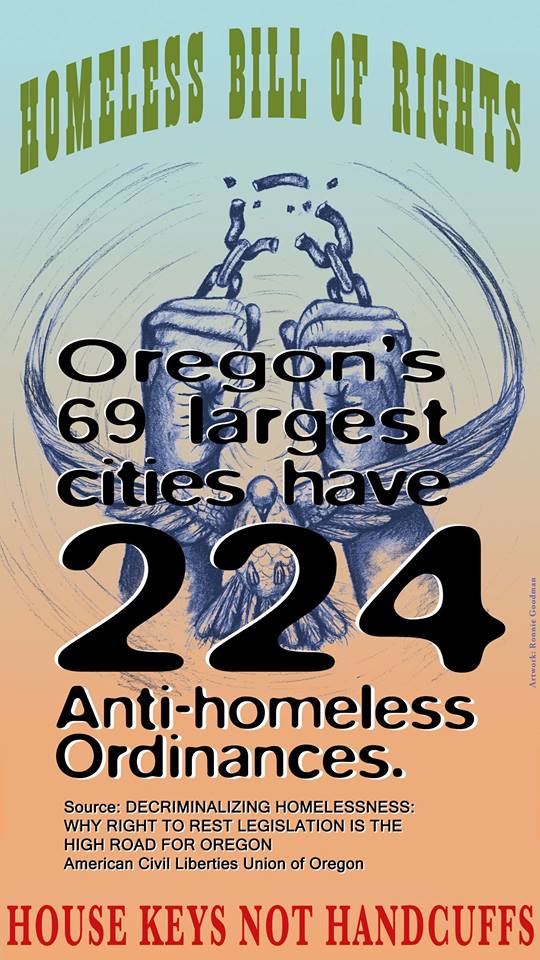