Engage in a movement to end local governments’ abilities to create and enforce discriminatory laws by overturning laws aimed at removing poor and homeless people from public space.

Fight for the Homeless Bill of Rights (HBR) Campaign in California, Colorado and Oregon. 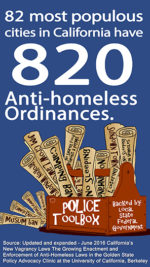 Develop legal strategy and support lawsuits, legal actions, to fight criminalization and violence against homeless people across the country 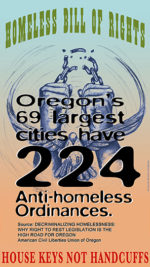 Support organizations and individuals working on Homeless Bill of Rights campaigns in their respective states as they contact us.

Continue to engage and consult with the national Homes-not-Handcuffs campaign led by the National Law Center on Homelessness and Poverty and National Coalition for the Homeless. 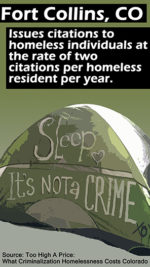 Update and disseminate Without Housing: Decades of Federal Housing Cutbacks, Massive Homelessness and Policy Failures, WRAP’s groundbreaking report and organizing manual, that has been downloaded more than 40,000 times from WRAP’s website.

Provide accurate data to organizers, activists and local policy makers on federal housing cuts and their implications on our communities.