For anyone who has spent time locked inside a cage, whether that is a jail or prison cell or the locked arms of the psychiatric system, it is clear that there can be no healing in incarceration. The current wave of expansion of the prison industrial complex has coupled mental health care with incarceration in a way that makes it seem impossible to untether the two. A clear example of this is Senator Weiner’s SB 1045 legislation which would expand conservatorship to target mentally ill people and drug users and sweep them off the streets into incarceration. At WRAP, as a coalition of organizations that work with mentally ill street based people we can see that anytime spent locked up with your freedom and liberties stolen deeply deteriorates a person’s mental, physical and spiritual health.

WHAT IS CONSERVATORSHIP?
Conservatorship is the process through which people are locked inside psychiatric institutions against their will. The process follows that a police officer or licensed clinician can order a 5150 temporary hold in a locked psychiatric institution if a person is “gravely disabled” and/or seen as being at harm to themselves or others. From there, a psych ward can hold a person for up to 72 hours more if they are still seen as a risk to themselves or others. If a clinician feels this person should be under conservatorship they request an investigation and if successful petition the court for a temporary or permanent conservatorship. Temporary conservatorships are 30 days but can be renewed indefinitely.

WHAT DOES SB 1045 DO?
SB 1045 expands the criteria of eligibility for conservatorship from gravely disabled to also include people who are chronically homeless and whom the state views as being incapable of caring for their own health and well-being due to mental illness or substance use. The evidence for this assessment is based on high-frequency emergency department use, high-frequency jail detention, or frequent detention to the 72-hour hold provision.

WHY IS THIS A PROBLEM?
The prison industrial complex is ever expanding. At its most insidious, it takes up words and ideas related to healing, treatment and justice and transforms them into arms of the prison system. Over the past few years we have seen expansion of mental health jails, added “services” in prison, court mandated treatment – all coercing people into what the state believes is best for them. For WRAP members, this conservatorship expansion simply means an increase in the criminalization of homelessness in the name of “public safety” or “public health” without truly addressing the core of issue housing. Homelessness is a housing issue first and foremost.

WHERE DOES THIS COME FROM?
The U.S. has a long history of dehumanizing, incarcerating and violating the rights of disabled people, mentally ill people, drug users and street-based people. The laws vary from the Ugly Laws geared towards removing physically disabled people from public space whose impacts ricochet into the contemporary quality of life ordinances which criminalize poverty. They also include patronizing and oppressive policies like those surrounding people deemed unfit to stand trial. In California, people deemed too ill to stand trial can be held in state hospital prison indefinitely. The conservatorship laws are just another example of removing people from public space and denying people their basic rights under the guise of support.

WHAT WE WANT INSTEAD
As WRAP is fighting the ways that homeless people are criminalized for existing – we know that there can be no healing or liberation in policing, imprisonment, courts and surveillance. There are brilliant ideas that organizers who identify as mentally ill, who use drugs and are street based have come up with to maneuver these problems.

● Expansion of peer-based community organizations that are not run by the police, sheriff’s department and allow for people to leave.

● Expansion of drug treatment centers with a harm reduction philosophy and a low threshold entry point.

● Access to non-punitive, non-judgmental, non-patronizing case management, intensive therapy, access to psychiatric medications if a person chooses to medicate in that way.

● Access to education about the use and impact of psychiatric medications.

● Access to 24-hour crisis centers that are not run by the police, sheriffs and allow for people to leave.

● Access to health care that is voluntary and honors a person’s dignity and self-determination.

● Creation of hygiene centers which include restrooms, places to wash your clothes and things and access to clean drinking water.

● Access to space to be with community outside of the watchful eye of the police.

● Self-determined encampments that are free from police sweeps and harassment.

● Prison reentry services that are non-punitive and run by formerly incarcerated people.

● Safer injection sites for people who use intravenous drugs.

● Safer spaces for people who use crystal meth or other uppers.

● Guaranteed minimum income for all people.

● An end to ICE and immigration raids.

● Training of street-based people in overdose prevention methods like narcan.

● Access to nature for street-based people including an expansion in the public park systems without time constraints or police presence.

● Decriminalization of drug use.

● Decriminalization of quality of life ordinances. 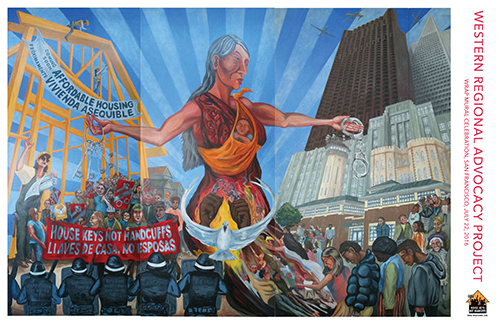