Picture the Homeless is so excited to announce the release of our latest policy report, The Business of Homelessness: Financial & Human Costs of the Shelter-Industrial Complex. 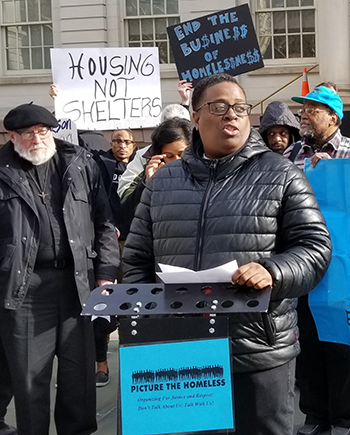 It’s the result of a year-long investigation by our research committee into the fiscal policies and priorities that influence the lives of homeless New Yorkers, and how those priorities could be adjusted to support permanent, stable, and decent housing for the lowest income New Yorkers.

This year marks the first time that the city’s share of homeless shelter spending will top ONE BILLION DOLLARS, bringing the total expense budget for DHS to 1.8 billion dollars. With so much money moving around, it’s clear that homelessness is “big business” in NYC–but if the system is bad for the budget, bad for homeless people, and bad for neighborhoods, who exactly is profiting?

Full video of the press conference where we launched the report is available here.

Photographs of the launch event are here.
Full text of the report is available here.

Please go check out the report. We’re proud of it – but this is the beginning, not the end, of our work to end the #BusinessOfHomelessness. Follow us on social media and stay tuned for all the exciting actions and events we’ll be rolling out.

This mess may be the consequence of multiple mayoral administrations refusing to confront the problem, but the Bill de Blasio Administration has the power to help end the Business Of Homelessness by backing the bold brave ideas coming from homeless folks.

…See below for quotes from us and our allies!

“‘Business as usual’ isn’t working,” said Charmel Lucas of Picture the Homeless, a shelter resident and one of the primary researchers on the report. “Shelters are costing taxpayers 1.8 billion dollars a year, but it’s not helping change the situation. The current status quo may be the result of bad decision-making by multiple mayoral administrations, but Mayor de Blasio has the power to help end the Business Of Homelessness by backing the bold brave ideas coming from homeless folks.”

“This groundbreaking report provides hard evidence for what we’ve always known is true – not only is building housing for our lowest-income neighbors possible, doing so would actually prove more financially sustainable in for our city in the long term,” said New York City Council Member Stephen Levin, chair of the Committee on General Welfare, which oversees homeless spending. “I applaud Picture the Homeless for its fearless work, and urge the de Blasio administration to start to adapt some of their common-sense, cost-effective solutions.”

“For years homeless people have known that the shelter system was profiting on their backs,” said Scott Hutchins of Picture the Homeless, a shelter resident and report researcher. “Now we have not only assembled the evidence to prove our case, but realistic recommendations to correct the problem and end the homeless crisis.”

“Thank you to Picture the Homeless for shining a light on who is profiting from our homelessness crisis,” said New York City Council Member Helen Rosenthal. “This inexcusable situation shows no signs of abating. New York City cannot claim that it is one of the great cities of the world when tens of thousands of its own residents cannot find affordable shelter. We must intensify our efforts to both protect existing affordable apartments and create sufficient levels of new affordable housing.”

“We recognize that the city’s mandate to provide shelter is a necessary social safety net for many New Yorkers,” said New York City Council Member Jumaane Williams. “But the system that we have today is no longer a safety net, and has become an increasingly permanent last stop for extremely low-income New Yorkers — at great personal and public cost. Homeless people need housing, not shelter – and that’s what the rest of New York City needs as well.”