Welcome to Movements Monday, where we hope you will support WRAP and other groups that address root causes through powerful people power! (we made this up but it’s a good idea – yes!?!)

From now until the end-of-the-year, we are sending a few emails that highlight the unique and vital work of WRAP. Today we are highlighting WRAP’s incredible work with artists to create works of art that are a important part of our organizing. These pieces are created in a back and forth process from organizers to artists. We are also highlighting our match that is happening in November and December! Support WRAP today and your donation will be doubled up to $15,000 by a group of generous donors. A $100 donation will grow to $200- thank you!

(The following piece written by Art Hazelwood, WRAP’s Minister of Culture, is adapted from House Keys Not Handcuffs: Homeless Organizing, Art and Politics in San Francisco and Beyond. By Paul Boden, with additional essays by Art Hazelwood and Bob Prentice. You can get a copy for a $30 donation! Or four copies for a $100 donation ($20 discount). Just let us know when you make your donation how many House Key’s books you would like – (hint: they are great gifts! More info. here).

Without Housing WRAP’s first use of Artwork 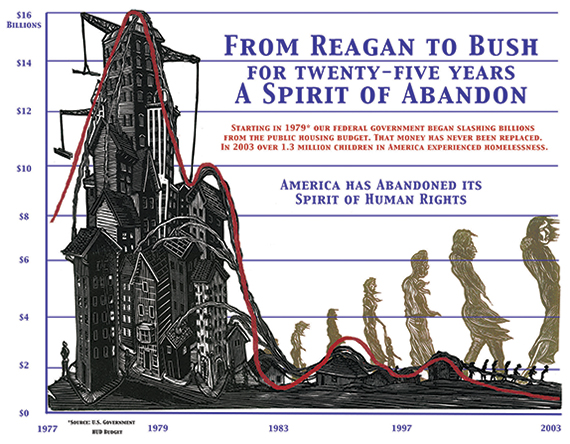 Over the past 30 years, as the disastrous proportions of contemporary homelessness became the everyday world of American life, artwork has increasingly served as a vital part of organizing and bearing witness to the struggles of homeless people. In San Francisco, artists and activists have forged relationships that have continued to expand, with illustrations in the Street Sheet (San Francisco’s Street Newspaper), wheat-pasted posters, protest banners, stencil paintings, murals, exhibitions, and official and unofficial public art campaigns.

In 2005, in order to push back against those forces attacking homeless people from the federal and state level, Paul Boden transitioned from the Coalition to form WRAP. Their first major project was the publication, Without Housing: Decades of Federal Housing Cutbacks, Massive Homelessness, and Policy Failures. WRAP brought together a group of artists to illustrate the data, showing the real sources of national homelessness. Without Housing graphically shows the decrease in rural housing and declining spending on public housing in contrast to increased mortgage deductions and military spending. The artists who tackled the data had to create images that were evocative and yet still showed the factual basis of the argument that there was a cause behind the vast increase in poverty and homelessness over the last 30 years. 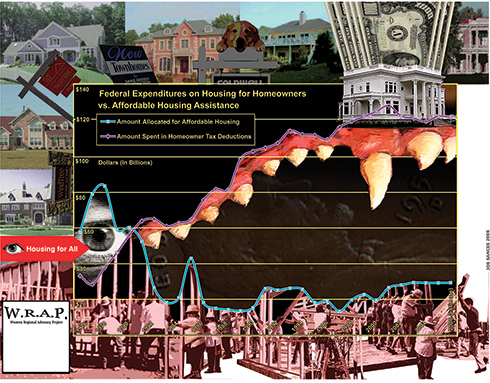 Ed Gould, Claude Moller, Jos Sances and Art Hazelwood created posters for Without Housing. Jos Sances’ image of the rise in the mortgage deduction tax breaks versus the decline of spending for affordable housing is presented as a dilemma resting on the fangs of a dog. Where the graph shows more spending on affordable housing, an eyeball and an arrow point to “housing for all.” The graph lines cross in 1981, the year when there was more spending on mortgage deductions than on affordable housing. The image seems to say, “Look here to see the cause of the current dog eat dog world, the gaping difference between rich and poor.”

In the early 2000s, the first of the dot com bubbles swept through San Francisco, driving up housing prices and displacing poor residents. One byproduct of the fight against displacement was the creation of the San Francisco Print Collective (SFPC), a collective of artists who met at Mission Grafica print workshop. The SFPC worked with organizations by introducing activists to the tools of poster making: design, printing, and distribution so that they could create their own voice. 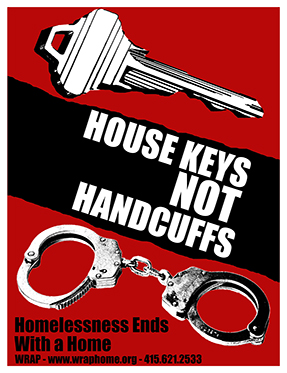 Beginning in 2001, after their initial campaign with anti-displacement organizations, the SFPC turned to work with the San Francisco Coalition on Homelessness (SF COH) “Fuck the Homeless, Save the Tourists,” encapsulates the dominant view in the San Francisco power structure. This large-scale poster showing Mayor Willie Brown on the cover of the San Francisco Chronicle was wheat-pasted in many locations, including in front of the Chronicle offices. Another poster from the SFPC announced the conference of the National Association of Street Newspapers (NASNA). Paul Boden, who was then the Director of the SF COH remembers seeing Valencia Street plastered with NASNA posters and feeling the power of this very visible presence.

Having done the research and created the talking points for the argument against the 30-year long war on poor people, WRAP member groups came together in 2010 for a series of meetings and direct actions. And artists created the imagery for the actions.
The San Francisco Print Collectives “House Keys Not Handcuffs” protest placard can be read a long way off. The placard boldly makes clear the central theme that WRAP has adopted.
In addition to earlier means of dissemination, WRAP now uses the artwork in some new ways. The wraphome.org website is set up to share visual resources with street papers and organizations nationwide. Allied organizations can download and use the imagery. The artwork also works well to add visual power to email newsletters and public presentations.

In 2011, WRAP wanted artwork to address the revolving door of homelessness and prison. Art Hazelwood had worked with Ronnie Goodman in the printmaking class of Katya McCulloch at San Quentin State Prison. Goodman’s artistic skill and personal knowledge of prison and homelessness led him to produce a linocut print representing the forces of the state in the form of “Tax, Oil, Banks, War, Prisons, Lobbyists” that are deployed against protesters; at its core it shows the prison system. Shortly thereafter, Goodman was released into the exact system he represented-from prison to homelessness. After his release he found the art program at Hospitality House and was able to continue his artwork there. His work with WRAP, Hospitality House, and the Street Sheet has made him one of the most important artistic voices on homelessness. 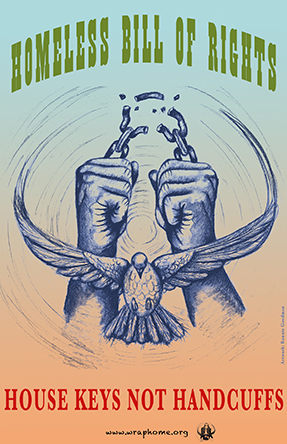 Ronnie Goodman was asked to design the campaign logo for WRAP’s Homeless Bill of Rights. It shows hands breaking free of chains and, significantly, a pigeon flying out-not a dove of peace, but a pigeon-as Goodman has specified. He felt the pigeon was more closely associated with homelessness than the dove.
The Homeless Bill of Rights campaign also enlisted artists to create posters. Many were new to the struggle for homeless rights. These artists are not only fighting back against attacks on homeless people. They are creating imagery that shows what is possible. Instead of demonization and criminalization, society could focus on housing and rights.
As activists work to make social justice a reality, artists will continue to be there to lend a hand, reflect on the experiences of homelessness, document the struggle, and use their skills to give visual form to the real story of the ongoing war against homeless people.

The San Francisco Poster Syndicate (SFPS) is a recently formed political poster collective that has worked with WRAP, Hospitality House and the Coalition on Homelessness.
In the 2016 elections San Francisco politicians were again using attacks on homeless people to ride to higher office. A ballot measure was put forward to make it a crime to use a tent. Of course, it was already illegal to sit or sleep on San Francisco streets so the proposition was largely a political stunt. The SFPS created a series of posters opposing the anti-tent initiative. They printed the posters on the streets, distributing them for free. One of the poster designs was then adapted to create a mural. 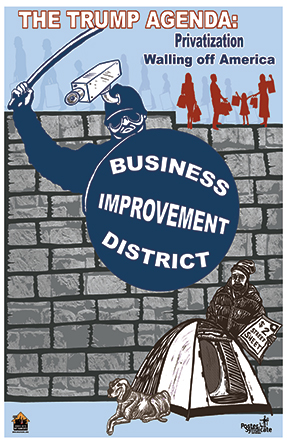 WRAP brought its members together in the Summer of 2017 in San Francisco and the SFPS created a series of posters for the action to draw attention to the planned Trump budget cuts. Six distinct posters incorporated a wall that lined up between the different designs so that at the action the placards could be held up to make one continuous wall. The slogan on the posters was “Trump’s Agenda Privatization, Walling off America.”
At the action the wall was thrown down in a bit of street theater.
WRAP and Artwork

The ongoing use of artwork is an essential aspect of WRAP’s messaging. The use and purposes of artwork varies. A protest demands a clear unambiguous statement of purpose, but there are different forms of street actions that can use more humor, or subtle messaging. But WRAP also uses artwork informing and educating in conferences, public forums and through distribution throughout our network of members. The usefulness of artwork is that it can contain an important truth about the forces we are struggling against and it can give voice and presence to those of us who are so often voiceless and invisible.