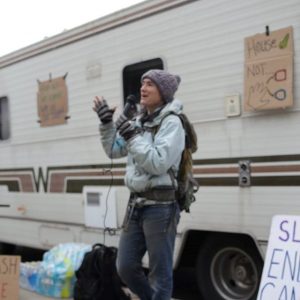 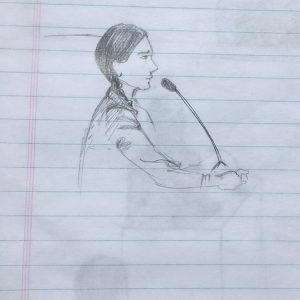 On August 24th 2017 at 8:30am Terese Howard will go to court to face a sentencing of 30 days in jail for the urban survival ban (otherwise known as “camping ban”). On April 5th 2017 Jerry Burton, Randy Russell, and Terese Howard were found guilty of surviving in public after a high profile 3 day trial with a jury that said things like “Why are we prosecuting people for being homeless?” and “I’ll bear a sense of guilt in prosecuting them,” and where the city prosecution said “you know it is illegal to survive in Denver.” For Terese, however, this was not the end of sentencing for this “crime” of lying in a sleeping bag as she was already on probation under a trespassing charge for sitting in a tiny home. In October 2015 members of Denver Homeless Out Loud and the broader homeless community took direct action to address the housing crisis and built five tiny homes in a day on this vacant Denver Housing Authority land which used to be low income housing and was just about to be sold to a private developer for market rate housing. But instead of responding with greattude that homeless people were taking care of their own housing needs the response was to arrest these people, including Terese, and destroy their homes. On November 28th 2016 when she got a ticket for the survival ban this was considered a violation of the probation condition of the trespassing charge of “no new law violations for a year.”

This case will be represented by the renown constitutional lawyer, David Lane, who has recently joined on as co-counsel in the class action lawsuit against the city for the homeless sweeps. If the city gets what they want Terese, a prominent organizer with DHOL fighting the cities injustices, will be in jail for 30 days after this hearing.