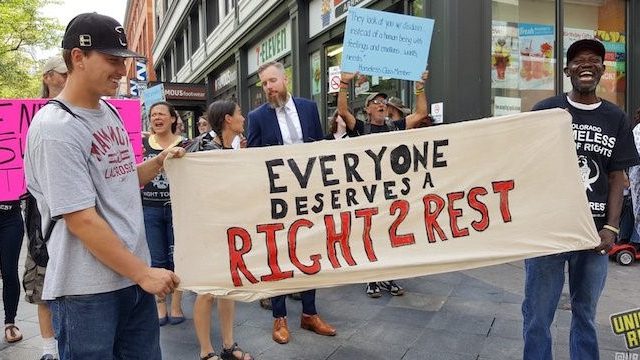 Denver, CO: In April of this year, WRAP Core Member Denver Homeless Outloud (DHOL) participated in the filing of one of the largest class actions of poor and dispossessed persons in US history fighting sweeps and stealing of people’s possessions. Last week lawyers in the landmark case, filed a Motion for Summary Judgment, which would end the case, finding in favor of The People. This motion was written because of the overwhelming evidence found in the discovery process that the city has had a practice and policy of violating homeless people’s 4th and 14th amendment rights when seizing their property without due process and discarding the property. Denver Parks Department Superintendent testified under oath that, “City officials decided not to store any property that was seized during the Arkins Court sweep on July 13, 2016, because in the past after sweeps no one had retrieved seized items.” A Denver Park Ranger testified to handing out “thousands” of notices for seizing property, none of whom retrieved that property. Homeless class members testified that “It was very cold and snowing on December 15, 2015 when they swept us” and how “they just want me to disappear.”

The Motion for Summary Judgment can be found here. The City of Denver also filed a motion for summary judgment claiming the evidence proves they did not violate anyone’s rights.

We do not know when the Judge will rule on these motions. Stay tuned…

Watch the action live on unicorn riot here or http://www.unicornriot.ninja/?p=18130