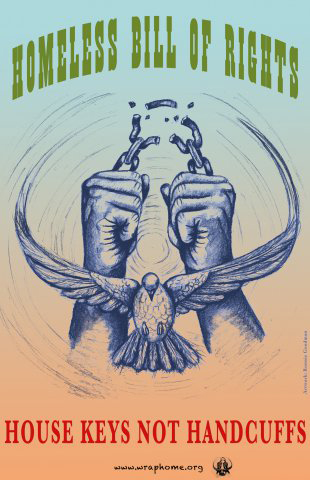 Denver, CO— On Wednesday April 19, 2017, the Colorado State Legislative Local Government Committee will be voting on the Right to Rest Act – HB 17-1314. This bill, sponsored by Representatives Salazar and Melton, would end the alarming trend of cities passing and enforcing laws that criminalize the basic civil rights of homeless individuals. The Right to Rest Act would, among other things, protect the rights of all people to move freely, rest, have privacy of one’s belonging, and eat in public space as well as protect their right to occupy a legally parked motor vehicle. The many laws across Colorado which infringe on these rights would be rendered null and void. This bill is about protecting all people’s human right to survive in public space and not be pushed “away” to nowhere.

This bill is being heard just two weeks after three people went on trial and were convicted for violation of Denver’s Unauthorized Urban Camping Ban -properly named Survival Ban – where the prosecution told defendant Randy Russell in cross examination, “You know it is illegal for you to survive in Denver.” This bill comes after a year of intensely escalated sweeps across Denver as well as sweeps in Pueblo, Colorado Springs, and many cities across Colorado. This bill comes after a lawsuit was filed and is under litigation against the city of Denver for the sweeps and seizure of property. This bill comes as housing prices are at an all time high in Denver and across the nation and government assistance for low-income housing has massively decreased. We cannot afford homes yet are criminalized for living homeless.

The Right to Rest Act (HB 17-1314) ends the criminalization of rest and accompanying violations of basic human and civil rights for all people.

This legislation protects the following rights and prohibits the enforcement of any local laws that violate these rights:

Wednesday April 19th rally at 12noon in front of the Capitol, hearing at 1:30pm in room 271. Survival while living without a home should never be deemed a crime.