In an unprecedented act of disrespect, the Right To Rest Act HB – 215 will not get a chance for a hearing in Oregon this year.

In spite of an unprecedented seven co-sponsors, Chairman of the House Judiciary Committee Representative Jeff Barker refused to schedule House Bill 2215 for a hearing in the assembly Judiciary Committee, prior to the deadline for a vote.

“We should not be criminalizing basic human activities like resting, giving citations to people who cannot afford to pay, and forcing them into the criminal justice system,” said Representative Carla Piluso. “It is inhumane and counterproductive.

Due to my decades of experience in law enforcement,” said Piluso. “I can say that this bill will not encourage illegal behavior. Rather, it allows police officers to use their scarce time and resources focusing on actual crimes, rather than criminalizing people who just need a place to exist.”

This is the first time any state legislative body refused to allow the Right To Rest Act to go before a committee for a full hearing of the issues and a vote of the members. The Right to Rest Act has been introduced three times in Colorado and California legislatures’ and twice in Oregon. The bill has a hearing scheduled in Colorado on April 19th.

Representative Barker’s decision to not hold a hearing, and allow a vote on HB 2215, is eerily reminiscent of local governments trying to make poor and homeless people disappear from sight in local communities.

“We documented the experiences of 565 houseless people with police and private security,” said Ibrahim Mubarak Director of Right 2 Survive. “The top three offenses were people being harassed, cited and/or arrested for sleeping, sitting and lying down. The reality is people sleeping, sitting and lying down are now crimes in Oregon. Our state legislators absolutely need to hear this”

Of course, in a time when the poor people are demonized for being poor and homeless people are increasingly seen more as something to fear rather than human beings, it’s unfortunately not all that surprising.

The Right to Rest Act seeks to end the criminalization of rest and accompanying violations of basic human and civil rights for all people. This legislation protects the following rights and prohibits the enforcement of any local laws that violate these rights:

With Oregon’s $1.6 billion budget deficit, and massive federal and state budget cuts to housing and human services being planned (Trump administration has called for 6.6 Billion in HUD budget alone), this legislation is more important than ever. At a time when our community can’t provide affordable housing, mental health services and stability for its own residents, the idea of criminalizing people that fall through the safety net seems cruel. And it is. It’s downright cruel.

The American Civil Liberties Union of Oregon (ACLU of Oregon) released a report on April 5, 2017 that reveals the widespread proliferation of city and county laws in Oregon that criminalize people experiencing homelessness. The report analyzed ordinances in 69 of Oregon’s most populous cities and 21 corresponding counties, and found 224 laws that restrict, criminalize, or punish people for performing life sustaining activities in a public space.

“This is not one city that has gone rogue,” said Kimberly McCullough, policy director at the ACLU of Oregon. “The trend towards criminalization is statewide, as is the housing crisis. As rents climb cities across Oregon are seeing huge increases in the number of residents experiencing homelessness. Oregon should focus on addressing the root causes of homelessness and poverty, but instead we’re seeing hundreds of laws that punish the homeless. Fines and criminal records only make it harder for people to secure stable housing.”

The ACLU of Oregon report finds: 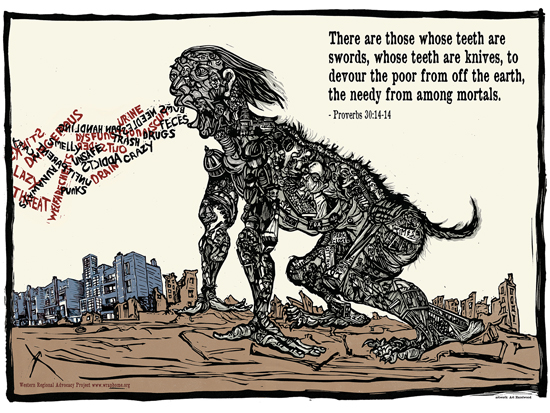 “People who live on the streets have to make difficult choices that have criminal implications, simply to go about their lives,” said Karissa Moden, with Sisters Of The Road. “They have to ask, Do I sleep in the park and violate the camping ban, or do I trespass onto private property? Where can I go to the bathroom? Where can I set my stuff down without attracting attention from police?”

The solution to homelessness is simple – it’s housing. Unfortunately, thousands of people remain without a safe place to call home in Oregon and therefore must conduct their survival activities in public space. We must work collectively to end the criminalization of homelessness and create the necessary affordable housing in our community.

“At the end of the day, The Right To Rest Act deserved a hearing,” said Paul Boden, director of the Western Regional Advocacy Project. “The practice of law enforcement targeting people experiencing homelessness has to be stopped. These laws have to become a part of the past. People’s lives are depending on it”

Rest, Not Arrest from Outside the Frame