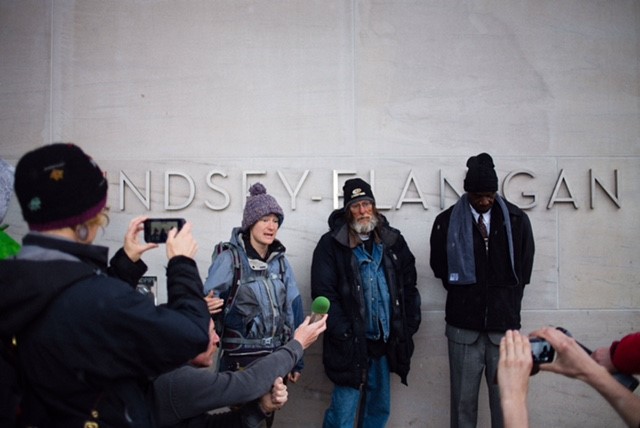 When: 9am- evening?
Where: Lindsey Flanigan Court House (502 Colfax Denver CO)
Today, April 4 2017, at the trial of Jerry Burton, Terese Howard, and Randy Russell for the Unauthorized Camping Ban (better known as Survival Ban), a jury was selected, five police officers testified, and the day closed out with testimony from a homeless women. Defense spoke of Woody Guthrie, asking the jury if this land was still made for you and me. Potential jurors spoke one after another of how they did not feel this law was just and that the government should not be prosecuting homeless people for sleeping. Police Officers testified to their job being to drive around waking up homeless people and to how they took Burton and Russell’s blankets and did not know where they went or how they survived the night without their blankets. Becky, who is homeless, testified to the struggle to find anywhere to rest without police telling her to move along.
The trial will continue Wednesday April 5th beginning at 9am and likely going through the day. We expect closing arguments in the late afternoon.
Contact:
Denver Homeless Out Loud
720-940-5291
info@denverhomelessoutloud.org