See more on our work together as Western Regional Advocacy Project in CA, OR and CO at wraphome.org 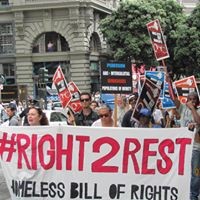 Fort Collins- Fort Collins’ City Council is considering a sit-lie ban, which they are calling the “Appropriate Use of Shared Public Space” ordinance. In other cities with similar ordinances, enforcement invariably targets people who are homeless, resulting in inhumane treatment and additional hardship. Ordinances like these are frequently used to pressure homeless people into moving out of downtown areas. This makes homeless people less visible downtown, while doing nothing to reduce the number of people who are homeless.

People living outside in Colorado Springs are experiencing massive coordinated camp sweeps for “clean up” over the last week. Thankfully, there haven’t been any citations that we know of, and people are able to take as much gear as they can carry. We had 13 volunteers show up with Blackbird Outreach to help folks move their camps. We even had a truck and a trailer. In all, over 100 people have been displaced in the last week. More camps have been posted this week.

We caught the local news filming at a much more trashed location than the massive 75-100 person camp displacement, but making it seem like that was the MLK camp. The video we created showing this has gotten over 10k views and has generated a lot of local discussion about how we unfairly portray people just trying to survive outside. https://www.facebook.com/coalitionforcompassionandaction/videos/366761720370486/

Council voted 5 to 4, with our City Manager casting the deciding vote, to NOT put in temporary toilets to address so-called campers defecating near Boulder  Creek. Once again they’ve chosen to pursue increased police enforcement, doubling down on that which continues to fail to solve either the problems that lead people to need to sleep outside or their ending up inevitably doing so.

Also the Homeless Working Group is setting targets of affordable housing not on a need basis. They say they don’t want to attract additional homeless people to Boulder. Their biggest concern is an entry system that gets people “into the system” where there is no exit to housing.

Thursday February 16th, 2017 there was a dispositive motions hearing in the Camping Ban criminal cases where homeless and poor people are being charged with crimes for sleeping on the streets with blankets and shelter in Winter. The hearing was noteworthy for the bias and prejudice shown toward Defendants by the Court.

The new trial date is set for April 5th 8am.
Read More
https://denverhomelessoutloud.org/2017/02/17/court-prerequisites-homeless-people-for-surviving-in-line-with-the-citys-efforts/