As U.S. cities struggle to address rising homelessness, they increasingly are turning to policies pushed by commercial-property owners that ban people from sitting or sleeping on sidewalks and begging for money.
Business improvement districts—groups of commercial property owners who pool their resources to revitalize their neighborhoods—have worked with some city councils to create and help enforce new laws targeting public conduct in busy commercial districts. In Denver, Berkeley, Calif., and Portland, Ore., for example, BIDs have campaigned to prohibit people from sitting or lying in public rights of way, and even sued to reverse policies that encouraged tent cities and homeless camps.

City lawmakers and officials who manage BIDs defend the arrangements, arguing the ordinances target discourteous or even dangerous conduct that prevents everyone from enjoying shared space. The homeless and their advocates say the policies amount to an effort to push the poor out of the sight of customers and tourists.

“To them this is about creating a shopping-mall environment,” said Paul Boden, executive director of the Western Regional Advocacy Project, a homeless-assistance nonprofit. “If you think about shopping malls, you don’t think about homeless people in the hallways.” 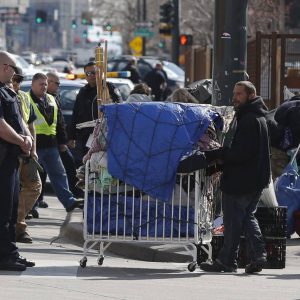 Police officers looked on as homeless people in March gathered their belongings as they leave a camp around a small park near the Denver Rescue Mission in downtown Denver. Photo: David Zalubowski/Associated Press

Business improvement districts formed in droves in the U.S. over the past three decades, usually by petition, as cities revitalized their downtowns, hoping to lure back businesses and customers who long ago fled to the suburbs. They typically spend their pooled funds on security, landscaping, cleaning and maintenance.
The growth of BIDs—at a rate of about 3% a year, experts estimate—coincided with a rise in ordinances that advocates say disproportionately affect the homeless. And many of the ordinances have passed in fast-growing cities with rising homeless populations, they said.
A 2015 study of 187 cities by the National Law Center on Homelessness and Poverty found that more than 60 cities had laws banning public camping and about 100 prohibited sitting or lying in public places—increases of 60% and 43%, respectively, since 2011.

Another 2015 survey by researchers at the Policy Advocacy Clinic at University of California, Berkeley, School of Law found California cities with more BIDs had a higher number of ordinances targeting conduct associated with homelessness.
“The more BIDs there are in a city, the more anti-homeless laws it has on the books,” the researchers found, according to a forthcoming report on the survey.
The head of the Downtown Berkeley Association, a BID, led a 2012 campaign to ban sitting on sidewalks in the city’s commercial districts. That campaign failed at the ballot box, but last year, the Berkeley City Council passed an ordinance regulating public camping that arose from proposal by the association, city and BID officials said.

The Portland Business Alliance has backed ordinances regulating the use of sidewalks, as well as state legislation that would prevent Oregon lawmakers from interfering with local sidewalk policies. Meanwhile, homeless advocates pushed for state legislation that would create a homeless Bill of Rights, including the right to rest, but the measure was narrowly defeated.

The Obama administration has taken a dim view of the trend. The Justice Department weighed in on the side of homeless people in Boise, Idaho, over sleeping and camping bans in an August 2015 brief filed in federal court. The brief argued that laws prohibiting people from sleeping outside even when shelters are full may violate the Eighth Amendment’s ban on cruel and unusual punishment.
Other groups are challenging such ordinances in court.

A federal lawsuit filed by nine homeless individuals in August accuses Denver officials of trying to “clear the city of ‘undesirables’ for purposes of economic development.”

A spokeswoman for Mayor Michael B. Hancock said Denver strives to be “as compassionate as possible” to the homeless, focusing its efforts on refer them to social services. “The city’s practice is to first try and connect people to services and treatment, and if that doesn’t work, people are given notice, usually multiple times, before any enforcement action is taken,” said Jenna Espinoza, the spokeswoman.

The nonprofit Downtown Denver Partnership manages the city’s BID, which comprises 420 property owners, and was formed in 1992 to maintain the city’s showpiece commercial strip downtown, the 16th Street Mall. The tree-lined pedestrian corridor features shops that include Gap and Banana Republic, as well as outdoor cafes, restaurants and renovated buildings.

For more than a decade, beginning in 2000, the Downtown Denver Partnership prodded the city to pass and enforce laws that restrict panhandling and prohibit sitting on sidewalks downtown in the daytime.

The Downtown Denver Partnership returned to city council with another request in 2012: a ban on unauthorized camping, making it illegal to use a sleeping bag or other covering to sleep in public. The ordinance passed by a vote of 9-4.

The BID’s involvement didn’t end with that vote. Staff for the Downtown Denver Partnership now regularly contact Denver police to intervene with men and women camped out in doorways, on steam grates and on sidewalks, according to emails provided by the police department in response to a public information request.

Gabriella Blanco, president of a Denver property-management company, reached out to the Downtown Denver Partnership in June for help. Homeless people were camped outside the downtown offices of one of her tenants, blocking the entrance.“This is happening all day and we kick them away and more show up. And they threaten people when asking them to leave,” Ms. Blanco wrote in a June email to the partnership’s Charlie Hunt, described on the BID’s website as its “eyes and ears” on the street.

About 45 minutes later, Mr. Hunt emailed Lt. Kevin Edling at the Denver Police Department about Ms. Blanco’s tenant.
Lt. Edling said he could help. “We have arrested around 12 parties in the last 6 days for failure to abide by a lawful order of a police officer; all of which were in violation of the City’s Sit & Lie ordinance,” he wrote in an email. “You have to call the police and report crime when you see it.”
The Denver Police Department works closely with outreach workers, who often help give the homeless information on shelters, day centers and other services, including help on getting them into permanent housing.

“Arresting people is not our objective, by any means,” said Sonny Jackson, a spokesman for the department. “As an agency, it is our objective to connect them with services.”

He added, “Homelessness is not a crime, and we don’t want to criminalize it. No matter what station in life you are in, you need to be treated with respect and dignity.”

But homeless advocates say that too often the proper services simply don’t exist, making the citations more punitive than helpful.
“People are asked to move on but there is nowhere to go,” said John Parvensky, president of the Colorado Coalition for the Homeless. The police just move “people along so they don’t violate the ordinance.”

Write to Joe Palazzolo at joe.palazzolo@wsj.com and Alejandro Lazo at alejandro.lazo@wsj.com
Originally post at: http://www.wsj.com/articles/cities-adopt-homeless-policies-pushed-by-downtown-business-interests-1476544016