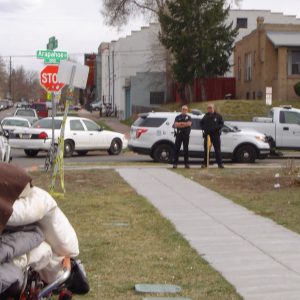 Denver, CO — Class action lawsuit was filed this morning by Attorney Jason Flores-Williams in the Federal District Court of Colorado on behalf of the thousands of homeless in Denver whose rights and dignity have been repeatedly violated by the City through its brutal policies—known as The Homeless Sweeps—of clearing this rapidly-growing city of the poor and displaced. The 36-page Complaint begins:

“Defendants have engaged in a systemic evisceration of thousands of displaced persons’ constitutional rights in order to clear the way for new housing and economic development in the Downtown Denver area. While gentrification may have positive benefits for a few, it is not a legal basis for treating this vulnerable class as though their civil rights were non-existent.”

The City has condoned the taking and destruction of homeless persons’ property—often all they have in the world—without due process or concern for their civil rights. These raids have been done in a way that can only be described as vindictive and inhumane, taking blankets and sleeping bags from people in 10 Degree weather with a foot of snow on the ground—so that along with violations of the Fourth and Fourteenth Amendment, Plaintiffs are bringing an Eighth Amendment claim against the City for cruel and unusual punishment.

With this Class Action, thousands of normally invisible people in this city are standing up and demanding access to justice.

Since Mayor Hancock has directed the sweeps across the city – taking people’s belongings, forcing people “away” into hiding, with no respect for rights and dignity, we at Denver Homeless Out Loud have continued to demand loud and clear that these sweeps must end. We have requested again and again to meet with the Mayor who has not even had the decency to reply. The Mayor has made it very clear he does not want to hear from those of us he is attempting to sweep out of sight, and we have made it very clear that we will be seen and heard – one way or another.

With this lawsuit we are demanding that our constitutional rights be heard and respected and that the sweeps end once and for all. This lawsuit stands for the rights of thousands of people surviving on the streets of Denver which are constantly being violated and will continue to be violated until we hold the city accountable to respect our rights.