In response to deep cuts to federal and state funding for affordable housing, California cities have enacted and enforced a wide range of local codes that target or disproportionately impact homeless people. These anti-homeless laws mimic vagrancy laws of past eras that targeted people of color (Jim Crow laws), migrants (anti-Okie laws) and the physically disabled (ugly laws).

In February 2015, our clinic released a report entitled California’s New Vagrancy Laws: The Growing Enactment and Enforcement of Anti-Homeless Laws in the Golden State. The study documented the increasing criminalization of homelessness in California, where more than 20 percent of the nation’s homeless people live.

In 2016, we analyzed municipal codes in the 58 most populous California cities and gathered updated arrest data from the FBI’s Uniform Crime Reporting (“UCR”) Program. A public update of the 2015 report is forthcoming, but we share our key 2016 findings here: (1) California cities continue to enact a high number of anti-homeless laws; (2) enforcement of anti-homeless laws continues to rise in spite of an improving economy; and (3) cities are increasingly arresting people for their homeless status, not their behavior.

1.- California cities continue to enact a high number of anti-homeless laws
In California’s 58 largest cities, we found 592 laws restricting life-sustaining activities of homeless people, or more than 10 anti-homeless laws per city. These laws include 781 separate restrictions prohibiting activities that homeless people have no choice but to undertake in public. Further, municipal laws that target or disproportionately impact homeless people have risen sharply in recent decades. 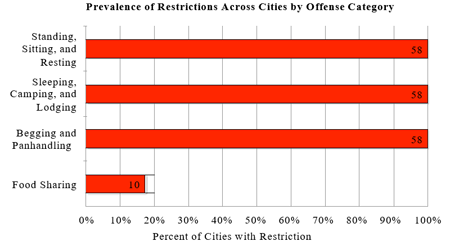 As shown in the adjacent chart, local laws are used to cite, arrest and jail homeless people in every city studied, both for daytime activities like standing, sitting or resting in public places and for nighttime activities like sleeping, camping or lodging in public places, including in vehicles. (A full list of the 58 cities and laws is attached, including 24 additional cities for which we have data.) 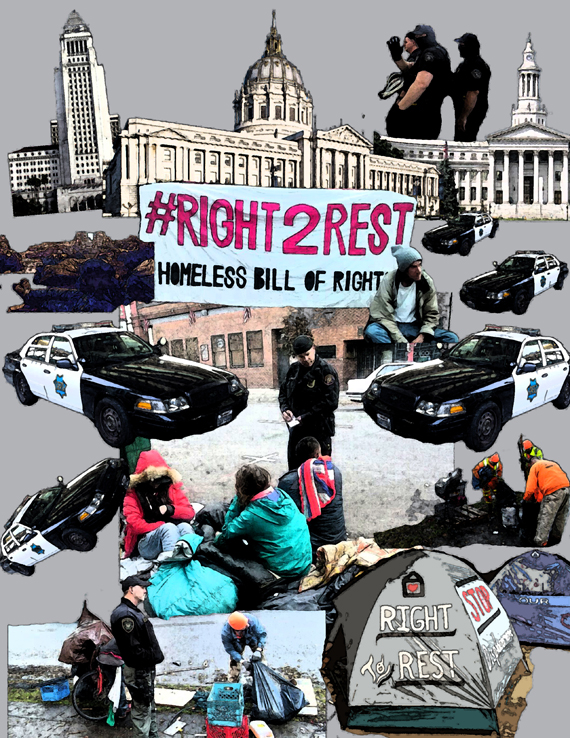