Today we are really happy to hear from WRAP Executive Director Paul Boden as he reflects on WRAP’s 10th anniversary.

How did WRAP get started?

When I was on the board of the National Coalition for the Homeless (NCH), a few other members from Chicago, New York, Atlanta, and I drafted a proposal for the NCH to establish regional offices across the country to build the organizing capacity for the organization. These offices would be staffed by local homeless groups.

The National Coalition voted not to accept this model, but in the process of developing the proposal I had talked to groups throughout the West Coast who really liked the idea of creating regional offices for building power. Whether it was part of a national effort or not, they wanted to create a regional organizing campaign. 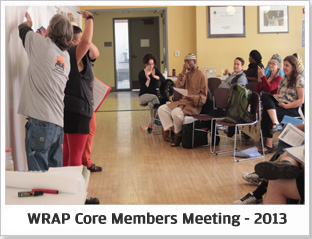 So that’s what we did. I stepped down as the director of the SF Coalition on Homelessness and with their full support we set about creating WRAP. We created a concept paper and passed it around in Los Angeles, Portland, Oakland, Berkeley and Seattle and held our first meeting in Berkeley in 2005 to formally incorporate WRAP.

Around the same time, the National Health Care for the Homeless Council (NHCHC) started a project to increase the involvement of “consumers” in the work of the NHCHC. As a consultant to that project I was traveling all over the country to meet with consumer advisory boards and the NHCHC graciously let that overlap with my going to West Coast communities and talking with potential WRAP member groups.

How did you find potential members?

They were the groups that folks I trusted told me were doing really kick-ass work in their communities. We had all heard of each other, though we may not have known each other yet. There are so many good groups out there. They don’t have the money to be on national boards and travel, but they’re doing accountable community organizing and it just made sense to regionalize our efforts and connect our work to each other.

We knew that we wanted WRAP to be different and create something new. We were successful in doing that. With street outreach, artwork and research, we’ve put together stuff that reflects, and is relevant to, the local organizing that people are doing. Our Without Housing Report has been downloaded more than 30,000 times and we are constantly hearing how it helps people’s local organizing. And now we have the Homeless Bill of Rights Campaign. When grassroot groups, and others really, are constantly calling and asking you to come present your research, artwork and campaigns, you know that you are relating to what people are doing in their communities. 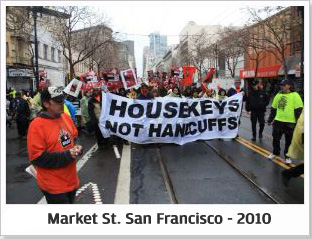 And the WRAP groups are all a little different. Some are straight up in the streets, some are doing food justice, some are doing media work. But all are dealing with devastating gentrification, the loss of housing and growing criminalization. WRAP members all agreed housing and criminalization are the two biggest issues for poor people and people without housing. So we knew that these are the two common areas we all should fight together on.

What are you most proud of WRAP accomplishing?

Besides still being here ten years later? That’s definitely something.
I think continuing use of our Without Housing report (first released in 2006), our artwork and the great local efforts it has helped to support. And the growth of our Homeless Bill of Rights Campaign and all that has come out of that, all the street outreach, and the involvement of law schools that are researching these laws and how they are growing. It’s not a one or the other; both Without Housing and the Homeless Bill of Rights Campaign are related to each other – collectively they are two prongs of one Human Rights Campaign that is the core of why WRAP exists.

If any of us had tried to do this on our own it would not work. It took the cumulative skills of a bunch of organizations and it all came from our street outreach. Even though Without Housing was research based, we even did street outreach on that.
If you’re gonna say “this is what we know,” then you better have conversations with homeless and poor community members to validate just who “we” is.

What impact does WRAP have? 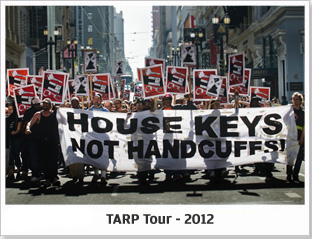 We are really accountable to our members and our members are really accountable to their local communities. All of our activities can be traced back to the local level and all of WRAP’s decisions are made by the core membership. We’re kind of unique that way. I wish we weren’t, but we are. When people see how we do our shit, they really respond to it. I often hear “the way WRAP operates is really different.” WRAP has a strong message and platform.

How well we take advantage of that is something we are constantly working on.

What are you looking forward to over the next 10 years?

I think it’s important that at the end of our first ten years we stop and talk to the members and see what’s working and what may not be working too well. I also think as you get into your second set of ten, you should have your foundation set. You should be able to start growing. And I don’t know what that looks like or how we’re going to choose to do it, but you can’t stay ten years old forever. We might hook in with broader based groups or help start up groups. One thing I know is we’ll make the decisions together. I’m sure we’ll see a broader base of core members and a broader context and continue to amplify the issues that aren’t typically seen as homeless issues, like race and class and ableism. We know these issues are what made homelessness happen in the first place and they continue to perpetuate it 32 years later.

We are always learning. With Without Housing, we researched and talked about what was happening and learned what neoliberalism is. It’s like you want to learn one new thing a day and then you need to implement a solution. Groups are learning to not do silo organizing. And that’s also where we need to keep growing. And I hope we will continue to put resources toward a national civil rights movement. 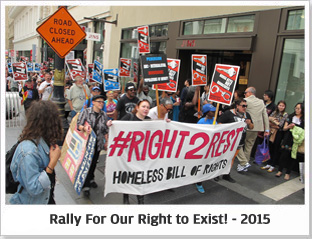 There have been groups working to fight all of the criminalization, but no one has committed their time to bringing everyone together. That is starting to happen now and WRAP’s street outreach, artwork, direct actions and research play a significant role.

How we make decisions is really important to us. We’ve got to continue to make them our way. Every decision has to reflect what the street outreach tells us. It has to. We now have over 1500 street outreach interviews from across the country; those can never become wasted conversations!

Anything else you want to say about WRAP’s 10 years?

When we were putting this project together, I wrote a budget for $300,000. I thought for sure that our system of accountability and the dedication of our core members would bring big time foundation support. But it’s been a lot harder then I thought it would be. I know I shouldn’t be surprised at how little foundation support WRAP has been able to generate. There’s something about how we do our organizing that scares most of them. They seem to say, “You want to empower groups that do local organizing? That’s not what we’re into.” The few Foundations that support us are into social justice and social change. But I’m incredibly proud that we’ve been able to sustain ourselves with overwhelming support from the public and the dedication of our members.

Thank you to Paul and we thank each of you who supports WRAP in all the ways that you do. Here’s to a 2016 that sees WRAP and all of our organizations thrive and grow stronger. Here’s to people power! 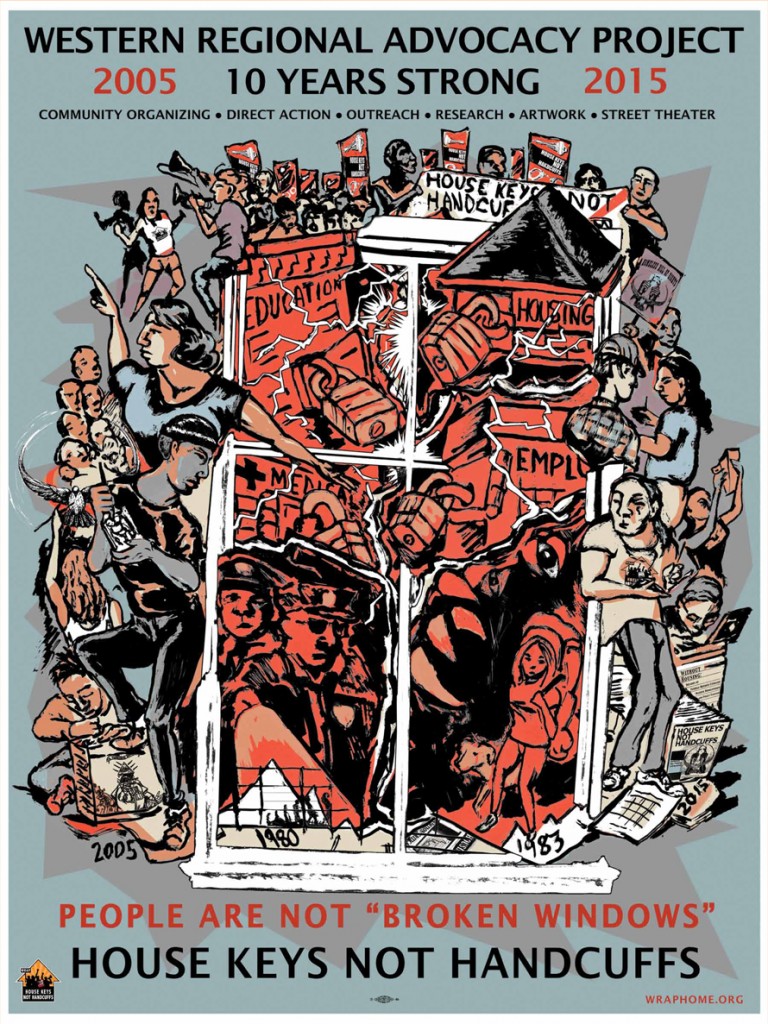