Shall the voters of the City and County of Denver adopt a measure that secures and enforces basic rights for all people within the jurisdiction of the City and County of Denver, including the right to rest and shelter oneself from the elements in a non-obstructive manner in outdoor public spaces; to eat, share accept or give free food in any public space where food is not prohibited; to occupy one’s own legally parked motor vehicle, or occupy a legally parked motor vehicle belonging to another, with the owner’s permission; and to have a right and expectation of privacy and safety of or in one’s person and property? 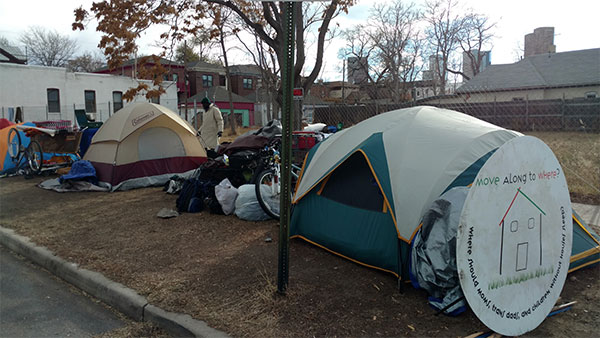 What is the Right To Rest ?

Denver Homeless Out Loud (DHOL) is the Western Regional Advocacy Project (WRAP) member leading the Right to Rest Campaign in Colorado. Through WRAP, California, Oregon, and Colorado are working together in a broader Homeless Bill of Rights Campaign to end the criminalization of homelessness and build a movement that exposes and eliminates the root causes of civil and human rights abuses of people experiencing poverty and homelessness in our communities.

All across Colorado, and the country, people are being criminalized and pushed “away” for performing basic acts of survival like sleeping, sitting, sleeping in your vehicle, and having belongings in public space. Our Homeless Bill of Rights Campaign in Colorado will create bills that protect the following rights and prohibit the enforcement of any local laws that violate these rights:

The core of our HBR campaign is based on our outreach to homeless people across Colorado. To learn more about what our survey research revealed, visit our Colorado Situation page.

In April of 2014 members of Denver Homeless Out Loud hit the streets with questionnaires to document homeless people’s experiences with police and private security, shelters, and basic survival on the streets. Soon after groups in Fort Collins, Grand Junction, Boulder, Colorado Springs and other cities/towns through Colorado join on and started gathering these same questionnaires on the streets in those cities. In November 2014 we examined the findings and determined the rights which would be in the Right to Rest Act based on the activities people were being negatively impacted by the most and which are acts of survival which all people must do. Through street outreach in Colorado, we came to the same core rights as California and Oregon came to through street outreach.

At this time we in Colorado joined Western Regional Advocacy Project (WRAP)! Together with WRAP, we wrote the Right to Rest Act.

In December 2014 Representatives Joe Salazar and Jovan Melton agreed to take the lead in sponsoring the Right to Rest Act HB 1264 in the Colorado State Legislator! And on April 15 and 27 2015 the Right to Rest Act was heard in the State Veterans and Military Affairs Committee. Testimony was given by people criminalized for surviving in public space, faith leaders, lawyers, and others sharing the need to pass this bill and protect our rights. Business representatives, city lobbyists, and others said this bill must not pass because they did not want to see homeless people sleeping by their business, because they did not want lawsuits, and because they believe the laws against resting in public help police connect homeless people to services. The committee members voted with the business and anti-homeless interests and voted down the bill on an 8-3 vote.

After HB 1264 was voted down in committee we got right back to work gathering more questionnaires on the streets, doing research and presenting with the campaign all over the state. In January 2016 our Right to Rest Act published again: this year as HB 1191. In February 2016 DU Sturm College of Law presented the report we worked with them to produce called Too High a Price: the Criminalization of Homelessness in Colorado.

On February 24, 2016, the Right to Rest Act HB 1191 was heard in the Local Affairs committee. The hearing went for over 8 hours with testimonies from over 30 people calling for the Right to Rest and a handful of business representatives, local government lobbyists, and police calling for the continued criminalization of homeless and poor people. In the late night when the bill went to vote the committee voted 5-6 against the right to rest. We were one vote short of passing this committee.

Watch Livestream of the last 20 min of the hearing here https://www.youtube.com/watch?v=wsh2kOxzeVY

The day after HB 1191 was voted down we got right back to work speaking out, documenting, gathering input, and organizing for our rights. After the massive increase in police harassment and sweeps in Denver since March of 2016, our work and resolve have gotten that much stronger to bring the Right to Rest Act to Colorado. Together with Representatives Salazar and Melton, we are reaped up and ready to bring the Right to Rest Act back to the capitol again in 2017… May this be the year where our basic rights to survive our respected in the law… We will continue to stand strong and press on until our rights are respected.

Watch Live Stream by Unicorn Riot of most of the 2017 hearing here https://livestream.com/unicornriot/events/7291299

see more at the Denver Homeless Out Loud Gallery