The federal government played a major role in creating homelessness by cutting tens of billions of dollars from affordable housing programs beginning in the early 1980s. Relying on the market to deliver affordable housing has only worsened the problem.

Since then, every federal plan to address homelessness has primarily focused on “fixing” homeless people rather than the broken housing system. This approach – part of the broader war against the poor ushered in by Reagan – has institutionalized a vicious cycle of homeless policy. As a result, millions of people live without housing in the U.S. every year — including well over a million children. 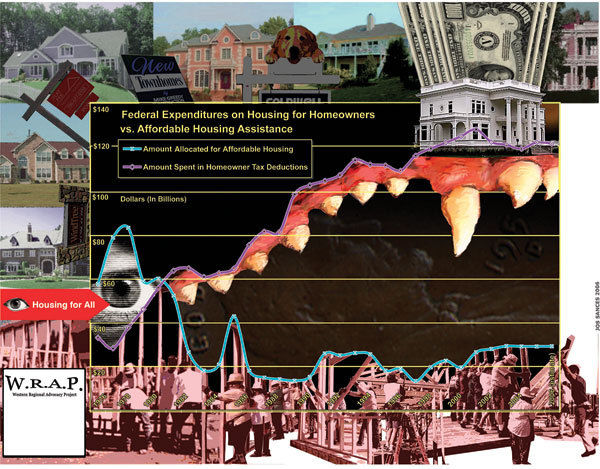 WRAP’s housing campaign attempts to reverse this trend by unifying communities under the simple premise that every person deserves a safe place to call home. Our first step was to reframe the national debate on homelessness, affordable housing, and governmental funding priorities by publishing Without Housing: Decades of Federal Housing Cutbacks, Massive Homelessness and Policy Failures.

We then launched a mass public education campaign, building relationships with thousands of people across the country. Having laid this groundwork, we’re now organizing around these demands to win federal reinvestment in affordable housing programs.

Give us a call if you are interested in learning more 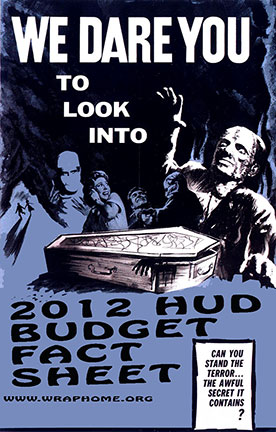 Check out the facts in our 2012 HUD Budget Fact Sheet about what has been playing out over the years.

(Impact of the 2013 Sequester on Housing and Homeless Services)

See our Without Housing Report for more details about how these massive cuts are the cause of, and continue to perpetuate homelessness in our communities.

If you want to connect with organizing in your community and/or want to join forces with WRAP.