Walter Shoaf tried to keep his belongings with him whenever he could. As a homeless veteran living in Skid Row, he had nowhere to safely store them. In February 2014, however, the 62-year-old had to briefly leave his shelter and possessions at his spot on the sidewalk while he ran a short errand. When he came back, employees of the Los Angeles Downtown Industrial District Business Improvement District (BID) were loading all of his belongings into the back of their truck–including his military ID card, medication, and the tent he used as shelter. The BID employees refused to return his belongings and gave him no information on how to get them back.

Every day, BIDs across US cities violate homeless peoples’ rights in similar fashion. BIDs use public funds to hire private security agencies who work in tandem with police bureaus and the courts to carry out one core function: removing visible signs of poverty in order to maintain and extend private property rights in public space. 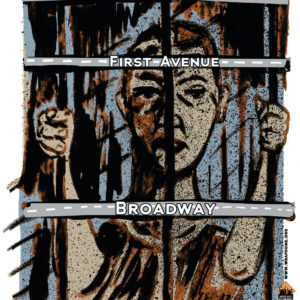 BIDs are particular areas, spanning a few to several hundred blocks, in which all property owners pay a special tax or fee to the city, which then turns funds over a private corporation or nonprofit that manages the BID. There are at least 1,200 BIDs across the country, accounting for miles and miles of space in US cities. BIDs go by various names, such as Community Benefit Districts (CBDs), Green Benefit Districts (GBDs), and Enhanced Service Districts (ESDs), with new ones forming each year. Regardless of what they are called, BIDs are funded using public resources, are undemocratically controlled by the area’s largest property owners, and receive shockingly little oversight by local governments. Most egregiously, BIDs are a driving force behind the privatization and white washing of public space. To defend private property rights, BIDs funnel millions of dollars of public money into private security programs. They also enable corporate actors to collaborate with public agencies to increase police presence and bolster the court systems, with grave impacts on poor and homeless people. And they lobby for discriminatory laws that criminalize poverty. Such policing practices are the focus of this article.

BIDs Protect Property, Not People: Corporations and property owners benefit enormously from the “quality of life” ordinances that police and private security officers use to criminalize people for carrying out basic acts of survival, such as sleeping, eating, and sitting. In a recent survey of 1,527 homeless people across eight states, WRAP found that 82% had been harassed by police for sleeping, 77% for lying down, and 75% for loitering. Only 26% knew of a safe and legal place to sleep outside. These are the kinds of activities that BID policing targets. Fundamentally, the policing that BIDs enable and intensify is part of the ongoing legacy of white supremacy and classism in the United States, whereby laws are created to keep specific groups of people out of public space and public consciousness in order to protect private property and those who own it. People who were historically targeted by policies like Jim Crow, Sundown towns, Anti-Okie Laws, Operation Wetback, and Ugly Laws are still disproportionately harmed by laws on the books in 2021. Housing (in)justice is therefore deeply intersectional: anti-homeless, anti-poor laws today magnify the ways that oppression continues to be stratified along lines of race, class, ethnicity, immigration status, and disability. 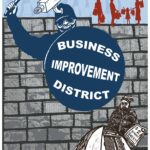 BIDs Fund Private Security, Additional Police: How do BIDs carry out such oppressive policing? In many cases, BIDs spend over half of their overall revenue on private security and policing. BIDs may call the staff of their private security programs “ambassadors,” “service representatives,” or “officers,” but they are effectively the same as the police: security officers sometimes carry firearms, and often wear uniforms similar to those of police, have a direct line of contact with law enforcement agencies, and function as the “eyes and ears” of local police. This surveillance often includes shared radio frequencies used by BID security and police to communicate. In particularly blatant examples, BIDs actually hire additional police officers directly from local police departments to patrol their districts. For example:
• In Sacramento, the North Franklin Property BID lobbied the Sacramento Police Department to add an additional beat within its boundaries.
• In San Francisco, the Union Square BID lobbied for the Union Square Ambassador Program, which committed $350,000 from the San Francisco general fund to pay seven retired cops to patrol Union Square.
These hired police officers are armed, uniformed, and authorized to make arrests and use force as usual—but report to and take direction directly from BID leadership. It can be hard to spot the difference between private security and actual police in many cities. Visually and functionally, private security and police are nearly the same, since BID security is overwhelmingly structured to assist local police departments in targeting so-called quality of life offenses: panhandling, sitting, laying down, eating, and other survival activities that homeless people, by definition, must undertake in public space.

BIDs Fund “Cleaning” and Courts: To make things even more complicated, BID private security budgets are often bundled together with budgets for cleaning and maintenance programs, under program names like “Clean & Safe”. Like the euphemisms used for their private security forces, the names of BID programs are inherently deceptive. Who wouldn’t want their community to be cleaner and safer? While on the surface it would seem that the money is going towards things like street cleaning or tree trimming, unhoused community members know that cleaning and maintenance crews share the same core function as private security. In city after city, cleaning crews regularly perform “sweeps” — evictions — that destroy personal property and displace individuals and communities, like Walter Shoaf and his neighbors. If someone does not comply with an eviction, cleaning crews often immediately call BID security or police to the scene. Clean-up postings, which are usually nailed to telephone poles by so-called safety ambassadors and cleanup crews, therefore basically act as simultaneously “judge, jury, and executioner” for visibly poor and disproportionately non-white people living in public space. 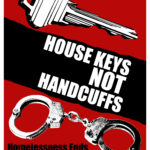 Quality of life policing generates an enormous amount of arrests and citations—often too many for regular courts to actually process. BIDs have stepped up to fill this gap in the carceral system by funding courts, prosecutors, and even community service programs that are explicitly focused on “crimes” of survival. BIDs, in other words, not only directly fund the expansion of street-level policing, but they also further privatize the carceral system. In Portland for example, you can be arrested by police under contract with the Clean & Safe ESD, and until recently face charges from a prosecutor partially funded by the Clean & Safe ESD who operates in a court partially funded by Clean & Safe ESD, and then be sentenced to a community service program run by the Clean & Safe ESD. A 2020 audit of Portland’s BIDs reveals that such activities operated for years with nearly NO oversight.

In sum, to carry out the oppressive policing that protects white supremacist, classist private property rights, BIDs use public funds to hire private security guards and additional police, who collaborate with the court system to police public space and those who inhabit it—with grave consequences for those who have no other choice but to carry out basic survival activities on the streets.

BIDs Lobby for Ever More Laws Protecting Private Property: BIDs are not content with just intensifying the enforcement of existing laws. There are countless examples of BIDs using their political influence to push new policies that further criminalize homelessness and to attack those seeking to roll back such criminalization. The Downtown Denver Partnership BID, for example, led a successful lobbying effort to pass a camping ban that criminalized the act of sleeping outdoors in Denver—and then spent $200,000 against a campaign to overturn the ban. The California Downtown Association, which includes many California BIDs, recently lobbied to defeat the Right to Rest Act and the Homeless Person’s Bill of Rights. In Sacramento, the Greater Broadway Partnership BID collaborated with the City of Sacramento to file a civil lawsuit that would permanently ban seven homeless individuals from the BID. And when a new law or policy proves effective, it often travels quickly within and between cities, as BIDs are in regular communication with each other via a network organized by the International Downtown Association and through other channels. Such networks enable BIDs to flex their economic power on local, state, and national scales. 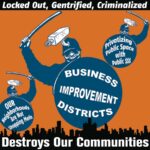 Dismantling BIDs, Abolishing Police and Prisons: Dismantling the structures that enable the expanded policing and criminalization of poor and homeless people is particularly urgent in this moment of Black¬‐led demands to defund and abolish police and Indigenous calls for Land Back. Given racist, colonial origins of policing that continues to defend private property above all, it is crucial to ensure that private policing does not become even more of a go-to solution as cities divest from their police departments. For instance, following a small cut to San Francisco’s police budget in 2020, the city awarded a huge grant to the Castro BID for additional security—which now works hand in hand with local public works and police departments to carry out sweeps. It is vital that advocates work together to dismantle BIDs and other privatized policing structures alongside police bureaus, prisons, and other carceral systems. Understanding the structure and function of BIDs, and the impacts of their policing practices on people living in public space, is one important first step.