“DON’T TAKE OUR TENTS!”: HOUSING JUSTICE ADVOCATES WILL HOLD A “VIGIL FOR THE STREETS” AT MEDFORD CITY HALL THIS THURSDAY 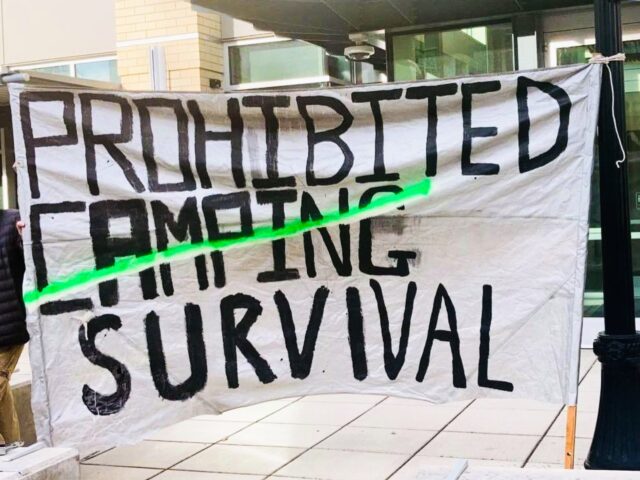 “DON’T TAKE OUR TENTS!”: HOUSING JUSTICE ADVOCATES WILL HOLD A “VIGIL FOR THE STREETS” AT MEDFORD CITY HALL THIS THURSDAY

What: Don’t Take Our Tents! Vigil for the Streets

[Medford, OR] – The Housing Justice Alliance will hold a public vigil on Thursday, April 1st at 5PM to honor people who have died without shelter and show opposition to Medford’s proposed “Prohibited Camping Ordinance,” which would make it a criminal misdemeanor for people to use tents for shelter. The Medford City Council will vote on the ordinance during their 6PM meeting. The public will not be allowed into the meeting due to COVID restriction, so the Housing Justice Alliance will stream the meeting outside.

“We are gathering before the city council meeting because we want our local officials to understand the weight of their decisions. We want them to hear people’s voices and see the faces of those that their vote will impact,” said Emily Mann from the Housing Justice Alliance. “Many of us have lost friends on the streets to exposure and other hardships. If the City of Medford makes it a jailable offense to use a tent, we will likely lose more people in the coming winters.”

The Medford City Council will vote on an updated version of the “Prohibited Camping Ordinance” that will still add criminal penalties for using a tent or lying down in public — up to 30 days and jail and a $500 fine. Housing justice advocates point out that this will only exacerbate Medford’s housing crisis, making it even harder for people to survive through extreme weather and access services.

In a letter to the City Council, 68-year-old houseless Medford resident Jenny said, “Without this tent, friends by the river, I would have died in a doorway. Who would care? Don’t take our only shelter.”

The Housing Justice Alliance launched a petition in March urging Medford’s City Council to reject the ordinance and listen to unhoused people and their allies to address the root causes of homelessness and poverty in the Rogue Valley. As of March 30, over 2,600 people have signed a petition opposing the proposed ordinance, including 550 Medford residents, at least 50 of whom are currently unhoused. Over 600 people signed from neighboring towns in Jackson County. 24 local organizations and businesses have also endorsed the petition in opposition to the proposed ordinance. [Petition link: https://tinyurl.com/MedfordPetition]

Many of the endorsing organizations have been on the frontlines of providing fire relief to impacted communities in the aftermath of last summer’s fires. Rogue Climate and the Rogue Action Center have been operating a fire relief station in Phoenix since losing their office to the Almeda fire in September. In a letter, Rogue Climate said “Putting more people in jail, giving them a criminal record, saddling them with more debt, and exposing them to more trauma will make it even harder for folks to get back on their feet. The City of Medford should be working with community groups to address the root causes of the housing crisis more effectively and on a larger scale.”

Thursday’s vigil will include art, a memorial altar, and speakers sharing their experiences of living unhoused in Medford. More information about the event can be found on Facebook at https://www.facebook.com/events/805588726732275

Filed under: #right2rest, #StopTheSweeps, Press Releases by Jonathan
No Comments »