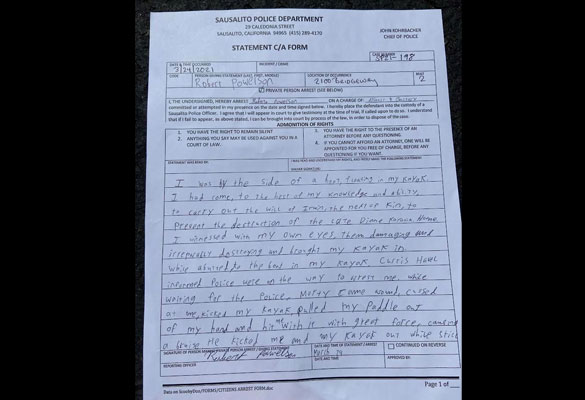 “Get the fuck off the boat” yells Army Corps Engineer supervisor in a video captured showing a supervisor of the Army Corps of Engineers hitting me with my own paddle while I was sitting in my kayak.

Protesters will be gathering Today, Thursday March 25 at 12pm at 2100 Bridgeway, at the front gate of the Army Corps Engineers, to demand the firing of the attacker.

I have filed a police complaint against, Marty has  filed against him for the attack and the Sausalito Police Department has opened an investigation. See attached Statement Form.

The assault was spurred when I interceded to stop the boat from being destroyed. The Harbormaster of the Richardson Bay Regional Agency was destroying the home of the deceased Diane Moyer who died on Sunday, whose late husband  was the famed photographer Larry Moyer. The next of kin was in the process of releasing the boat to beloved friends. By pulling up the boat the ramp, he was irreparably damaging the boat due to the process of how barges are, according to Louis Tenwinkle who has worked on Diane’s boat many times to fix the hull: https://www.facebook.com/100001405833876/d=n 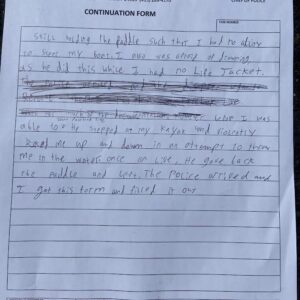 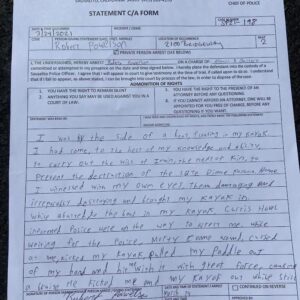 It is the latest chapter of the battle for Richardson Bay as the eviction being led by the Bay Conservation of Development Commission to evict over a hundred liveaboard mariners from the Rainbow Bay Anchor-Out Community in the next five years.

Filed under: Press Releases, Stop the Sweeps by Jonathan
No Comments »