Yesterday, over 60 police officers descended on the small camp at 29th and Welton, after the day before telling residents they would get a 7 day written notice. These police came under the direction of Mayor Hancock who has instructed police to start enforcing the Camping (aka Survival) Ban again starting August 7th 2020. About 15 police officers showed up at the camp before 8:30am, just to remove 4 people from their tents. After community members started seeing our DHOL livestream and showing up to stand against this eviction of these residents, swarms of additional police were called on sean – leading to about 60 police being present all day. How much did the city spend on police in this one small sweep?? Likely enough to house these 4 residents for at least a month or more… 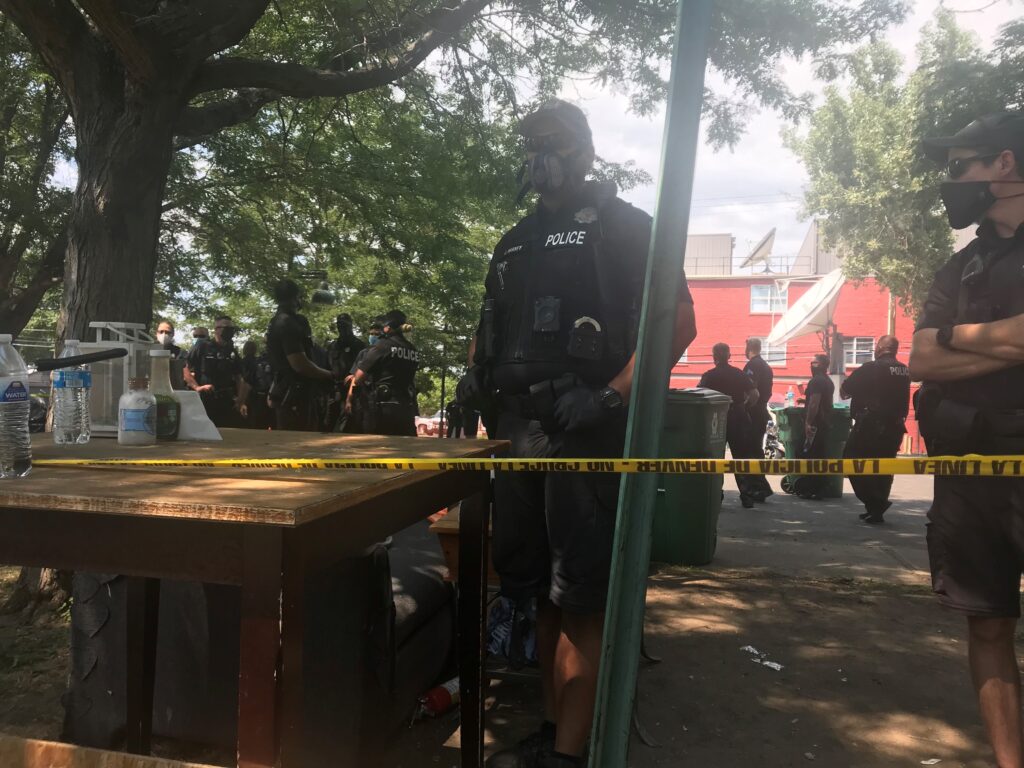 One resident of this camp, Tiley, had just gotten approved for housing through a federal voucher and her own efforts working through the process. She is on track to move into this housing on Saturday, but police would not give her the 4 days until that housing comes through to simply stay in her tent and not be displaced. She was given a hotel until her housing is finalized…but was it really necessary to put her through all this trama right before she moves into housing? Throughout the morning Tiley cried from the trama and body pain as police would not let community members help her pack. She said again and again how grateful she was to the community for showing up to support. 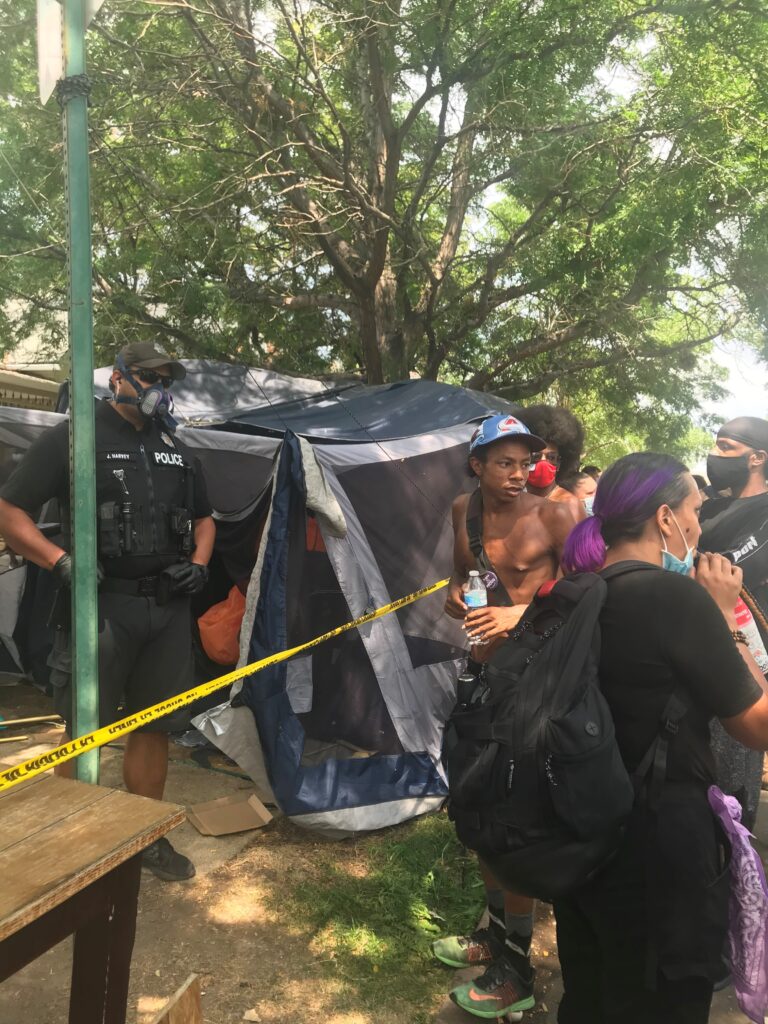 The other residents of the camp who did not have any housing to move to, locked themselves in Vince’s tent together and informed the police they would not be moving until they were offered real permanent housing. They received written warnings for the Survival Ban as they stood their ground knowing if they moved from there they would just be moving to a new spot to break the Survival Ban law somewhere else. They called out from the tent saying again and again, “If you can’t give us housing we are not moving.” With much aggressive police action and stress, Vince ended up having a health crisis in his heart and body that forced him to leave in an ambulance. The other couple who lives there went with him to the hospital. 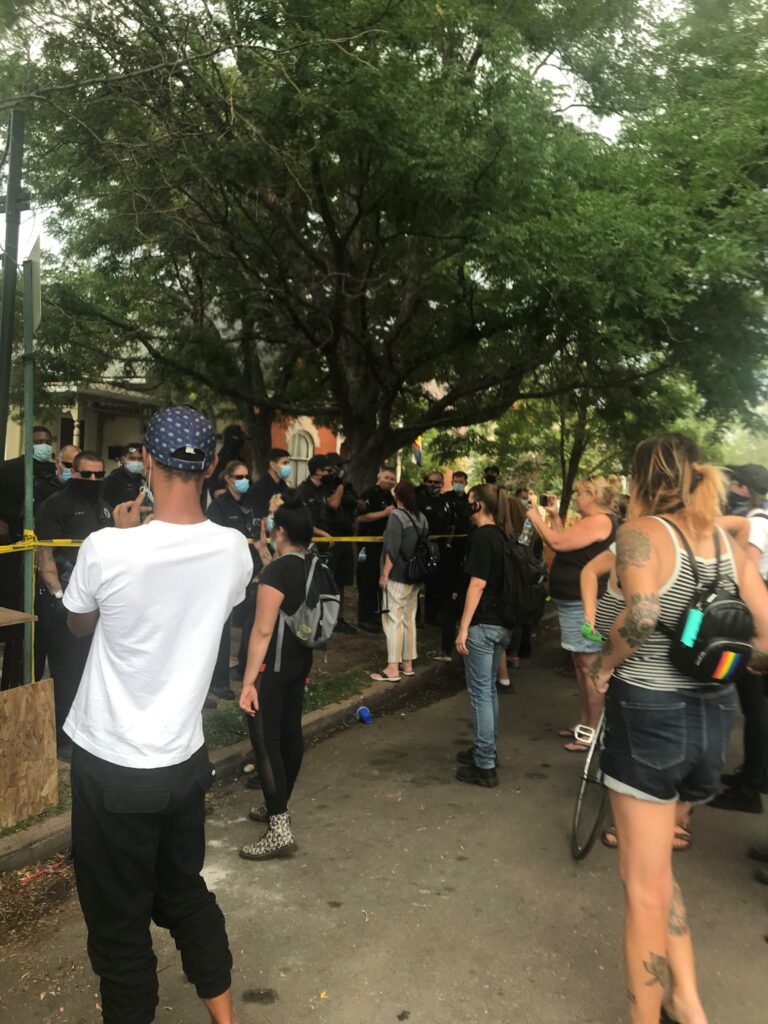 While Vince was at the hospital, community members tried to defend his tent from being taken by standing around it and holding onto it, but masses of police pushed people back and pulled his tent down and took it.

Then police left out of the blew around 3:30pm after a full day of presence. However, only minutes later, police came swarming back to arrest a young man and began beating people with clubs, spraying pepper spray, using rumer bullets, and pushing people to the ground.

This sort of massive police presence and violence is uncalled for. Sending 60 police to evict 4 people from their tents is traumatizing, criminalizing, and a waste of city resources that could be used for housing. This is NOT OK.

Next week, on August 25th and 26th the city is planning to sweep the blocks along 22nd, Stout, Champa, and Curtis. There are roughly 150 people or more who live on these blocks. Scattering them to some other block is only going to perpetuate this endless cycle of trauma, wasted resources, loss of property, and endless other harmful effects. Is the city yet again going to send masses of police to tell people their survival is a crime??