Denver, CO– Today, Wednesday July 29th 2020, Governor Polis and Mayor Hancock ordered a mass sweep of Lincoln Park where 154 tents, about 200 people without housing, have been living for the past couple of months. The sweep was planned secretly by the City and State. State and City officials know the plan at least days ago and intentionally did not tell residents of the encampment, council people, or community organizers. If they were doing something good for the community, would they not want to make that public?? Instead only a handful of residents were even told verbally the day before that this might happen and most residents received no warrening until waking up in the morning to 100 riot cops at their tent. This is a direct violation of the agreement the city made in the recent class action lawsuit to give 7 days notice before sweeps. 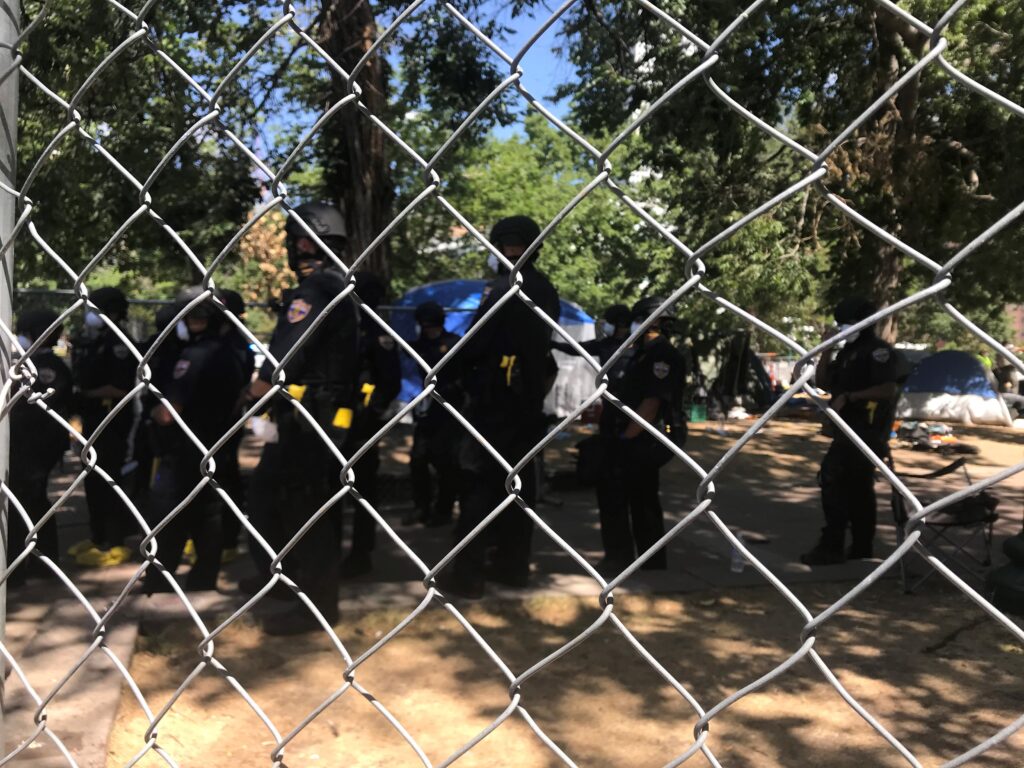 Instead of storing people’s property, as is required by law, a bulldozer was used to indiscriminately scoop up and dump countless tents full of people’s property. Anyone who was not present, as they received no warning this was happening, lost all their property today. Furthermore, by about 10am State Troopers closed the fence they had put around the park and refused to let residents of the encampment who were coming back to their tent after being gone for the morning or night (some due to work that keeps they out) were blocked from going into the park to get their property. Multiple residents showed up and told Troopers they had their wallet and ID in the camp and even so Troopers would not let them in saying “they should have gotten here sooner.”

For a while community members protesting the sweep held the gate open to enable residents to go in and retrieve their property. But then State Troopers suddenly rushed the crowd, pushing people over, grabbing two women’s breasts (including a 13 year old girl), arresting one woman for no reason, and sending Elected Education Board member, Tay Anderson to the hospital.

State Troopers and Police also injured one man’s arm to the point of massive bleeding when handcuffing and arresting him while standing in the way of a bulldozer trashing people’s property.

Many residents of this encampment are newly homeless after losing jobs or housing due to COVID. These people are totally at a loss for where to go or what to do. They do not feel safe at a shelter and are currently scattered around our city looking for somewhere to be.

Yesterday and today the City sent a massive bus to the park all day to take people to the shelter. This is at the very time as the National Western Men’s shelter is being shut down, the Women are being moved from the Coliseum shelter, and over all there is a reduction in bed spaces at these shelters. The bus driver informed us that he had taken one man to the shelter yesterday, and that man did not actually even want to go there – he simply took the ride to get away from the police and did not plan on staying at the shelter. So not one of the 200 plus residents of this encampment felt a mass shelter with hundreds of other people was a viable option for them.

Residents of this encampment were not offered housing or even hotel rooms by the city. The SOS site for a designated camp area is not even opened up yet. The only answer to the question of “move along to where” the city would give is, on a bus to mass congregate shelters. This is not an answer.

We cannot let the State or the City get away with this kind of destruction and injustice. They have violated the communities rights and left hundreds of people with no property and nowhere to survive. 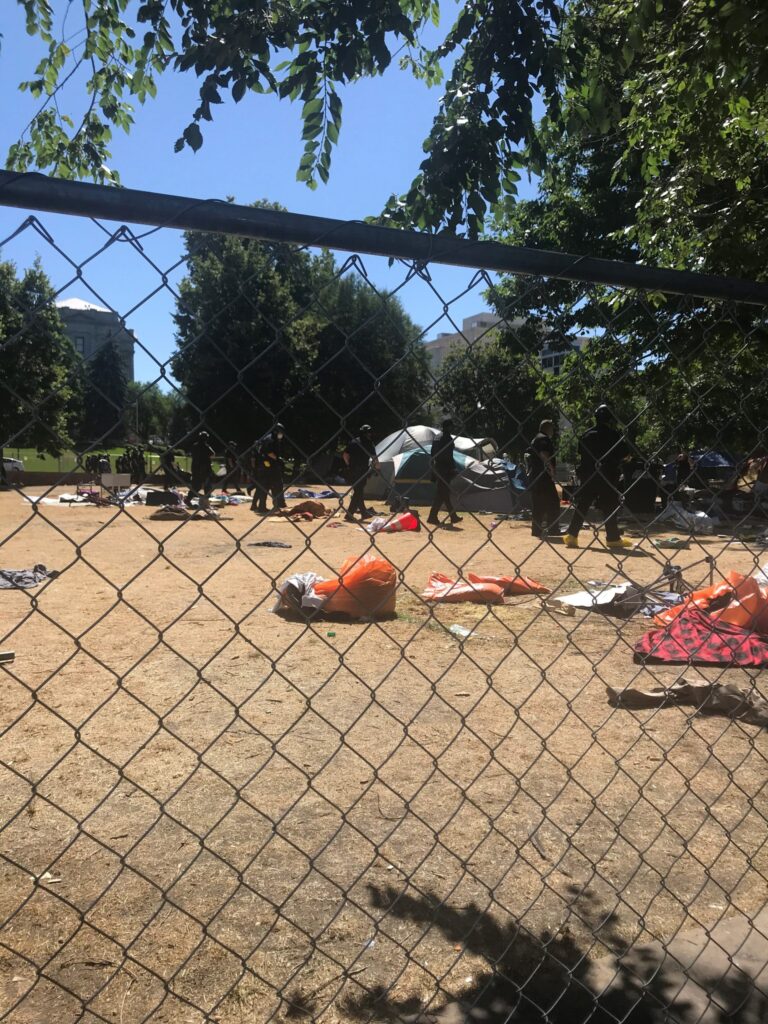 Email the Mayor and Governor – DEMAND JUSTICE
mayorsoffice@denvergov.org and GovernorPolis@state.co.us

LET OUR VOICE BE HEARD.

Stay tuned for more action to end this insanity… 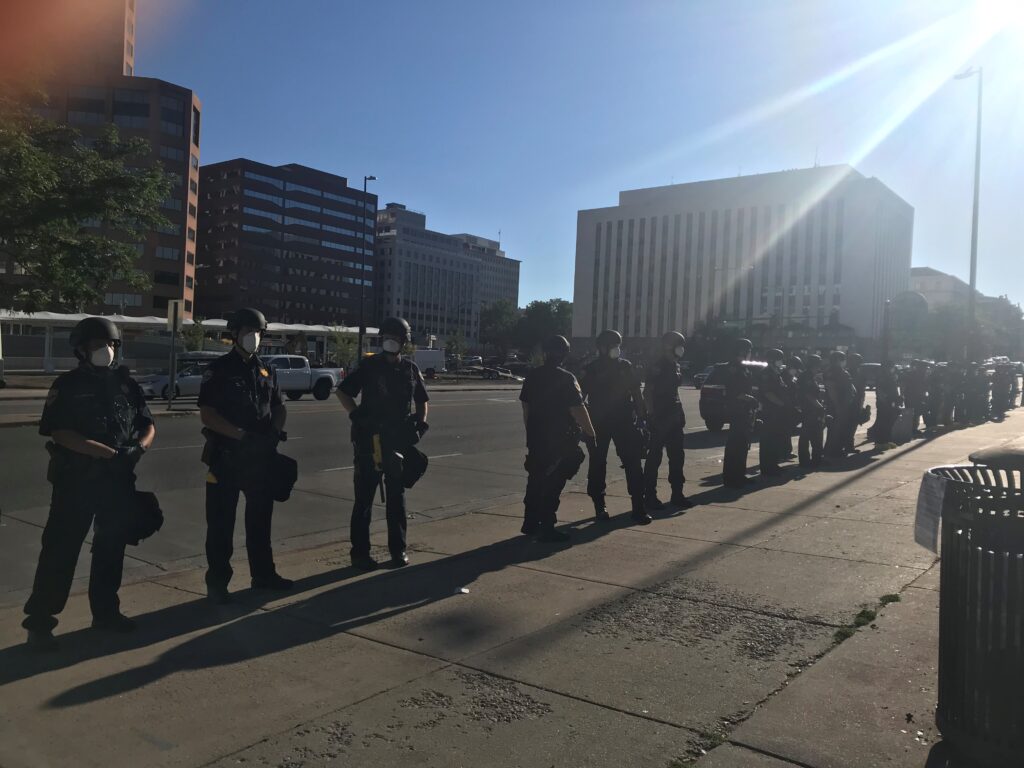