Is it possible that UC Hastings College of the Law, one of the state’s most celebrated public institutions, would allow its pursuit of profit to cloud its defense of the law? We think the answer is yes.

The recent lawsuit filed by UC Hastings College and five plaintiffs against the City of San Francisco for failing to respond to unhealthful conditions in the Tenderloin neighborhood appears reasonable on its face. During the COVID-19 pandemic, the number of unhoused residents sleeping in tents has grown significantly in recent months, as has the number of deaths of persons experiencing homelessness. The City’s efforts during the crisis have been disorganized, inadequate, and often inconsistent with federal Centers for Disease Control & Prevention (CDC) guidelines.

To influence public opinion, UC Hastings used its formidable public relations machine in an all-out blitz in local and national news outlets, including CNN, CBS-News, and the New York Post, as well as Bay Area news media. The barrage of packaged quotes, scripted sound bites and selected photos of tents, were summed up by UC Hastings Dean David Faigman, saying, “We want the tents gone,” which has the City bending over backwards to settle the lawsuit . In that settlement, 70% of the tents, and the people in them, will be gone by July 20th . With the use of law enforcement, they will make sure those tents – people – will never be seen again. This, despite federal CDC guidelines which state, “…clearing encampments can cause people to disperse throughout the community and break connections with service providers. This increases the potential for infectious disease spread.”

In the midst of a global public health pandemic, why would UC Hastings College of the Law risk the health of tent-dwellers and other community residents in this way? Our answer: profit.

In May 2019, Hastings unveiled plans for a massive $450 Million real estate deal with a global development concern, Greystar – more on the developer in a moment – to be built barely a block from the soon-to-be-relocated TL Safe Sleeping Village. Apparently, the village is not so safe after all – not when serious money is involved.

Perhaps UC Hastings motives could be overlooked if the housing in question benefitted the neighborhood residents, but it does not. Perhaps if the Tenderloin community could have provided input into the design and content of the proposed “Academic Village” – but it did not. Perhaps if UC Hastings had chosen a local developer, with roots in the community and a demonstrated commitment to providing construction jobs for community residents had been selected, but it did not.
Indeed, the proposed settlement to the UC Hastings –led lawsuit calls for relocation of tents out of the neighborhood, and discouraging tent dwellers from outside the neighborhood seeking housing – but not students. The students would be part of a different village.

On Tuesday, June 23rd, the Coalition on Homelessness, POOR Magazine, SDA, WRAP, TGI-JP, Do No Harm Coalition, SF Rising, Sunrise Bay Area, Reclaim SF/House the Bay and many other groups are coming together to declare that Black unhoused lives matter at a rally in the TL. Here is the facebook event for the action.

The rally will begin at 3pm on Hyde and McAllister followed by a march to the SFPD headquarters in the TL at around 4. Please come with a face mask and practice social distancing throughout our event

The purpose of the event is to protest the continuing criminalization of homelessness, which is currently being enacted both by SFPD and UC Hastings. An unapproved settlement of the Hastings lawsuit declared that the City will permanently remove 70% of the over 400 tents, while securing shelter for only 15% of the TL’s unhoused. Additionally, the lawsuit calls for enforcement to stop any future encampments. This unapproved settlement leaves our unhoused community extremely vulnerable to police violence and displacement during the global pandemic.

We know what happens when police become first responders to homelessness, and we know Black San Franciscans are particularly vulnerable to the over 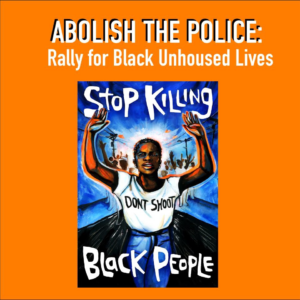 Let’s stand together to say DEFUND SFPD, STOP THE CRIMINALIZATION OF HOMELESSNESS, and tell UC HASTINGS to